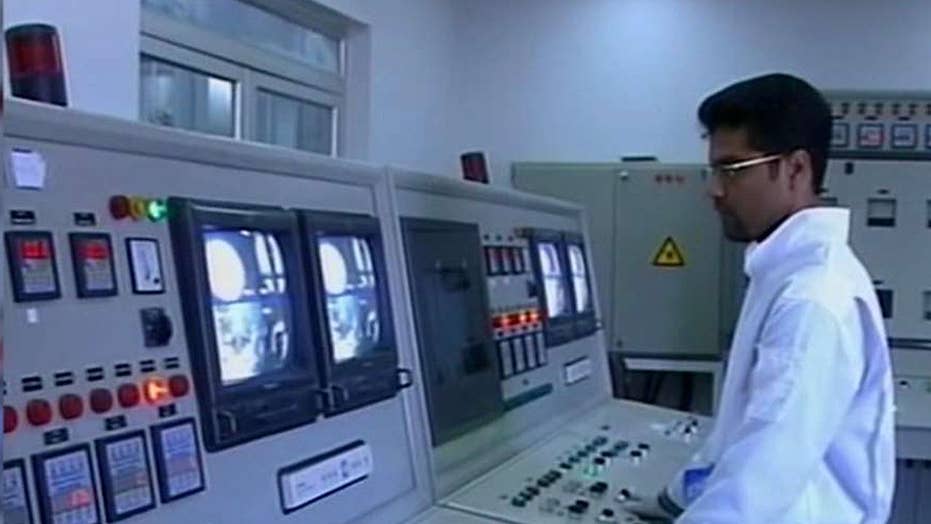 President Trump told reporters in the Oval Office on Monday that Iran is "playing with fire," hours after the country  effectively acknowledged that it was violating the terms of the 2015 multinational nuclear accord and threatened to pursue weapons-grade uranium as soon as July 7.

Earlier in the day, the semi-official Fars news agency in Iran cited an unnamed source as saying that U.N. inspectors had recently weighed Iran's stockpile of low-enriched uranium. According to the report, Iran's stockpile of low-enriched uranium was greater than the 660-pound limit set by the nuclear deal. The Trump administration withdrew the U.S. from the deal more than a year ago.

In a terse written statement Monday, the White House said the development should have been foreseeable to the Obama administration "even before the deal's existence."

The White House also vowed to continue to exert "maximum pressure" on Iran to ensure that the country never obtains nuclear weapons, even as it worked to undo what it called the "mistake" of the previous administration.

"The Iranian regime took action today to increase its uranium enrichment,' the White House said in the statement. "It was a mistake under the Iran nuclear deal to allow Iran to enrich uranium at any level. There is little doubt that even before the deal’s existence, Iran was violating its terms."

Iranian President Hassan Rouhani said this past May that the country would exceed the nuclear deal's limitations on stockpiling uranium. (Iranian Presidency Office via AP, File)

Tensions in the Persian Gulf, where Iranian forces shot down a U.S. drone last month, have escalated sharply in recent weeks, as crippling sanctions imposed by the Trump administration have sent Iran's economy into a tailspin. Some of the sanctions had been suspended under the nuclear deal.

Iran's oil exports have more than halved since sanctions were reinstated and imposed last year, and the rial has lost approximately 60 percent of its value against the dollar. Additionally, the International Monetary Fund (IMF) said inflation in Iran hit 31 percent in 2018, and could continue to rise. The IMF said Iran's economy contracted by 3.9 percent in 2018, and in April forecast a massive economic contraction of as much as 6 percent this year.

After the drone shootdown, the Trump administration hit Iranian Supreme Leader Ayatollah Ali Khamenei and other officials with new sanctions. That prompted Iran's Foreign Ministry to say diplomacy was permanently off the table. Iranian President Rouhani, speaking on television, also mocked the White House and said it is "afflicted by mental retardation."

Iranian Foreign Minister Mohammad Javad Zarif said the country's decision to exceed stockpile limits on Monday was "reversible," but he pleaded again for European countries to work to reduce the sanctions.

"Today, Iran has to stand against U.S. economic sanctions through domestic production and relying on national potentials," Zarif said on state-run media.

The White House statement, however, suggested no compromise.

"We must restore the longstanding nonproliferation standard of no enrichment for Iran," the White House said. "The United States and its allies will never allow Iran to develop nuclear weapons. Maximum pressure on the Iranian regime will continue until its leaders alter their course of action. The regime must end its nuclear ambitions and its malign behavior."

This past May, nuclear officials said Iran had quadrupled its uranium-enrichment production capacity amid tensions with the U.S. over Tehran's atomic program, just hours after Trump and Iran's foreign minister traded threats and taunts on Twitter.

Iranian officials made a point to stress that the uranium would be enriched only to the 3.67 percent limit set under the 2015 nuclear deal with world powers. But by increasing production, Iran steamrolled towards exceeding the stockpile limitations set by the accord.

"Iran's regime has taken new steps to advance its nuclear ambitions," Pompeo said. "Once again, the regime uses its nuclear program to extort the international community and threaten regional security. The world’s top sponsor of terrorism can never be allowed to enrich uranium at any level."

In May, Pompeo revealed that Iran-backed missiles positioned rockets near American military bases in Iraq, prompting the State Department to order non-emergency personnel at the U.S. embassy and consulate there to leave the country.

Understanding how quickly low-enriched uranium could be weaponized is key to recognizing the threat posed by Iran's nuclear program, experts have said. Enriching a supply of uranium means boosting its concentration of the type of uranium that can power a nuclear reaction.