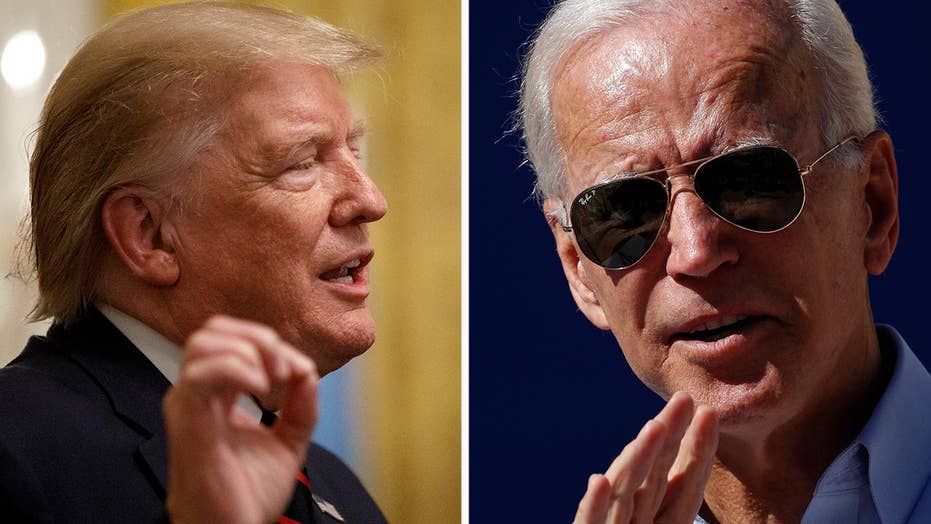 Headlines paint a picture of the president under fire while lamenting treatment of Biden; reaction from Fox News contributor and Democratic strategist Richard Fowler.

As President Trump battles back against arguably the biggest controversy to rock his presidency, a new national poll also points to potential warning signs for one of his top 2020 rivals, former Vice President Joe Biden.

A Monmouth University survey suggests that Biden – one of the co-frontrunners in the Democratic race to face off next year against the president – could suffer some political damage from the Ukrainian allegations that sparked the Democrat-controlled House to formally launch an impeachment inquiry into Trump.

The survey, released Wednesday, indicates that a plurality of voters believed Trump’s accusations against Biden on that issue.

Trump and Biden each face a distinct set of allegations with regard to Ukraine. Trump is under fire from Democrats over his July 25 call with Ukrainian President Volodymyr Zelensky, in which he urged Zelensky to investigate the Biden family over their dealings in Ukraine. A whistleblower, along with Democrats, argue Trump in essence was asking a foreign country to potentially interfere in a U.S. election.

Trump has denied any wrongdoing and has repeatedly described his phone call with the Ukrainian leader as “perfect.”

At the same time, the president has sought to turn the tables on Biden by highlighting allegations against the former vice president and his son that he wanted investigated.

Biden’s son Hunter served on the board of a Ukrainian energy company while his father was vice president. Trump and fellow Republicans have questioned how Biden pushed in 2016 for the dismissal of a Ukrainian prosecutor who was looking into corruption at the company. The prosecutor – who had been widely accused of overlooking corruption in his own office – was later dismissed. Trump’s re-election campaign last week launched a new TV and digital ad targeting Biden over his alleged actions.

The Monmouth poll indicates that 43 percent of registered voters believe Trump’s claim that Biden did pressure Ukrainian officials to keep them from investigating his son’s business ties, with 37 percent not buying the president’s allegations and one in five unsure.

“The fact that 4-in-10 independents are inclined to believe what they have heard from Trump is a warning sign for the Biden campaign. How the candidate fights back against this charge will be crucial to his argument of electability,” Monmouth University Polling Institute director Patrick Murray said in a statement.

Biden's allies maintain he intervened in Ukraine over corruption concerns, not because of his son's work.

And Biden once again emphasized on Wednesday that "there’s zero, zero evidence, of any assertion made."

The survey also spells trouble for Trump, with just four in 10 registered voters continuing to say that the president should be re-elected, compared with 57 percent who say it’s time to have someone new in the White House.

“Trump’s base is sticking with him, but these results suggest that the president remains particularly weak among voting blocs that were crucial to putting him over the top in 2016,” Murray said.

The survey is also the latest to indicate the race for the Democratic nomination is turning into a two-candidate battle between Biden and progressive champion Sen. Elizabeth Warren of Massachusetts.

Warren stands at 28 percent support among self-identified Democrats and Democratic-leaning independent voters, with the former vice president at 25 percent. Warren’s advantage is within the survey’s sampling error.

South Bend, Indiana Mayor Pete Buttigieg is at 5 percent in the survey, along with Sen. Kamala Harris of California. Tech-entrepreneur Andrew Yang and best-selling spiritual author Marianne Williamson are at 2 percent in the poll, with 11 other contenders in the record-setting Democratic field registering at 1 percent or less.

The Monmouth University poll was conducted Sept. 23-29, with 1,161 people questioned by live telephone operators. The survey’s overall margin of error is plus or minus 3.1 percentage points.