US working around United Nations to organize 'friends of Syria' meeting 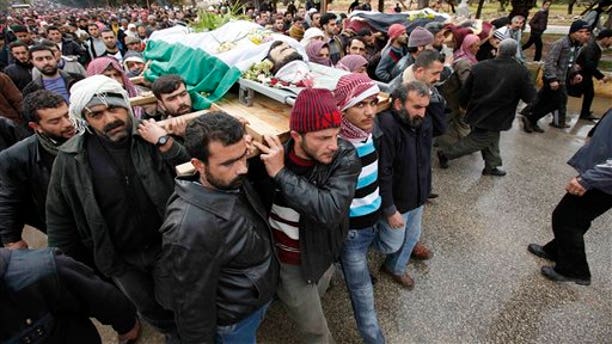 Feb. 9: Mourners carry a body during a funeral for a 10-year-old boy and rebel fighters killed during fighting in Idlib, Syria. (AP)

The Obama administration is working to help organize a so-called "friends of Syria" meeting as part of what the State Department says is a push to work "outside the U.N. system," after the Security Council shot down a resolution against Syrian President Bashar Assad.

Russia and China vetoed the anti-Assad measure despite a new wave of violence in Syria, including a massacre in the city of Homs in which hundreds reportedly were killed. The disappointing weekend session has left the United States and other countries mulling their options to prevent the bloodshed from spreading further.

The State Department said Thursday that its top Mideast envoy, Jeffrey Feltman, has been dispatched to Morocco, France and Bahrain to help put the "friends" meeting together and determine the group's membership and mandate.

Arab League foreign ministers are due to meet Sunday in Cairo and could announce a date and venue for the meeting after that.

"Responsibility for the bloodshed is at the feet of Assad and his regime. And they are the ones who are keeping it going," State Department spokeswoman Victoria Nuland said Thursday. "We want to help the people of Syria have a peaceful alternative, a peaceful way through this, and for Assad to understand that not only does the violence need to end, but that he's lost his right to govern his country, from our perspective."

She said the double veto by Russia and China has "compelled" other nations to work outside of the United Nations.

"That's why you see this sort of groundswell of work now to get this friends group together," she said.

France and Turkey, both of which have historic and commercial interests in Syria, have offered to host the meeting. Morocco, which sponsored the U.N. Security Council resolution calling for Assad to step down, is also a candidate.

Nuland said the group would look at three "tracks" -- economic sanctions, support for a democratic transition and "humanitarian support" for the people of Syria.

"That's an issue that's going to take quite a bit of work among us," she said of the latter.

Some lawmakers have suggested the U.S. consider military aid for the rebels in Syria, though administration officials have pushed back on that approach. The Times of London quoted one source saying U.S. officials nevertheless were looking at contingency plans to give military aid to the opposition.

Feltman was in Morocco on Wednesday and was meeting Thursday in Paris with French officials as well as with Qatari Prime Minister Hamad bin Jassim, who is there visiting, Nuland said. In Bahrain for a security conference later this week, Feltman will see other Arab and European officials. Secretary of State Hillary Clinton plans to meet Turkish Foreign Minister Ahmet Davutoglu in Washington on Monday.

In Morocco, Foreign Minister Saadeddin el-Othmani confirmed that Morocco is a candidate to host the meeting but stressed that "nothing is fixed." He said he expected more clarity on the matter after Sunday's Arab League meeting.