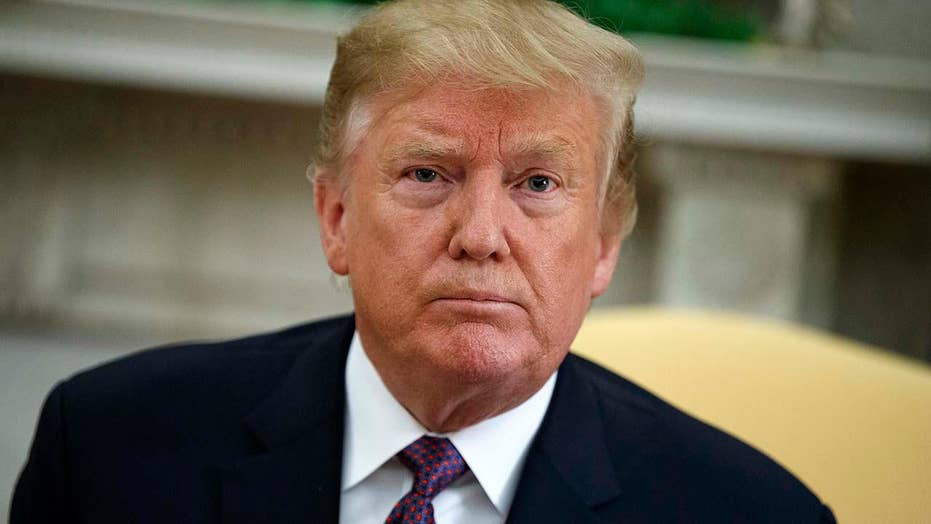 It's possible that the 2020 presidential election could hinge on the past few days.

The scrap with China over tariffs and the stock market plunge could reshape the presidential sweepstakes. A post-mortem of the 2020 presidential election could focus on events of May 2019 as pivotal to President Trump's success or failure at the polls, to say nothing of other races down ballot.

The economy is sizzling now, as the president is quick to remind everyone. But staggering stock market dips from the trade war with China could erase economic gains. The U.S. slapped China with $200 billion in tariffs after failed trade talks last week. China retaliated with $60 billion in retaliatory tariffs of their own.

Yet Trump asserts that the U.S. "is in a great position" on tariffs and says farmers will be "very happy" with his efforts.

"I love the position that we’re in," the president said Monday.

Even so, National Economic Council Chairman Larry Kudlow conceded Sunday that China won't pay all of the tariffs. Rather, American consumers and families will bear much of the burden.

Larry Kudlow on fallout from rising trade tensions with China

The Trump administration increased tariffs on $200 billion in Chinese goods after the latest round of trade talks between the U.S. and China failed to produce an agreement.

The average American household could pay an extra $800 a year. Manufacturers of big farm equipment are already taking a hit. Soybean farmers are exhausted by the grim outlook for their commodity. Many farmers were willing to stand behind the president last year when the U.S. and China struggled to iron out an accord. Now agriculture and stock prices are in a freefall and people wonder how long those voters – the core of President Trump’s coalition – are willing to stand behind him this time.

"China has been taking advantage of the United States for many, many years," Trump told reporters in the Oval Office Monday. He’s right. There's a reason why Senate Minority Leader Chuck Schumer, D-N.Y. urged the President to "hang tough" against Beijing last week.

"China will take advantage of us decade in, decade out, unless we are strong with them," Schumer said. "That is what we have to do, and it will help America in the long run."

But a lack of progress will paralyze the farm economy. Just last year, the Trump administration offered farmers $12 billion to cover trade losses. Now the President is pushing for a $15 billion handout to make up the difference in new financial erosion.

"Trump shouldn't give up on securing an enforceable agreement that holds China accountable for its abusive trade practices. Stalling, bullying tactics and threats to completely block American products from entering Chinese markets shouldn't be rewarded," said Sen. Chuck Grassley, R-Iowa, in a statement Monday. "There's no doubt Americans will be harmed, including farmers, businesses and consumers in my home state of Iowa, if the additional tariffs take effect. Americans understand the need to hold China accountable. But they also need to know that the Administration understands the economic pain they would feel in a prolonged trade war."

So much for Republicans historically backing the marketplace and free enterprise. Don’t forget how conservatives assailed then-President Barack Obama and Congressional Democrats in 2009 for the $700 billion economic stimulus package to jumpstart the economy after the financial collapse.

These days, the markets are in a tailspin as the trade war mushrooms. On Monday, the Dow dipped to its lowest close since Feb. 11. Both the Dow and the S&P 500 suffered their steepest losses since Jan. 3. The NASDAQ declined to its lowest ebb since Dec. 4.

Meanwhile, the U.S. is nowhere near any trade deal with China – let alone one which Congress would ratify.

The administration talks repeatedly about a new trade pact between the U.S., Mexico and Canada, called the USMCA. Rep. Kevin Brady, R-Texas, the top GOPer on the House Ways and Means Committee, recently declared there's growing support for the new deal, but there is nothing close to moving through the House and Senate.

BRIT HUME: TRUMP 'BADLY NEEDS' CHINA STRATEGY TO BE A SUCCESS AHEAD OF 2020 ELECTION

"We need to take them head-on. I think a good, solid agreement with China could actually create a new era of fair trade with China for our farmers, our workers and our businesses," said Brady. "This is leverage. So keep everyone at the table."

Of course, fortunes could change for everyone if the sides actually secure an international agreement along with bipartisan buy-in for passage on Capitol Hill. The fight and the market plummet will all be worth it. And heretofore, no one has been willing to take on China in quite the same way as Trump. Lawmakers on both sides of the aisle have long complained about exploitive Chinese practices with little retribution from the U.S. A big win could alter the playing field for everyone.

That said, most Republicans who support the president are trying to stay clear of the battle.

Others, like Sen. Kevin Cramer R-N.D., backed a second rescue package for farmers, even if it flies in the face of conservative values.

"When the government creates the problem, they're responsible for solving the problem," said Cramer. “If it was a free market, we wouldn't be issuing tariffs."

"We've done that before but it never worked out very well," said Blunt. "Farmers don't want payments in lieu of selling crops at a fair price."

Still, it’s unclear how long farmers and others will march in lockstep with Trump.

"There's still a number of them who are patient with him," said Cramer.

"They have a lot of confidence in the President," agreed Blunt.

Despite their faith, Cramer noted that the current impasse between Washington and Beijing can’t go on forever.

"This is the make or break growing season for many of them," said Cramer. "This might be their last season with the banks."

And if the shockwaves from the trade war rattle the economy and the Trump coalition, it’s possible analysts could point to the past few days as the most pivotal moment of the 2020 campaign.