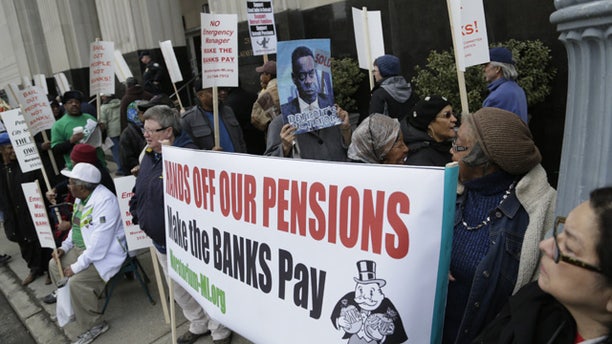 Union leaders in Detroit want $100 million in federal funding earmarked for homeowner assistance to help make up a $3.5 billion shortfall in the retirement system for city workers, The Wall Street Journal reported Wednesday.

Under the plan being discussed by federal and state officials, Michigan would give Detroit $100 million earmarked for the state from a U.S. Treasury Department fund established in 2010 to provide relief to struggling homeowners in the wake of the housing crisis, according to the report.

Officials familiar with the discussions told The Wall Street Journal that Detroit emergency manager Kevyn Orr could use the unspent funding earmarked for blight elimination to help reduce pension cuts for city employees.

"There is no bailout coming from Washington, but we continue to support the efforts by state and local officials as they work on Detroit's revitalization," the White House said in a statement Wednesday.

Under the proposed deal for federal money, many officials at the local and state level in Michigan would need to agree with transferring $100 million to free up additional money for the pension system, The Wall Street Journal reported.

The city has an $816 million pledge from foundations, philanthropists and Gov. Rick Snyder to shore up pension funds and prevent the sale of city-owned art as part of Detroit's strategy for exiting the largest public bankruptcy in U.S. history.

Retired police officers and firefighters would see smaller cost-of-living payments but no cut in pension benefits under the deal. Detroit's other retirees, who have smaller pensions, would get a 4.5 percent cut and elimination of yearly inflation allowances under a separate compromise.

Retirees and city employees who qualify for a pension will get a ballot in a few weeks. If they don't support the plan, the $816 million vanishes and deeper pension cuts are inevitable, Orr has warned.

Michigan House Speaker Jase Bolger, R-Marshall, who is supporting a plan to commit $350 million in state dollars to Detroit pensions, told The Associated Press the city's unions should put money in the pot — and not just in the form of concessions from members.

"They have profited from these contracts. They have collected union dues. They should step forward and join in mitigating the effects of the bankruptcy," he said.

State aid for Detroit is tricky for the Republican governor and lawmakers who are uncomfortable with talk of a "bailout." Some legislators are worried about the rescue setting a precedent if other cities collapse. Draft legislation is in the works; the money could be diverted from tobacco settlement funds that Michigan receives each year or come from securitizing future payments to get a lump sum up front.

One potential advantage for Snyder is that southeastern Michigan is home to many lawmakers who want to see the city turn a page. Nearly five of every 10 lawmakers represent parts of Wayne, Oakland or Macomb counties. City retirees at risk of significant pension cuts without state aid also live in many of those districts.