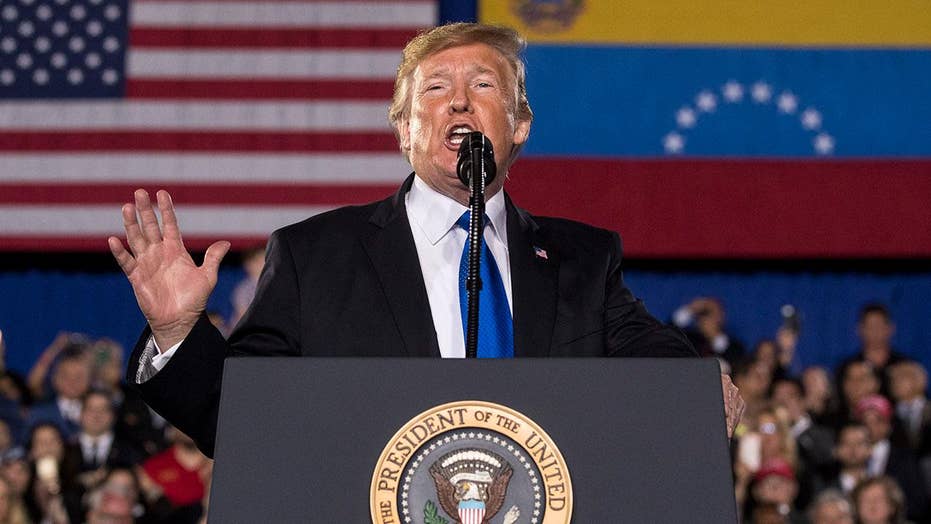 Socialism is dying and liberty is being reborn, President Trump tells supporters in Miami, Florida.

President Donald Trump, speaking in a major foreign policy address in Miami to members of the Venezuelan community, declared Monday that "a new day is coming in Latin America" and issued a stark assessment that "socialism is dying" across the world.

In a wide-ranging rebuke of socialism that seemed targeted as much at Venezuela, Cuba, and Nicaragua as it was at congressional Democrats, Trump remarked: "We know that socialism is not about justice, it's not about equality, it's not about lifting up the poor -- it's about one thing only: power for the ruling class. And, the more power they get, the more they crave. They want to run health care, run transportation and finance, run energy, education, run everything. They want the power to decide who wins and who loses, who's up and who's down, what's true and what's false, and even who lives and who dies."

Before a supportive and raucous crowd at Florida International University in Miami Trump announced, flanked by large American and Venezuelan flags, "This will never happen to us. ... To those who would try to impose socialism on the United States, we again deliver a very simple message: America will never be a socialist country."

The address was the second time Trump publicly and forcefully has condemned what he has called "the horrors of socialism and communism" and "massive wealth confiscation" in recent weeks, following his similar vow during the State of the Union address that "America will never be a socialist country."

That remark, which left Sen. Bernie Sanders, I-Vt., and Rep. Alexandria Ocasio-Cortez, D-N.Y., stone-faced, came as part of a larger condemnation of disputed President Nicolas Maduro for "turning that nation from being the wealthiest in South America into a state of abject poverty and despair" through a mixture of "brutality" and "socialist policies."

Venezuelan boys holding cups of a grape-flavored drink, part of the free lunch that is given out daily at the "Divina Providencia" migrant shelter in La Parada, near Cucuta, Colombia, on the border with Venezuela, on Monday. (AP Photo/Fernando Vergara)

On Monday, Trump hammered that theme repeatedly and called on Venezuela's military to rise up and take on Maduro, who has blocked U.S. humanitarian aid shipments.

DEMS SIT EXPRESSIONLESS AS TRUMP DECLARES SOCIALISM WILL NEVER COME TO THE U.S.

As the crowd chanted "USA," Trump, who was joined by first lady Melania Trump, Secretary of State Mike Pompeo, and National Security Adviser John Bolton, asserted, "The people of Venezuela stand at the threshold of history -- ready to reclaim their country and to reclaim their future. Not long ago, Venezuela was the wealthiest nation by far in South America. But, years of socialist rule have brought this once-thriving nation to the brink of ruin.

"The results have been catastrophic," Trump continued. "Almost 90 percent of Venezuelans now live in poverty. In 2018, hyperinflation in Venezuela exceeded one million percent. Crippling shortages of food and medicine plague the country. Socialism has so completely ravaged this great country that even the world's largest reserves of oil are no longer enough to keep the lights on."

As the monthslong political crisis in Venezuela continued, Trump took multiple generalized shots at socialism that pointedly were not limited to the country's borders.

"America will never be a socialist country."

"The days of socialism and communism are numbered not only in Venezuela, but in Nicaragua and Cuba as well," Trump said, as the crowd roared. "Do we love Cuba? Do we love Nicaragua? Great countries. Great potential."

SOCIALIST OCASIO-CORTEZ SAYS TRUMP IS 'SCARED' OF SOCALISM, AS AMAZON BAILS ON NYC

Trump again declared that Guaido was the country's rightful president amid what he called an unprecedented "humanitarian disaster." He also made a public case to Venezuela's military, which has remained loyala to Maduro and could play a decisive role in the stalemate, to support Guaido's government.

Trump issued a dire warning to Venezuela's military that if they continue to stand with Maduro, "you will find no safe harbor, no easy exit and no way out. You will lose everything."

Trump added: "We seek a peaceful transition of power, but all options are open."

Trump urged the Venezuelan military to accept Guaido's offer of amnesty and refrain from violence against those opposing Maduro's government. And he praised the Venezuelan opposition, saying of the people of Venezuela, "They are turning the page on dictatorship and there will be no going back."

Free lunches prepped with lentils, a slice of bologna, rice and a piece of plantain ready to be served at a migrant shelter in La Parada, near Cucuta, Colombia, on the border with Venezuela, Monday. (AP Photo/Fernando Vergara)

The Maduro-controlled military has blocked the U.S. from moving tons of humanitarian aid airlifted in recent days to the Colombian border with Venezuela. The aid shipments have been meant in part to emphasize the hyperinflation and shortages of food and medicine that are gripping Venezuela.

"Unfortunately, Dictator Maduro has blocked this life-saving aid from entering the country. He would rather see his people starve than give them aid, than help them," Trump said. "Millions of Venezuelans are starving and suffering while a small handful at the top of the Maduro regime plunder the regime into poverty and death. We know who they are and we know where they keep the billions of dollars they have stolen."

The aid is supposed to be moved into Venezuela on Feb. 23 by supporters of Guaido. But, Maduro has called the aid unnecessary and said it constituted an attempt to destabilize his government.

Trump delivered the remarks to a supportive audience at Florida International University in Miami. South Florida is home to more than 100,000 Venezuelans and Venezuelan-Americans, the largest concentration in the country. Trump has largely been spending the holiday weekend at his private club in West Palm Beach.

On Sunday, Florida Republican Sen. Marco Rubio -- whom Trump invoked in his Monday address -- visited a border staging point for U.S. aid to Venezuela and warned soldiers loyal to Maduro that it would be a "crime against humanity" if they blocked entry of the goods being channeled through Maduro's rivals.

An enthusiastic throng of Venezuelan migrants, some chanting "Rubio! Liberty," met the senator as he visited Cucuta and held a news conference in sight of a border bridge that has been flooded in recent months by people escaping the hardships of Venezuela's hyperinflation and severe shortages of food and medicine.

While Russia, China, Turkey and a large number of Asian and African countries still back Maduro, Rubio dismissed them, saying in English: "The countries that support Maduro do not surprise us. All of them are corrupt and none of them is a democracy and many of them are owed billions of dollars that they want to get paid by the corrupt regime."