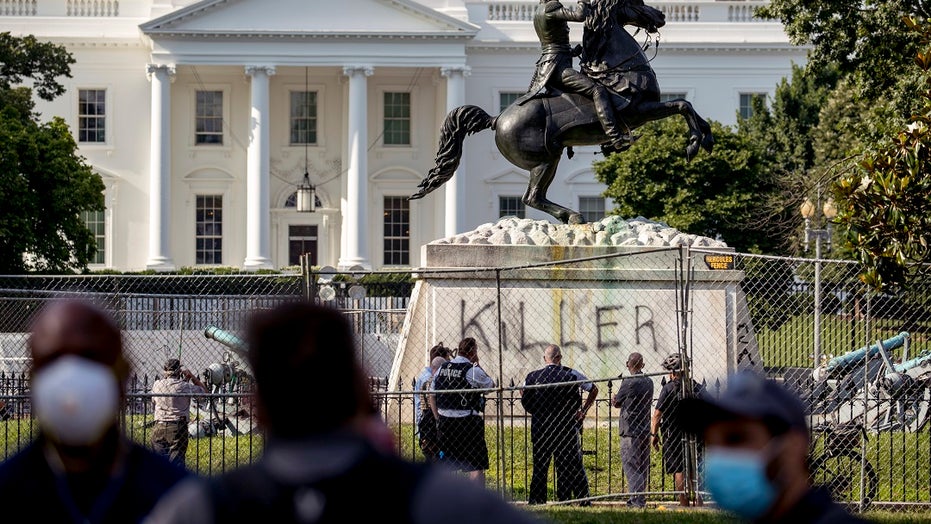 President Trump on Friday tweeted an FBI poster featuring images of 15 suspects who authorities believe vandalized a statue of Andrew Jackson that protesters unsuccessfully tried to bring down during clashes with police in Washington, D.C., earlier this week.

"MANY people in custody, with many others being sought for Vandalization of Federal Property in Lafayette Park. 10 year prison sentences! @FBIWFO," Trump wrote.

Hundreds of protesters gathered Monday in Lafayette Park, near the White House, and tried toppling the statue of the seventh president with ropes and chains before police dispersed the crowd. Nine people were arrested Tuesday night and a total of 12 were arrested between Monday and Wednesday, according to Washington, D.C., police.

Trump has previously expressed admiration for Jackson, a slaveowner who has been the target of protesters in the past. Last year, he halted plans to replace Jackson with abolitionist Harriet Tubman on the $20 bill.

Monday's gathering came amid a series of incidents in which monuments of Confederate soldiers and other historical figures with racist pasts have been attacked.

KARL ROVE SAYS TRUMP IS CLEARLY TRAILING BIDEN: HERE ARE THREE THINGS HE MUST DO TO TURN IT AROUND

The White House is visible behind a statue of President Andrew Jackson in Lafayette Park on Tuesday in Washington, with the word "Killer" spray-painted on its base. Protesters tried to topple the statue Monday night. (AP Photo/Andrew Harnik)

The backlash against the figures evolved out of protests over the death of George Floyd while in police custody last month, prompting a racial reckoning in the U.S. against racial injustice and police brutality. Demonstrators have since become emboldened about targeting statues deemed offensive.

Trump is expected to sign an executive order to add protections to such monuments and memorials. On Tuesday, he weighed in on the issue after a statue of Confederate general Albert Pike was pulled down on June 19, Juneteenth -- the day marking the end of slavery in the U.S. --  in Washington.

“I have authorized the Federal Government to arrest anyone who vandalizes or destroys any monument, statue or other such Federal property in the U.S. with up to 10 years in prison, per the Veteran’s Memorial Preservation Act, or such other laws that may be pertinent.....” he posted.