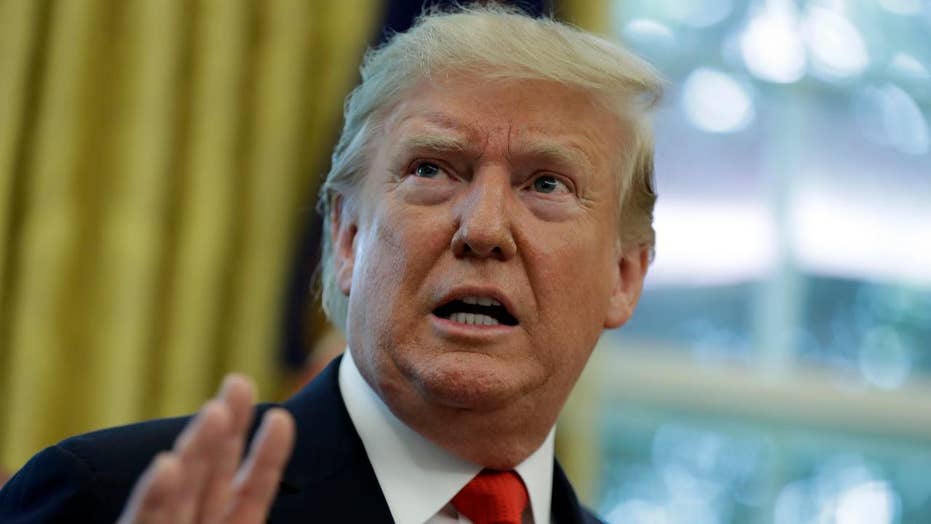 President Trump on Wednesday talked up the ongoing efforts to construct or replace barriers along the southern border with Mexico, saying he expects the project to be completed in key areas by the end of next year.

Speaking to reporters in the Oval Office, Trump said construction is moving along “rapidly” and that he expects “close to 500 miles of wall” to be “almost complete if not complete by the end of next year,” specifically “just after the election.”

DEFENSE SECRETARY SIGNS OFF ON SPENDING $3.6B TO BUILD 175 MILES OF BORDER WALL

“We’re building different sections simultaneously,” Trump said, stating that by the end of 2020 there will be walls up that will “take care of all the areas we wanted,” as well as “some of the marginal areas” that were of a lower priority.

Various forms of barriers already have existed along 654 miles — about a third — of the border.

The administration has awarded $2.8 billion in contracts for barriers covering 247 miles, with all but 17 miles of that to replace existing barriers instead of expanding coverage.

The president’s statements come on the heels of Pentagon officials telling Fox News that Secretary of Defense Mark Esper signed off on $3.6 billion in Defense Department construction funds for 175 miles of wall on the border.

The president referenced the Supreme Court’s August ruling that cleared the way for the government to use about $2.5 billion, after funding had been frozen by lower courts while a lawsuit was proceeding.

Trump had directed $155 million to be diverted to border facilities from FEMA disaster relief. When asked if he was still comfortable with this decision given the ongoing presence of Hurricane Dorian, Trump pointed out that the storm so far has not required the level of action the administration predicted.

“We’re using much less here than we anticipated,” Trump said, as officials had initially expected Dorian to hit Florida much harder than it has.

Acting FEMA Administrator Pete Gaynor said Sunday, as Dorian made its approach, that his agency was well prepared to address the challenges posed by the storm, despite the money being diverted to the border.

“We have plenty of money and resources,” Gaynor told “Fox News Sunday,” claiming the loss of that money “is not affecting our preparedness whatsoever for Dorian.”