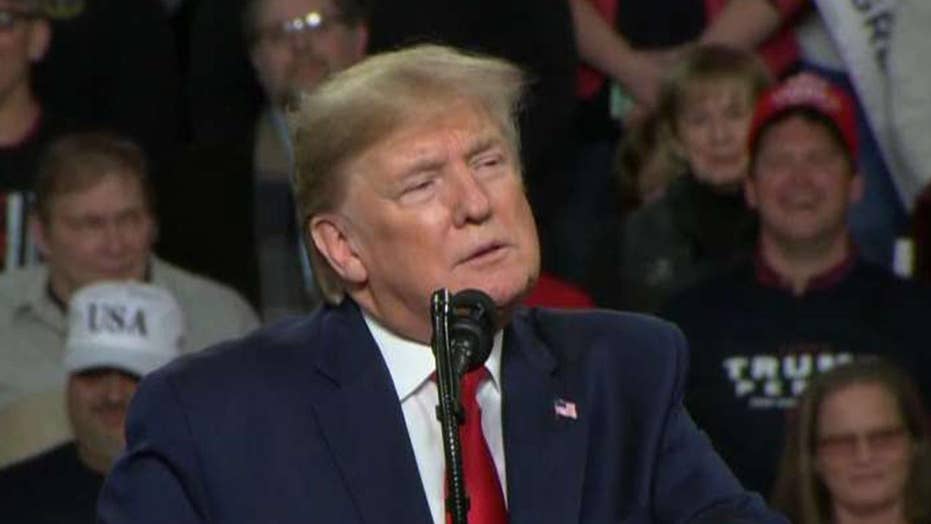 Flush with campaign cash and facing down a possible Senate impeachment trial, President Trump headlined his first major rally of the election year Thursday in Ohio -- and almost immediately, the president capitalized on his order to take out Iranian commander Qassem Soleimani after the military leader was said to have orchestrated an attack on the U.S. Embassy in Iraq.

In unequivocal terms, Trump slammed House Democrats' nonbinding War Powers Resolution, which passed earlier in the day in a rebuke to the Soleimani strike. Trump went on to suggest that Democrats, including House Speaker Nancy Pelosi and "Liddle' pencil-neck" House Intelligence Committee Chairman Adam Schiff, D-Calif., would have tipped off the media about the operation had they known about it.

The president added that it would have been impractical to alert Congress, given the "split-second" nature of the decision to kill Soleimani. He also revealed for the first time that U.S. intelligence indicated Soleimani was actively plotting attacks on other U.S. embassies.

"Soleimani was actively planning new attacks, and he was looking very seriously at our embassies, and not just the embassy in Baghdad," Trump said.

Separately, Trump said he hoped former Vice President Joe Biden would become the Democrats' presidential nominee, and pledged he would highlight what he called the Bidens' corruption all throughout the campaign.

"He will hear, 'Where's Hunter?',' every single debate nine times at the podium," Trump vowed, in reference to Biden's son, who largely has stayed out of public view after it emerged that he held lucrative overseas board roles while his father was vice president.

Republicans have accused Hunter Biden, who recently was determined to have fathered a child with an Arkansas ex-stripper, of selling access to his father.

Trump was speaking before a packed crowd in Toledo after apparently pulling back from the brink of war with Iran earlier this week, and just hours after officials announced that Iran likely shot down a civilian airliner carrying dozens of Canadians, apparently by mistake. Canadian Prime Minister Justin Trudeau suggested the U.S. might bear responsibility, and he declined to condemn Iran for taking down the commercial plane.

For the most part, the rally focused on the Iran strike and the response to it from the political left.

Trump said he had acted swiftly after the earlier attack at the U.S. Embassy in Baghdad and essentially overruled a commander who said the military response would not arrive until the next day. The situation, Trump said, easily could have become "another Benghazi" -- a reference to the deadly 2012 attack at the U.S. consulate in Libya.

"I said, 'nope, get in the planes right now, have them there immediately!'" Trump said. "And, they got there immediately. ... If you dare threaten our citizens, you do so at your own grave peril."

Former President Obama, Trump added, had erred by giving billions to Iran as part of the mostly defunct Iran nuclear deal, including a massive cash payout loaded onto U.S. aircraft.

"By subsidizing Iran's maligned conduct, the last administration was leading the world down the path of war," Trump said. "We are restoring our world to the path of peace, peace through strength."

The campaign event offered Trump an opportunity to spotlight before a friendly crowd his decision to order the deadly drone strike against Soleimani, while keeping the U.S. -- at least for the moment -- out of a wider military conflict.

Tucker: Biden lashes out at Trump for not embracing open borders

"Unemployment has reached the lowest level in over 51 years," Trump said. "African-American, Hispanic American and Asian American unemployment have all reached the lowest rates ever, ever, ever recorded. Wages are rising fast, and the biggest percentage increase -- makes me happy -- are for blue-collar workers. Forty million American families are now benefiting from the Republican child-tax credit, each receiving an average of over $2,200 a year."

Trump added that getting rid of "job-killing regulations" had helped spur the industrial sector. He later invoked the destructive and widespread "yellow vest" protests in France, which had started out of frustration with high taxes on gas.

"If you dare threaten our citizens, you do so at your own grave peril."

"America lost 60,000 factories under the previous administration ... They're all coming back," Trump said. "And, right now, just in a very short period of time, we've added 12,000 brand new factories and many more are coming in."

The Democrats' policies, Trump argued, have produced chaos and poverty. Trump specifically ripped Pelosi, D-Calif., for living in a mansion in San Francisco, even as her "disgusting" district filled with homeless people defecating on the streets.

Trump additionally touted the recent appellate court ruling that green-lit funding for his border wall, slammed "late-term abortion and ripping babies right from the mother's womb right up until the mother's womb," and highlighted Obama's broken promise to ensure Americans could keep their doctors under his health-care plan.

"We caught a total monster, and we took him out, and that should have happened a long time ago,” Trump said before departing Washington earlier in the day.

Last week’s killing of Soleimani brought long-simmering tensions between the U.S. and Iran to a boil. Iran, in retaliation, fired a barrage of missiles this week at two military bases in neighboring Iraq that have housed hundreds of U.S. troops. But, with no reported injuries to U.S. or Iraqi troops, Trump said he had no plans to take further military action against Iran and instead would enact more sanctions against the Islamic Republic.

The Iran crisis, which momentarily overshadowed Trump's looming impeachment trial, also has opened a new front in the 2020 presidential campaign for Trump, who in 2016 campaigned in part on a promise to end American involvement in "endless wars."

Trump entered the election year flush with over $100 million in campaign cash, a low unemployment rate and an unsettled field of Democrats seeking to challenge him. Yet, polling showed he remained vulnerable.

Back in December, an AP-NORC poll showed Trump's approval rating at 40 percent. No more recent major polls have emerged to gauge support for the president in the wake of the targeted killing of Soleimani, though opinions of Trump have changed little over the course of his presidency.

Trump has never fallen into historic lows for a president’s approval ratings, but Gallup polling showed his December rating registered lower than that of most recent presidents at the same point in their first terms. Notably, approval of Trump and Obama in the Decembers before their reelection bids was roughly the same.

For Trump to win reelection, securing Ohio's 18 electoral votes will be critical. He won Ohio by eight points in 2016, after Obama held the state in 2008 and 2012. The visit to Toledo marked Trump's 15th appearance in Ohio as president.

Trump has anchored his reelection messaging around a solid national economy with an unemployment rate of 3.5 percent. But, people in parts of the industrial Midwest have said they've been left behind, especially as the manufacturing sector has struggled over the past year in response to slower worldwide economic growth and trade tensions with China.

Labor Department figures showed construction and factory jobs slumping in Ohio. In nearby Michigan, manufacturers were shedding workers as well, but so were that state’s employers in the health care, education and social assistance sectors.

But the Toledo area pointed at an even more alarming trend in an otherwise healthy economy. The Glass City has shedded over 6 percent of its white-collar jobs in the professional and business services sector over the past year, causing the total number of jobs to slump slightly from a year ago.

As an incumbent, Trump has been able to use his position to build a massive campaign cash reserve at a time when Democrats have been raising and spending theirs in a competitive primary. Although many White House hopefuls, most notably Vermont Sen. Bernie Sanders and former South Bend, Ind., Mayor Pete Buttigieg, have pulled in massive sums, there has been no clear front-runner, and many party officials have been girding for a protracted contest that could further bleed the eventual nominee of resources.

Trump, meanwhile, raised $46 million in the final quarter of 2019 and had over $102 million cash on hand at the end of the year. The Republican National Committee [RNC], which hasn’t faced as strict a set of contribution limits as the candidate, raised even more. Under the current rules, the RNC won’t have to release its December fundraising numbers until the end of the month.

Asked how much he was willing to spend on his reelection, Trump said, "I literally haven't even thought about it." He added: "I will say this: Because of the impeachment hoax, we're taking in numbers that nobody ever expected. You saw the kind of numbers we're reporting. We're blowing everybody away."