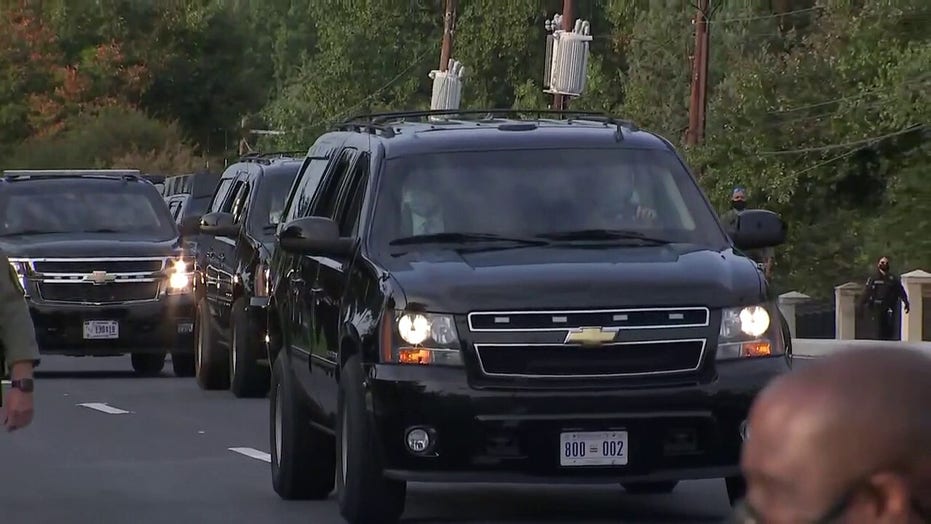 President Trump waves to supporters outside Walter Reed in motorcade

President Trump tweeted out a video of himself at Walter Reed Medical Center on Sunday where he said he's learned a lot about the novel coronavirus and promised his supporters gathered out side the hospital "a little surprise."

"We're going to pay a little surprise to some of the great patriots that we have," Trump said. "They've been out there for a long time and they've got Trump flags and they love our country so I'm not telling anybody but you but I'm about to make a little surprise visit."

Shortly after sending out his tweet, the president made his surprise appearance when he briefly left the hospital and drove by, waved and gave a thumbs up to the groups of supporters gathered outside in Maryland before returning to Walter Reed shortly after.

The White House said that "appropriate precautions" were taken for Trump's trip and that the drive was cleared by the medical staff at Walter Reed.

“Appropriate precautions were taken in the execution of this movement to protect the President and all those supporting it, including PPE," White House Deputy Press Secretary Judd Deere said in a statement. "The movement was cleared by the medical team as safe to do.”

Earlier in the day, the president offered his thanks to the supporters for rallying outside Walter Reed, where he is battling a case of the novel coronavirus.

"I really appreciate all of the fans and supporters outside of the hospital," the president tweeted Sunday. "The fact is, they really love our Country and are seeing how we are MAKING IT GREATER THAN EVER BEFORE!"

Dozens of people gathered for an event hosted by 'Women for America First', with Trump 2020 signs for a prayer vigil Saturday night.

Music that normally played at Trump rallies blasted over a loudspeaker as some people sold MAGA hats and Trump cookies. Some supporters prayed for the president, while others yelled "Shame! Shame! Shame!" at reporters and tried to disrupt live shots for television reports.

Supporters returned later Sunday morning, waving flags and honking car horns. Flowers were piling up on the sign outside the main entrance to the facility.

Trump was admitted to Walter Reed Friday after he announced that he and the First Lady had tested positive for the coronavirus.

Trump was later sent to the hospital and placed on oxygen, but White House physician Dr. Sean Conley assured the public he was “extremely happy with the progress” the president was making.

Though a senior administration official told Fox News that, “Early indications are for an extremely good prognosis - but the next 48 hours will be critical.”

Trump has received two doses of Remdesivir so far, an anti-viral drug that has been approved by the FDA to help treat the coronavirus.

Questions regarding Trump’s ability to continue campaigning in the lead up to the election, just weeks away, have surfaced.

And congressional Democrats have used the president’s illness to suggest delaying the confirmation hearings of Trump’s Supreme Court nominee, Amy Coney Barrett – though GOP senators have said Trump’s diagnosis will not slow down any congressional procedures.

Amy Kramer, the founder of the hosting organization, encouraged people that could not attend the candle-light pray vigil Saturday night, to “Light a candle in your home and pray,” in a tweet.

But both Republicans and Democrats have voiced their support and well wishes for a “speedy recovery” on Twitter.

The social media platform was quick to address negative tweets voicing support for the president succumbing to the virus that has already killed more than 209,000 Americans and infected over 7.3 million in the U.S.

“Tweets that wish or hope for death, serious bodily harm or fatal disease against anyone are not allowed and will need to be removed,” a Twitter spokesperson posted following the announcement that the president had been submitted to the hospital.