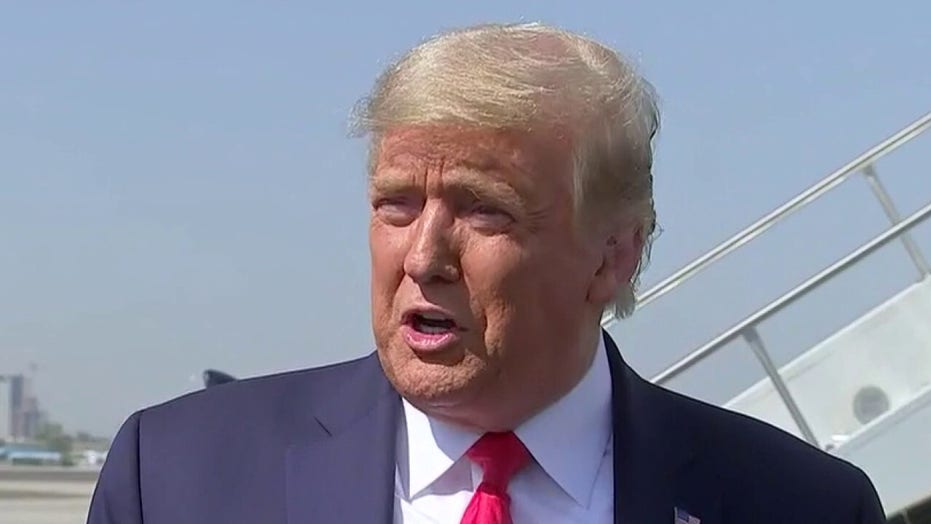 President Trump on Monday continued to try and portray Joe Biden, his Democratic challenger, as a “corrupt politician” and said the former vice president is lucky Attorney General William Barr was so fair because he knows people that “would have had him locked up five weeks ago.”

“Bill Barr is a very nice man,” Trump told a rally in Prescott, Ariz. “And a very fair man.” He said somebody else wouldn’t take all that "crap and corruption.”

Trump was likely referring to recent reports about emails purportedly found on a laptop that belonged to Biden’s son, Hunter, that related to his son’s work with  Burisma, a Ukrainian natural gas giant. Biden, who finds himself leading in national polls, has dismissed the reports as a “smear campaign.”

Trump, meanwhile, seized on the emails as evidence that Hunter Biden used his father’s position as vice president under President Obama to benefit his business career. Trump has essentially accused Biden of selling access.

Trump mentioned Biden’s “criminal enterprise” family a day earlier at a Nevada rally, and the crowd chanted, “lock him up.” The chanting was reminiscent of his 2016 campaign when he took on Hillary Clinton and accused her of improprieties relating to her email server. The State Department concluded its investigation in 2019 and said it found “no persuasive evidence of systemic, deliberate mishandling of classified information.”

Nick Merrill, a Clinton spokesman, tweeted at the time that, “For the umpteenth time the email story is put to bed w/ a clear recognition it was a pointless crusade that took away from so many other issues we should have been discussing in ’16.”

Biden’s campaign did not respond to an email late Monday from Fox News.

The New York Post, which broke the story about the laptop, showed a 2015 email purported to show a top adviser for Burisma thanking Biden for giving him an opportunity to meet his father when the older Biden was serving as vice president.

The Biden campaign and a lawyer for Hunter Biden said they had no record of such a meeting taking place. They have not addressed the authenticity of the emails.