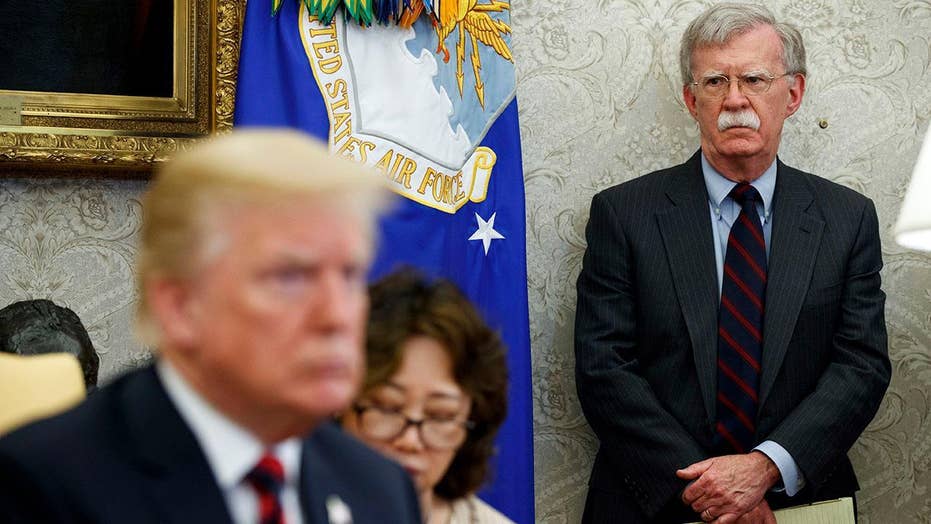 Speaking to the press in the Oval Office, the president elaborated on the reasons why Bolton left his high-profile post and said that he asked the foreign policy hawk to step down amid complaints that Bolton was not working well with others in the White House.

“He made some big mistakes,” Trump said. “John wasn’t in line with what we were doing.”

Trump added: “John came to see me the night before and I told him, ‘You aren’t getting along with a lot of people and a lot of people don’t like your tactics and your ideas and I would like you to resign.’”

Trump’s comments contradict Bolton’s tweeted version of events, in which the former U.S. ambassador to the United Nations said he offered to resign but the president would not immediately accept it.

Bolton told Fox News on Tuesday that he and the president were discussing Afghanistan on Monday evening, when he offered to resign.

"I offered to resign last night," he told Fox News in a text message. "There was no request for a resignation."

The letter, obtained by Fox News, was dated Sept. 10, 2019, and stated: "Dear Mr, President: I hereby resign, effective immediately, as Assistant to the President for National Security Affairs. Thank you for having afforded me this opportunity to serve our country."

Bolton, who previously served as a Fox News contributor, worked in the administrations of former Presidents Ronald Reagan, George H.W. Bush and George W. Bush and served as Bush's lawyer during the 2000 Florida recount. Bolton also served as a U.S. permanent representative to the United Nations from 2005 to 2006, and as an undersecretary of state for arms control and international security from 2001 to 2005.

Bolton became Trump’s third national security adviser in April 2018, replacing H.R. McMaster, who had been appointed earlier in the administration to replace Michael Flynn. He is well known for his hawkish stance on foreign policy and as an advocate for U.S. intervention abroad and regime change in nations led by Washington’s adversaries.

Tensions between Bolton and White House staffers flared in recent months over influence in the president's orbit and how to manage his desire to negotiate with some of the world's most unsavory actors. Since joining the administration in the spring of last year, Bolton has espoused skepticism about the president's whirlwind rapprochement with North Korea and recently has become a vocal internal critic of potential talks between Trump and leaders of Iran and Afghanistan's Taliban.

“We were set back very badly when John Bolton talked about the ‘Libyan model,” Trump said of Bolton’s push to deal with North Korea in the same way the U.S. dealt with Libya under former strongman Muammar Qaddafi.

The Libyan leader forfeited major weapons and allowed inspectors into his country, only to complain the West didn’t give him much in return. He was eventually ousted and killed during the Arab Spring uprisings that were supported by Europe and the U.S.

Bolton also broke with Trump with his vocal condemnation of Russia's global aggressions, and last year he masterminded a quiet campaign inside the administration and with allies abroad to persuade Trump to keep U.S. forces in Syria to counter the remnants of the Islamic State and Iranian influence in the region. Bolton's maneuvering at the time contrasted with former Defense Secretary Jim Mattis' decision to instead resign over Trump's December withdrawal announcement, which has been effectively reversed.