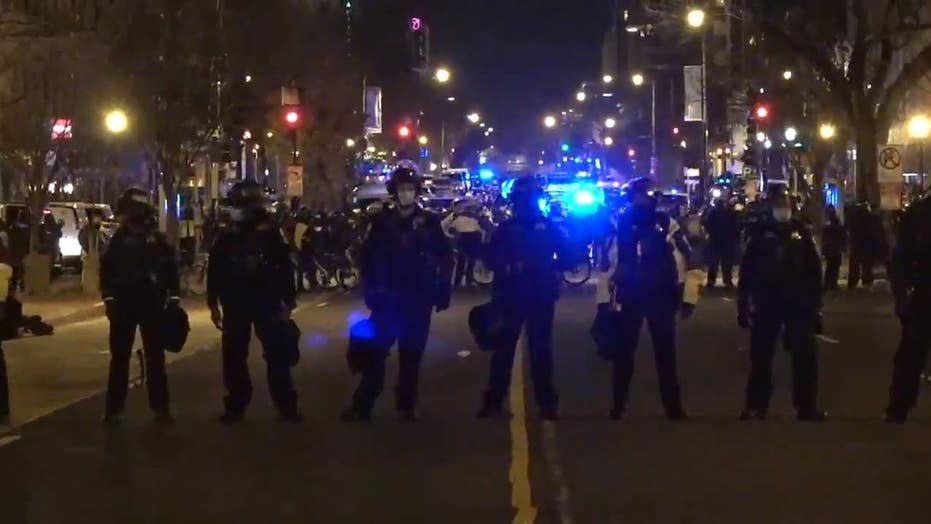 Marine One flies over crowd of Trump supporters

President’s helicopter makes an appearance above the rally of his supporters in Washington, D.C.; reaction from My Pillow CEO Mike Lindell.

Chaos erupted in Washington, D.C., on Saturday night, hours after two pro-Trump rallies ended. Groups of Proud Boys and Antifa activists clashed under cover of darkness, with police repeatedly forcing them apart amid reports of brawls and stabbings.

At least four stabbings occurred near a bar that served as a gathering spot for the Proud Boys, according to the Washington Post. The victims were hospitalized, possibly with life-threatening injuries, a D.C. Fire Department spokesman told the newspaper.

It wasn't immediately clear which groups the attackers and victims were affiliated with, the report said.

As of 9 p.m. ET, 23 people had been arrested, including 10 charged with misdemeanor assault, six with assaulting a police officer and four will rioting, FOX 5 of Washington reported. One suspect was carrying an illegal stun gun.

“Moments after I took this video, fireworks exploded at the front entrance of the Hyatt Hotel,” Washington Post reporter Marissa Lang tweeted. “Proud Boys and anti-fascist [Antifa] protesters had been starting to brawl at the entrance."

She also said police pepper-sprayed a group of protesters a few blocks away and later reported that at least two people had been stabbed, citing fire officials.

Several unverified videos on Twitter posted during the protests from the area appeared to show people bleeding being treated by police.

With the U.S. Capitol building in the background, supporters of President Donald Trump stand Pennsylvania Avenue during a rally at Freedom Plaza, Saturday, Dec. 12, 2020, in Washington. (Associated Press)

An online post by Washington's WJLA-TV included video of one police officer being helped away by colleagues after being injured.

Police separated the groups, shut down traffic in parts of downtown D.C. and sealed off Black Lives Matter Plaza near the White House.

At one point, a group of Proud Boys allegedly ducked through an alleyway to sidestep police and confront Antifa, according to the Post Millennial's Matthew Miller.

Subsequent videos captured, the sounds of stun guns going off, fireworks and demonstrators coughing after reportedly inhaling pepper spray. Despite aggressive and graphic language between both groups of protesters and counterprotesters, police appeared to quickly intervene and keep them apart in numerous videos.

Earlier Saturday, President Trump's backers descended on Washington to support the president, who has come up short in his efforts to overturn the results of the 2020 presidential election.

Wiith Trump flags and hats, and a few face masks, they gathered at Freedom Plaza near the White House chanting "Four More Years" and "Stop the Steal."

Around midday, Trump flew over the crowd as Marine One carried him from the White House for his trip to the Army-Navy football game at West Point, N.Y., according to The Associated Press.

"Wow!" the president tweeted before leaving the White House. "Thousands of people forming in Washington (D.C.) for Stop the Steal. Didn't know about this, but I'll be seeing them! #MAGA."

Trump aide Dan Scavino tweeted an aerial picture with a message to the crowd. "Thank you, Patriots."

During the last major "Stop the Steal" rally in D.C. on Nov. 14, Trump and his motorcade drove through the downtown D.C. crowd to wave to supporters before heading to his golf resort in Virginia.

Organizers of the Women for America First rally were expecting 15,000 participants for the rally and march to the Supreme Court.

Supporters greeet President Donald Trump as he walks on the South Lawn of the White House in Washington, Saturday, Dec. 12, 2020, before boarding Marine One. (Associated Press)

One speaker at the rally, retired Gen. Michael Flynn -- who was Trump's former national security adviser -- told the crowd he was confident Trump would remain in office.

Trump last month granted a pardon to Flynn, who pleaded guilty in 2017 to lying to the FBI about his contact with a Russian ambassador, but later claimed innocence.

"The fraud that is being perpetrated on the United States of America through this previous election is outrageous," Flynn told the crowd. "It's outrageous. We will not accept it."

Other speakers at the Women for America First demonstration included "My Pillow" guy Mike Lindell and former Trump aides Sebastian Gorka, Boris Epshteyn and Katrina Pearson, who encouraged supporters to keep up the fight to overturn the election results.

People gather on Pennsylvania Avenue for the "Stop the Steal" rally in support of U.S. President Donald Trump, in Washington, U.S., December 12, 2020. (Reuters)

The presidential inauguration is Jan. 20.

Trump supporters made clear they will continue to fight back regardless of the media and court rulings, and will not accept Biden as president.

"In 2016, they had this thing called the resistance, do you remember that?" Pearson said of the left's movement against Trump. "You haven't seen a resistance until patriots show up to defend the republic."

The second pro-Trump rally was at the Sylvan Theater on the National Mall, where organizers planned for 500 people, according to their national park permit.

Meanwhile, the "Refuse Fascism" anti-Trump group scheduled a counter-protest in Black Lives Matter Plaza at noon, with the message: "Trump: You Lost. Get the Hell Out!"

The rallies come a day after a major legal defeat for Trump, when the Supreme Court Friday declined to hear a Texas case that challenged the election results in Pennsylvania, Michigan, Georgia and Wisconsin.

Trump has repeatedly alleged he beat President-elect Joe Biden, and claims there was widespread voter fraud. But states have stood by their results and courts have repeatedly rejected Trump's legal claims that Biden's victory -- by a margin of more than 7 million votes nationwide -- should be tossed out.

Supporters of US President Donald Trump demonstrate in Washington, DC, on Dec. 12, 2020, to protest the 2020 election. (Getty Images)

On Jan. 6 there will be a joint session of the House and Senate to count the electoral votes and certify Biden as the winner.

"The Supreme Court has decisively and speedily rejected the latest of Donald Trump and his allies’ attacks on the democratic process," Biden transition official Michael Gwin said in a statement. "This is no surprise — dozens of judges, election officials from both parties, and Trump's own Attorney General have dismissed his baseless attempts to deny that he lost the election. President-elect Biden's clear and commanding victory will be ratified by the Electoral College on Monday, and he will be sworn in on January 20th."