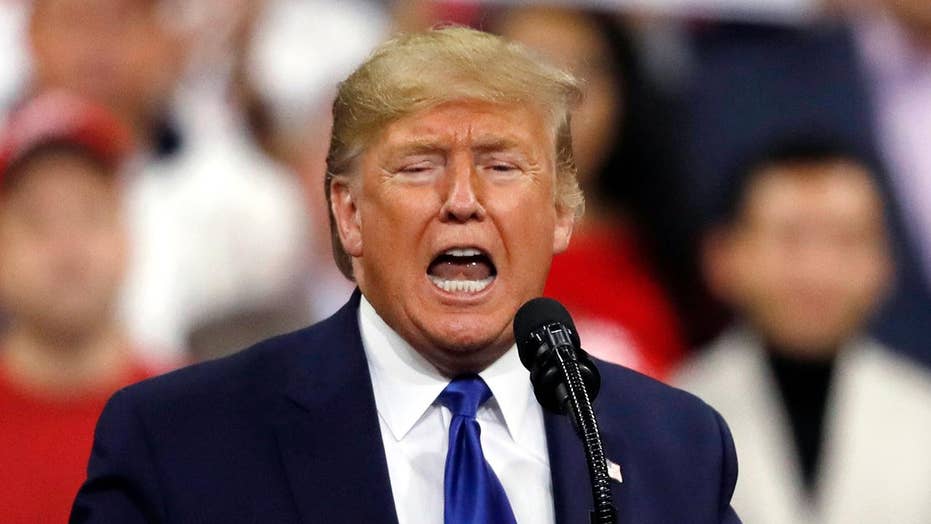 Trump fires up his base with a Keep America Great rally in the battleground state of Wisconsin; Kristin Fisher reports from Milwaukee.

President Trump caught some flak in Michigan last month after suggesting that a longtime lawmaker from the state who had recently died might be "looking up" at the gathering from hell.

On Tuesday in Wisconsin, Trump made a similar remark, this time about President Lyndon B. Johnson.

Trump made the comment while defending his July phone call with Ukrainian President Volodymyr Zelensky, which sparked his impeachment by the House of Representatives after he allegedlly asked Zelensky to investigate former Vice President Joe Biden and his son Hunter’s involvement in the country.

“This is based on a perfect phone call. Did anybody read the transcript? It’s a perfect call,” he told his supporters. “In fact, if you go back and look at Lyndon Johnson, all of ‘em, you know, Lyndon Johnson was sort of a tough guy. Can you imagine his phone calls? He's probably looking down -- or looking up -- and he's probably saying these people have gone crazy.”

“Trump is hoping to meet LBJ I guess," Conway wrote.

Rep. Raja Krishnamoorthi, D-Ill., tweeted, “We can listen to recordings of many of LBJ's calls and, hard as many of them can be to listen to now for many reasons, he didn't ask foreign governments to intervene in our elections in exchange for congressionally authorized military aid."

Last month in Michigan, Trump told supporters that former Rep. John Dingell, who represented Michigan for 60 years until his death last February, might be “looking up" at them.

Dingell’s widow, Rep. Debbie Dingell, tweeted at the time Trump’s comment made her “healing much harder.”