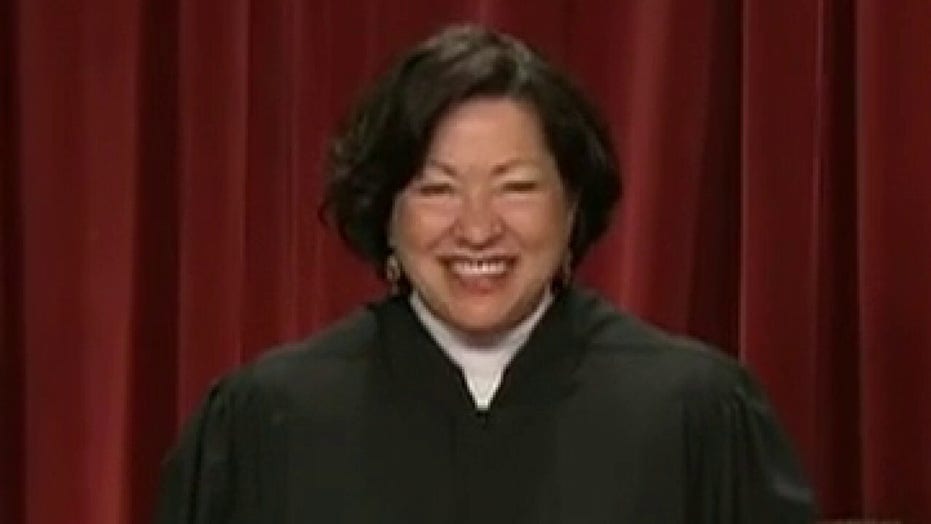 In a remarkable public rebuke, President Trump late Monday called on Supreme Court justices Sonia Sotomayor and Ruth Bader Ginsburg to recuse themselves from any cases involving his administration over their past comments.

Trump has proven in the past that he is not bashful about criticizing justices, but he seemed to be particularly bothered by a recent dissent by Sotomayor hinting that conservative-leaning justices have a bias towards Trump.

The president's tweet cited Laura Ingraham's Fox News show, "The Ingraham Angle," and he accused Sotomayor of attempting to shame other justices to vote with her.

Sotomayor, who was nominated by President Obama in 2009, issued the blistering dissent Friday after a ruling in the case of Wolf v. Cook County.

The case dealt with the Trump administration's expansion of situations where the government can deny visas to non-citizens looking to enter the U.S.

Federal law already says that officials can take into account whether an applicant is likely to become a "public charge," which government guidance has said refers to someone "primarily dependent on the government for subsistence.

Sotomayor wrote in her dissent, "It is hard to say what is more troubling: that the Government would seek this extraordinary relief seemingly as a matter of course, or that the Court would grant it."

Vox pointed out what appeared to be the crux of Sotomayor's argument: the Trump administration has a practice of using a favorable Supreme Court to bypass lower courts still considering cases. The report pointed to a paper written by Stephen Vladeck, a University of Texas law professor. Vladeck wrote that Trump's solicitor general has filed at least 21 stay applications in the Supreme Court and compared that number to the combined eight times the applications were used during the George W. Bush and Obama administrations.

"Claiming one emergency after another, the Government has recently sought stays in an unprecedented number of cases, demanding immediate attention and consuming limited Court resources in each," Sotomayor wrote in the dissent. "And with each successive application, of course, its cries of urgency ring increasingly hollow. Indeed, its behavior relating to the public-charge rule in particular shows how much its own definition of irreparable harm has shifted.”

Trump supporters say the administration has good reason to take its cases to the Supreme Court.

Carrie Severino, the president of the Judicial Crisis Network, told Ingraham that Sotomayor's concern is misplaced. She said lower-court judges are repeatedly issuing nationwide injunctions at a quantity never before seen -- that is, ruling that their decision affects the entire country rather than the jurisdiction wherein it was brought.

Trump, once again, brought up the time Ginsburg called him a "faker" during the 2016 presidential campaign. She told CNN at the time that Trump has "no consistency about him. He says whatever comes to his head at the moment."

She apologized shortly thereafter, but Trump brought the slight up during a later interview, while Ginsburg was recovering from a health issue two years later.

"I wish her well. She said something very inappropriate during the campaign, but she apologized for it," he said.