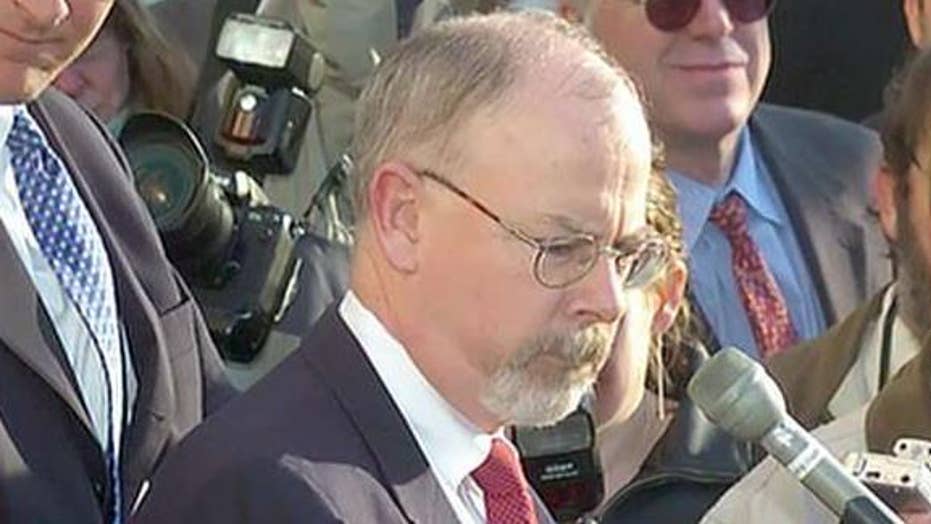 Texas Republican Rep. John Ratcliffe says the Justice Department was used by the Obama administration to go after their enemies.

President Trump said Friday it’s time to “investigate the investigators,” after it was revealed that U.S. Attorney John Durham’s review of alleged misconduct at the Justice Department in the run-up to the 2016 election has turned into a full-fledged criminal probe.

The escalation of Durham's investigation prompted immediate accusations from Democrats that the Bill Barr-led DOJ has become compromised, at a time when Trump faces an impeachment inquiry over his interactions with Ukraine. But Trump, before leaving the White House for a South Carolina event on criminal justice reform, maintained that he has done “nothing wrong” in the Ukraine controversy -- and stressed the importance of the Durham probe instead.

“Investigate the investigators,” he said. “Whether it’s [former FBI officials Peter] Strzok and [Lisa] Page, whether it’s [James] Clapper or [James] Comey, and all of these people because terrible things went on for our country.”

He went on to tout Attorney General Barr as a “prestigious” and “honorable” man.

Trump went on to blast the original Russia investigation as “the worst hoax in the history of our country.”

Fox News reported on Thursday that the Durham probe has turned into a criminal investigation. One source told Fox News that Justice Department Inspector General Michael Horowitz’s forthcoming report, which will focus on alleged abuses of the Foreign Intelligence Surveillance Act (FISA), will shed light on why Durham’s investigation has become a criminal inquiry.

Horowitz also announced Thursday that his report would be available to the public soon, and would have few redactions.

The elevation in status for Durham’s investigation is significant. The status means that the U.S. attorney from Connecticut will be able to subpoena witnesses, file charges and launch grand juries.

Fox News has also learned that Durham is “very interested” in questioning former CIA Director John Brennan and former Director of National Intelligence James Clapper. According to a source familiar with the situation, Brennan has received word from his attorney that he may be contacted by Durham’s office, but Clapper has received no such communication at this time.

Trump and his allies have long claimed that investigators involved in the start of the Russia collusion probe were politically motivated and mishandled everything from surveillance warrants to interviews. Just this week, former national security adviser Michael Flynn's lawyer said her client's FBI interview memo was manipulated -- as he still awaits sentencing for a guilty plea of lying to investigators about contacts with Russia.

But Democrats fumed Friday over the reports on the Durham probe, accusing Barr of essentially leading a political investigation.

“If the Department of Justice may be used as a tool of political retribution or to help the President with a political narrative for the next election, the rule of law will suffer new and irreparable damage,” they continued.

But House Judiciary Committee ranking member Doug Collins, R-Ga., blasted Nadler, saying that the “empty accusations” against Trump in the Russia investigation left Americans with “unanswered questions” about the FBI.

“Chairman Nadler is wrong to suggest that John Durham’s investigation is anything less than an effort to deliver truth and accountability,” he said in a statement. “If Mr. Durham finds that crimes were committed, I have confidence that he will pursue justice and help restore America’s confidence in its premier law enforcement agency.”

On the other side of the Capitol, Senate Intelligence Committee ranking member Mark Warner, D-Va., said Barr should testify.

“Senate Intel is wrapping up a three-year bipartisan investigation, and we’ve found nothing remotely justifying this,” Warner tweeted. “Mr. Barr’s ‘investigation’ has already jeopardized key international intelligence partnerships. He needs to come before Congress and explain himself.”

As part of the probe, Barr and Durham have traveled to Italy and also had conversations with law enforcement officials in the U.K. and Australia about their investigation, according to multiple sources familiar with the meetings.

The team “is gathering information from numerous sources, including a number of foreign countries. At Attorney General Barr’s request, the president has contacted other countries to ask them to introduce the attorney general and Mr. Durham to appropriate officials,” Justice Department spokeswoman Kerri Kupec said last month.

The developments coincide with the formal impeachment inquiry into the president, which began after details emerged from his highly controversial July 25 phone call with Ukrainian President Volodymyr Zelensky, in which he pressured him to launch an investigation into former Vice President Joe Biden and his son Hunter Biden—specifically Hunter’s role on the board of a Ukrainian natural gas firm and the elder Biden's role in the ouster of a prosecutor looking into the firm's founder.

A whistleblower first complained about the contents of the phone call to the intelligence community inspector general in August, stating the call seemed to show the president soliciting a foreign power to help in influencing the 2020 presidential election by opening an investigation into his political opponent. This has since led to a parade of witnesses testifying behind closed doors about the president's effort to pressure Ukraine, including allegations that he held back military aid as leverage.

The White House and the president’s allies have maintained there was no such quid pro quo, though a top diplomat this week provided testimony to the contrary.

The chairs on Friday also notified State Department Counselor T. Ulrich Brechbuhl of a subpoena compelling his testimony next month.

“Your failure or refusal to appear at the deposition, including at the direction or behest of the President or the White House, shall constitute evidence of obstruction of the House’s impeachment inquiry and may be used as an adverse inference against the President,” the Democratic lawmakers wrote in their letter to Brechbuhl.

Fox News' Ed Henry and Gregg Re contributed to this report.