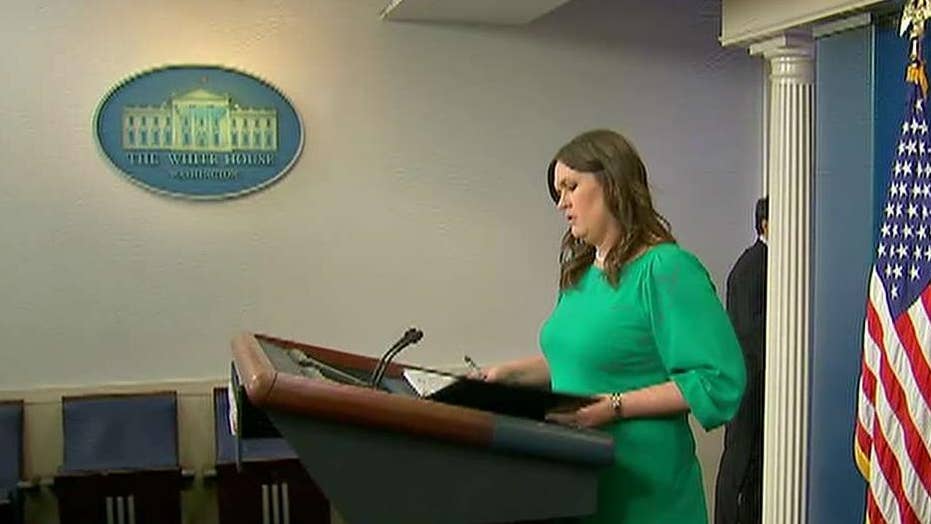 White House deputy press secretary Hogan Gidley says Sarah Sanders will 'absolutely' return to the podium to talk to the press and deliver messages to the American people.

President Trump on Tuesday said he told Sarah Sanders “not to bother” giving press briefings, citing inaccurate coverage, as the White House press secretary continues her longest stretch away from the podium.

“The reason Sarah Sanders does not go to the ‘podium’ much anymore is that the press covers her so rudely & inaccurately, in particular certain members of the press. I told her not to bother, the word gets out anyway! Most will never cover us fairly & hence, the term, Fake News!” Trump tweeted.

The president’s tweet comes as the White House has been criticized for not holding regular press briefings. The last press briefing was Dec. 18—35 days ago, which marks Sanders’ longest stretch away from the podium. ABC News reported that the previous record was 29 days.

This stretch comes amid an intense partial government shutdown, with no end in sight. The government ran out of funding on Dec. 22, over a border security funding debate between the White House and congressional Democrats, and has left more than 800,000 federal workers and contractors without pay. Tuesday marks the 32nd day of the partial shutdown.

Olivier Knox, the president of the White House Correspondents Association, said in a Tuesday statement that the “retreat from transparency and accountability sets a terrible precedent.”

“Being able to question the press secretary or other senior government officials publicly helps the news media tell Americans what their most powerful representatives are doing in their name,” Knox said. “While other avenues exist to obtain information, the robust, public back-and-forth we’ve come to expect in the James A. Brady briefing room helps highlight that no one in a healthy republic is above being questioned.”

“She will come back when she finds a reason to do that, because so often, so funny, because the media often tell us when Sarah Sanders stands…at this podium, ‘why can’t we hear from the president? we need to hear more from the president,’” Gidley said on “America’s Newsroom.”

“Sarah Sanders will absolutely be back to the podium…delivering the message to the American people,” he said.

Gidley added that “ a lot of times we don’t come to the podium” because “the president addressed the American people” in other ways, citing his impromptu press briefings on the White House lawn on the way to Marine One, or on Twitter.

“It doesn’t necessarily mean Sarah Sanders needs to be at the podium when the president is talking to the American people,” Gidley said.

The president and his administration have criticized the media as “fake news,” amid a barrage of tough coverage over the partial shutdown and more.

The president has consistently blasted the media, calling it the “real Opposition Party,” and has accused journalists and major mainstream news organizations of being “dishonest,” even as he gives interviews to some of those same publications.

In August, more than 300 publications across the country participated in an effort, initially organized by The Boston Globe, publishing editorials promoting freedom of the press. The Globe’s piece was titled “JOURNALISTS ARE NOT THE ENEMY,” and said that replacing “a free media with a state-run media” is the “first order of business for any corrupt regime taking over a country.”