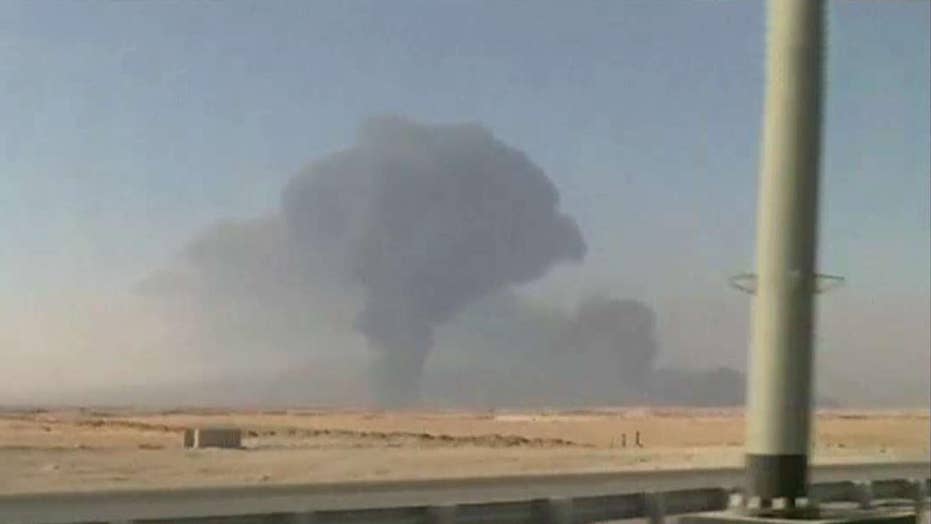 President Trump on Sunday suggested U.S. investigators had "reason to believe" they knew who launched crippling attacks against a key Saudi oil facility, and vowed that America was "locked and loaded depending on verification."

While he did not specify who he believed was responsible for Saturday's drone attacks, U.S. investigators previously have pointed the finger at Iran.

"Saudi Arabia oil supply was attacked. There is reason to believe that we know the culprit, are locked and loaded depending on verification, but are waiting to hear from the Kingdom as to who they believe was the cause of this attack, and under what terms we would proceed!" the president tweeted.

Earlier Sunday, Trump authorized the use of emergency oil reserves in Texas and other states after Saudi oil processing facilities were attacked, sparking fears of a spike in oil prices when markets reopen Monday.

The president wrote that he had authorized the release of oil from the Strategic Petroleum Reserve, "in a to-be-determined amount sufficient to keep the markets well-supplied."

He continued, "I have also informed all appropriate agencies to expedite approvals of the oil pipelines currently in the permitting process in Texas and various other States."

The Saudi oil sites attacked on Saturday interrupted about 5.7 million barrels of crude oil production, over 5 percent of the world’s daily supply.

Yemen’s Iran-backed Houthi rebels have claimed responsibility for the drone assault, but the U.S. has accused Iran of launching the assault. Tehran has denied any involvement, calling the accusations "maximum lies."

The Strategic Petroleum Reserve, located in Texas and Louisiana, is the largest government-owned stockpile of emergency crude oil in the world, according to the Department of Energy, which manages the supply.

The emergency reserve was created in the mid-1970s amid rising gasoline prices sparked by the Arab oil embargo. Per U.S. law, presidents may authorize the use of the reserves if a major disruption threatens the economy.

The federally owned petroleum reserve of hundreds of millions of barrels of crude oil has been tapped only three times, most recently in 2011 amid unrest in Libya.

"This president and his national security team, Secretary (of State Mike) Pompeo – our nation’s chief diplomat – keep many options on the table, particularly when it comes to retaliating against malign behavior, and protecting American interests and Americans and our American economy," said Kellyanne Conway, counselor to President Trump, on "Fox News Sunday."

The attack, meanwhile, as further escalated tensions in the Middle East, where hostilities between Iran and the U.S. have been at an all-time high over the former's nuclear ambitions. President Trump has withdrawn the U.S. from an Obama-era nuclear deal that sought to lift sanctions in exchange for curbs on Iran's nuclear ambitions.

President Trump on Sunday also derided "Fake News" for reporting that he was willing to meet with Iran under "No Conditions." While Secretary of State Mike Pompeo and Treasury Secretary Steve Mnuchin recently said Trump and Rouhani could meet without preconditions, Trump himself said last Monday only that a meeting "could happen. It could happen. No problem with me."

Saturday’s attack made no immediate impact on global oil prices since as markets were closed for the weekend, yet some analysts have cautioned that oil prices could spike when markets reopen on Monday.