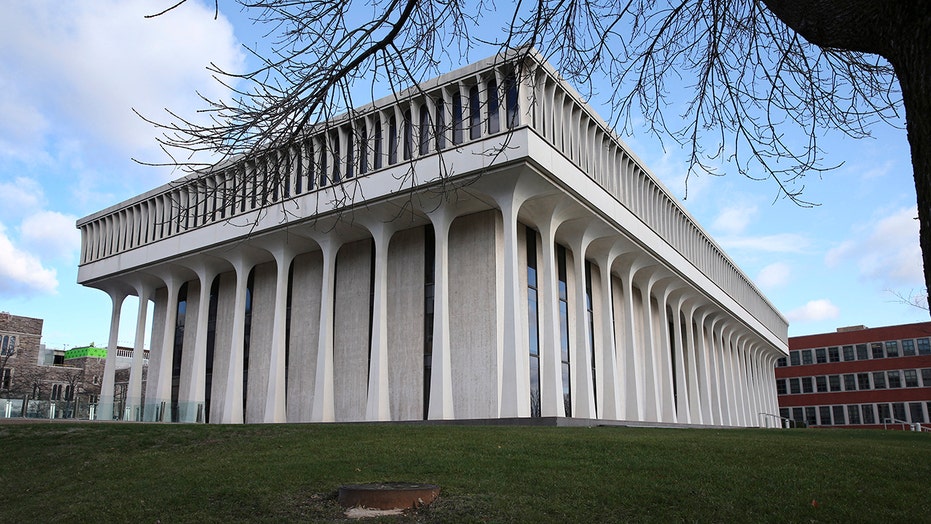 President Trump on Monday mocked recent efforts to remove the names of John Wayne from a California airport and President Woodrow Wilson from a Princeton University school over concerns of racist sentiments.

California Democrats in Orange County recently passed a resolution calling for Wayne's name to be scrubbed from their local airport due to “racist and bigoted statements," while Princeton has already taken Wilson's name off of their public policy school and a residential college over "racist views and policies."

"Can anyone believe that Princeton just dropped the name of Woodrow Wilson from their highly respected policy center," Trump tweeted. "Now the Do Nothing Democrats want to take off the name John Wayne from an airport. Incredible stupidity!"

Princeton trustees voted Friday to change the name of the public policy school, which will now be known as The Princeton School of Public and International Affairs, while the college will simply be called First College.

"The trustees conclude that Woodrow Wilson's racist thinking and policies make him an inappropriate namesake for a school or college whose scholars, students, and alumni must firmly stand against racism in all its forms,” said a statement published on the school's website.

The trustees cited Wilson’s “segregationist policies,” by which he segregated multiple federal agencies and his Cabinet after decades of integration following Reconstruction. The New York Times noted that while Wilson may not have led the segregationist efforts, he “doubled down” when challenged on the topic and rationalized segregation as a “strategy to keep racial peace.”

Protests over the New Jersey Ivy League school's name have been ongoing since 2015 when students occupied the president’s office and demanded Wilson’s name be removed from Princeton buildings. The university responded by forming a committee to study Wilson’s legacy at the school.

The John Wayne resolution, first reported by the Los Angeles Times, called on the Orange County Board of Supervisors to reverse the 1979 decision to rename it after the actor, and cited remarks he made in a 1971 interview with Playboy.

“I believe in white supremacy until the blacks are educated to a point of responsibility. I don’t believe in giving authority and positions of leadership and judgment to irresponsible people,” he said in that interview.

“I don’t feel guilty about the fact that five or 10 generations ago these people were slaves,” he said at another point in the interview.

The latest push comes amid a movement across the country to tear down monuments and rename buildings and institutions that are named after Confederate generals and other controversial figures.