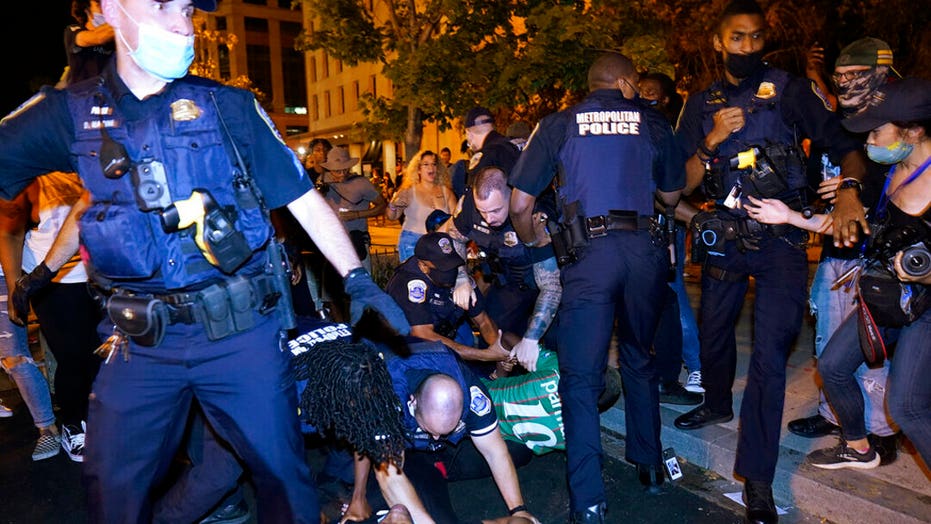 President Trump slams D.C. Democrat mayor Muriel Bowser for chaos on the streets after the RNC

President Trump jumped right into his rally Friday by blaming Democrats, first for harassment aimed at attendees of his White House nomination acceptance speech the night before, then at opponent Joe Biden.

"The mayor should be ashamed for that kind of display of incompetence," Trump told supporters at the New Hampshire event. "It's happening all over when you have Democrat-run cities."

On Friday, viral video circulated showing Sen. Rand Paul, R-Ky., being yelled at by demonstrators as he left the White House event. Four officers surrounded him on his walk to his hotel, some using their bicycles as a barrier between Paul and the protesters.

Trump added that he told Paul he would invite the four officers who protected him to the White House for a medal. Protests fired up again in the district, as well as in other cities, following the shooting of Jacob Blake by police officer Rusten Sheskey in Kenosha, Wis., Sunday. Blake, who is Black, was shot in the back and is recovering, though his family said he is paralyzed.

Referring to D.C., Trump said Friday that his administration was not "supposed" to go in to help keep the peace unless a city declares insurrection, he said.

He pivoted to his opponent, claiming Democratic presidiential nominee Joe Biden is a “puppet” to the radical left who “doesn’t even know he’s alive.” "I believe I have the honor of running against the worst candidate ever put up by the Democratic Party," Trump said.

He blamed Democrats for the nationwide protests for social justice that have at times turned to chaos, part of life in many cities for months. “Today’s Democratic Party is filled with hate. Just look at Biden supporters screaming at people at the street with unhinged, manic rage."

“They are not protesters. Those are anarchists, agitators, rioters, looters,” Trump said. “It has nothing to do with George Floyd. They have no idea who he is. If you ask them ‘Who’s George Floyd?’ they say ‘I don’t know.’”

Floyd, 46, was killed during an arrest by Minneapolis police in which an officer kept his knee on Floyd's back for almost eight minutes. His death helped spark a nationwide uprising against police brutality and racial injustice that is ongoing.

He told supporters who had private insurance they would lose their private health care under Biden. Biden was against "oil, guns and God," said Trump.

Biden's healthcare plan includes giving Americans a pubilc option, similar to Medicare, but it would not kick those with private insurance off of their current plans.

Trump also touted his work on "Right to Try," saying it would allow those with potentially terminal diseases to try experimental treatments and bypass the U.S. Food and Drug Administration.

A supporter in the crowd shouted that his wife was terminally ill and wanted to experiment under "Right to Try." "I've seen you at a lot of rallies," Trump said. "We'll talk after this."

The president highlighted funding for historically black colleges and universities, nodding to Martin Luther King Jr.'s dream of not judging others by skin color. "The radical left's effort to divide everyone by race tears us apart. There is so much racial hatred."

Both Biden and Harris have accused the president of stirring up racial hatred.

Trump also bashed vice presidential candidate Kamala Harris, calling her "a beauty," before asking why she would make a good potential president - claiming she dropped out in November after her polling numbers dropped.

"They want Ivanka," Trump said, proposing his daughter for president as the crowd cheered.

Supporters of President Trump wait in line ahead of Friday evening's event at a hangar adjacent to Manchester-Boston Regional Airport, on August 28, 2020

Trump told the crowd that New Hampshire owed him their votes. “You better vote for me or you’re going to have the greatest depression you’ve ever seen,” he said after claiming the next president will get to appoint up to 5 Supreme Court judges.

"We are one movement, one people and one nation under god and we don’t take the beautiful word God out of our Pledge of Allegiance.”

Trump started the rally Friday night by drawing attention to the fact that he slipped on the way up to the podium. "They put in a floor that's like an ice skating rink," Trump said, alluding to the difficult time he had walking down a ramp at a West Point graduation ceremony in June.

Supporters in New Hampshire waited hours in line for President Trump to take the stage for a 6 p.m. rally Friday night.

New Hampshire was supposed to host President Trump at a rally in July, after his Tulsa appearance, but the event was abruptly canceled one day before the planned July 11 date. It was scrapped because of COVID-19.

Attendees wore masks at the New Hampshire rally Friday, and had their temperatures checked upon entering, unlike the previous night, where masks were few and far between on the South Lawn.

Besides holding the first-in-the-nation presidential primary, New Hampshire for a generation has been a battleground state in the general election. Trump narrowly lost the state’s four electoral votes four years ago by fewer than 3,000 votes to then-Democratic nominee Hillary Clinton. New Hampshire is one of a handful of states Clinton narrowly captured that the Trump campaign now hopes to flip from blue to red.

Supporters of President Trump wait in line for a temperature check before as they arrive for the president's speech in Manchester, New Hampshire, on Aug. 28.

Trump campaign New Hampshire co-chair Fred Doucette told Fox News having the president in the state is a big boost.

“I think it’s a very big statement for him to show up here first after his acceptance speech,” the state representative from Salem emphasized. “It’s a loud statement that New Hampshire is that important.”