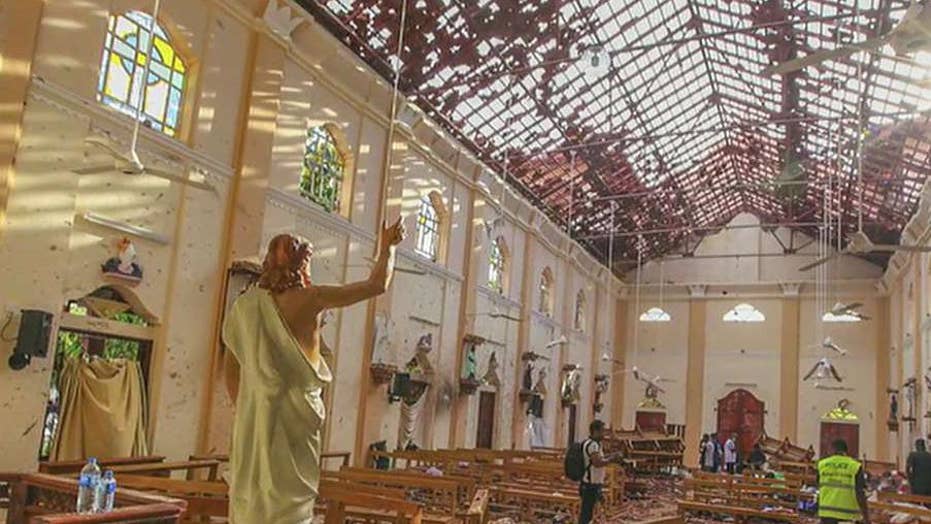 A wave of explosions rocked churches and hotels in and around the Sri Lankan capital of Colombo; Trey Yingst reports.

The deadly Sri Lankan bomb attacks on Easter Sunday were met with an outpouring of grief and condolences from lawmakers on both sides of the aisle in the United States.

From President Trump to congressional leaders to the 2020 Democratic presidential candidates, the attacks that claimed more than 200 people and injured hundreds of others were immediately condemned across the political spectrum in the U.S.

House Speaker Nancy Pelosi, D-Calif., called the bombings “heartbreaking” for a country that suffered from years of bloody civil war.

“Today’s heartbreaking attacks in Sri Lanka come as the country has worked hard to build a common future after years of war,” Pelosi tweeted. “Our thoughts are with the injured & the families of those killed in today’s Easter Sunday attacks.”

A series of eight bomb blasts rocked churches and luxury hotels in or near Sri Lanka's capital on Easter Sunday — the deadliest violence the South Asian island country has seen since a bloody civil war ended a decade ago. Police spokesman Ruwan Gunasekara said at least 207 people were killed and 450 wounded.

Defense Minister Ruwan Wijewardena described the bombings as a terrorist attack by religious extremists and said seven suspects had been arrested, though there was no immediate claim of responsibility. He said most of the blasts were believed to have been suicide attacks.

The explosions at three churches and three hotels collapsed ceilings and blew out windows, killing worshippers and guests. People were seen carrying the wounded out of blood-spattered pews. Witnesses described powerful explosions, followed by scenes of smoke, blood, broken glass, alarms going off and victims screaming.

“As countless people attend Easter service today, our prayers are with the people of Sri Lanka who lost loved ones in these horrible attacks,” Rep. Ilhan Omar, D-Minn., tweeted. “No person, of any faith, should be fearful in their house of worship.”

The three hotels and one of the churches, St. Anthony's Shrine, are frequented by foreign tourists. Sri Lanka's Foreign Ministry said the bodies of at least 27 foreigners were recovered and included people from Britain, the U.S., India, Portugal, and Turkey. U.S. Secretary of State Mike Pompeo says 'several' Americans were killed in the attacks, while China's Communist Party newspaper said two Chinese were killed.

"These attacks demonstrate the brutal nature of terrorists whose sole aim is to threaten peace & security," Pompeo said in a tweet.

Prime Minister Ranil Wickremesinghe said he feared the massacre could trigger instability in Sri Lanka, a country of about 21 million people, and vowed to "vest all necessary powers with the defense forces" to take action against those responsible. The government imposed a nationwide curfew from 6 p.m. to 6 a.m.

“My prayers are with the people of Sri Lanka this Easter morning,” Sen. Tim Scott, R-S.C., tweeted. “Heartbreaking sadness on a day that so many celebrate.”

The scale of the bloodshed recalled the worst days of Sri Lanka's 26-year civil war, in which the Tamil Tigers, a rebel group from the ethnic Tamil minority, sought independence from the Buddhist-majority country. During the war, the Tigers and other rebels carried out a multitude of bombings. The Tamils are Hindu, Muslim and Christian.

There is also no history of violent Muslim militants in Sri Lanka. However, tensions have been running high more recently between hard-line Buddhist monks and Muslims.

“Easter is a reminder that there is hope and rebirth even in the darkest of times. We must remember that today, more than ever,” Sen. Kamala Harris, D-Calif., who is running for president in 2020, tweeted. “I am horrified by the attacks in Sri Lanka, where so many families were celebrating such a joyous day. Praying for the victims and their loved ones.”