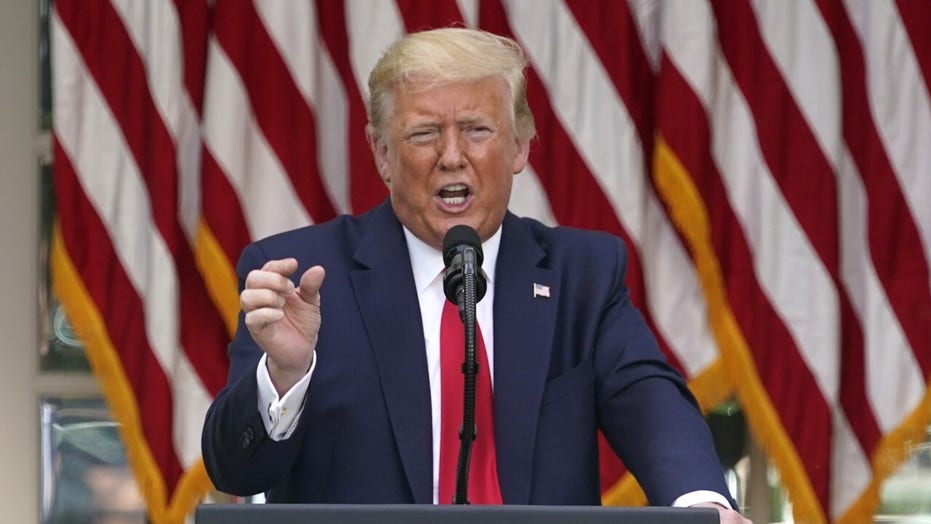 President Trump warned on Tuesday that North Carolina's governor has "a week" to figure out if the Republicans' presidential nominating convention can be held in Charlotte this summer, as other states offered to hold the gathering instead.

But Gov. Roy Cooper says he’s waiting for the Republican National Committee “to present to us in writing their proposals” on how they plan to hold their presidential convention amid the coronavirus pandemic before he can guarantee that the August convention can be held at “full attendance” as demanded by the president.

Cooper, a Democrat, spoke the day after the president threatened to move the massive quadrennial event from North Carolina if Cooper couldn’t “immediately” tell convention planners whether or not the downtown arena in Charlotte “will be allowed to be fully occupied.” And he spoke hours after the Republican governors of Georgia and Florida offered their states up as the site to host the convention if Trump follows through on his threat to move the confab.

Hours after Cooper made his comments during a daily coronavirus news conference, the president said "we don’t have much time"and that "we need a fast decision from the governor."

"I would say within a week, certainly we’d have to know. And if he can’t do it, if he feels he can’t do it, all he has to do is tell us and then we’ll pick another location, and I will tell you, a lot of locations want it," Trump added as he answered a question from Fox News' White House correspondent John Roberts.

But hours earlier Cooper explained, “We’ve been in talks with the RNC about the kind of convention that they would need to run and the kind of options that we need on the table. We’re talking about something that’s going to happen three months from now and we don’t know what our situation is going to be regarding COVID-19 in North Carolina.”

And the governor noted, “These are the same kind of conversations that we’re having with the Carolina Panthers, the Charlotte Hornets, other large arena owners. Everybody wants to get back into action soon but I think everybody knows that we have to take some steps to make sure that people are protected because this virus is still going to be with us in August and we’re going to have to take steps to protect people.”

Cooper highlighted that “we want to see from the RNC what their plans and we have asked them to submit those plans to our public health officials.”

“We asked NASCAR to do the very same thing and NASCAR did a good job this weekend in executing their plan of face coverings, of social distancing, signage, cleaning,” the governor noted.

Cooper emphasized that more discussions with the RNC will take place this week and next week. He added that while he supporter holding the August 24-27 convention in North Carolina, “we have to put the health and safety of North Carolinians as the guiding star in this process.”

The president – in a flurry of tweets early Monday -- complained that Cooper was in “Shutdown mood & unable to guarantee that by August we will be allowed... full attendance in the Arena.”

Trump demanded that convention planners “must be immediately given an answer by the Governor as to whether or not the space will be allowed to be fully occupied. If not, we will be reluctantly forced ... to find, with all of the jobs and economic development it brings, another Republican National Convention site. This is not something I want to do. Thank you, and I LOVE the people of North Carolina!”

On Tuesday morning, Republican Gov. Brian Kemp of neighboring Georgia tweeted that his state “would be honored to safely host” the RNC this summer and asked Trump to consider holding the convention in the state.

“With world-class facilities, restaurants, hotels, and workforce, Georgia would be honored to safely host the Republican National Convention,” Kemp tweeted. “We hope you will consider the Peach State, @realdonaldtrump!”

Democratic Mayor Keisha Lance Bottoms of Atlanta – Georgia’s largest city – pushed back on Kemp’s offer, saying in a CNN interview that “we just aren’t there yet. ... I don’t think that we would be prepared to do that in August.”

“I was a little surprised when I saw that offer being made,” she added.

Meanwhile, Republican Gov. Ron DeSantis told reporters that while he hasn’t spoken directly with the president, his office let the White House know that Florida’s open to hosting the convention.

“Florida would love to have the RNC,” DeSantis emphasized. “Heck, I am a Republican, it would be good for us to have the DNC [Democratic National Convention] in terms of the economic impact.”

The president’s threat to pull the convention out of North Carolina comes as the state is facing a resurgence of the coronavirus pandemic.

“This virus remains a serious threat and we can’t let our guard down,” Cooper stressed.