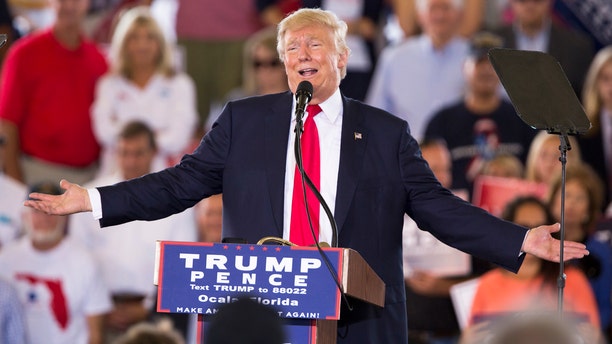 Donald Trump said Tuesday he has no interest in a "Trump TV" media venture should he lose the election, a notion that has persisted this week after a television-like alternative to the network nightly news programs began streaming on his Facebook page.

The inaugural "Live From Trump Tower," an online program hosted by Trump campaign surrogates Boris Epshteyn and Cliff Sims, directly competed Monday with the ABC, CBS and NBC national newscasts and their increasingly gloomy assessments of the Republican presidential candidate's chances of winning the upcoming election.

The program, expected to air eight more times before the election, is collaboration between the campaign and a fledgling company that has been streaming Trump's campaign rallies online for more than a year. Some see it as a precursor to a future Trump media company, although the candidate threw cold water on the idea in an interview with Cincinnati WLW radio interviewer Scott Sloan.

"I have no interest in Trump TV," Trump said. "I hear it all over the place. You know, I have a tremendous fan base. We have the most incredible people. But I just don't have any interest in that. I have one interest, that's on November 8th."

The Trump TV possibility was fueled earlier this month by a report in The Financial Times that Trump's son-in-law, Jared Kushner, had a conversation about it with a friend at an investment bank that specializes in media deals. Trump's campaign is being run now be Stephen Bannon, who was head of the conservative Breitbart News operation. For all his current poll troubles, Trump is a proven ratings magnet: two of the three most-watched presidential debates ever were between him and Democrat Hillary Clinton.

Trump and his supporters have had a complicated relationship with Fox News Channel, long the favorite network for conservative viewers. Fox faces its own uncertainties in the first post-election period without former leader Roger Ailes.

On a small scale, there already is a Trump TV: the Alabama-based Right Side Broadcasting Network that has streamed the Trump rallies and appearances on a YouTube channel since the summer of 2015.

Right Side was asked by the campaign to help produce a Facebook Live telecast from the spin room following the third presidential debate. The Trump campaign pronounced it a success, saying it generated $9 million in campaign contributions. A few days later, Right Side was asked to help with a nightly show, Joe Seales, the company's founder, told The Associated Press in an email.

"Live from Trump Tower" is set to run Monday through Thursday for 30 minutes, he said. Timing is fluid; it is expected to immediately precede or follow Trump campaign rallies, he said.

"This is our campaign, and most importantly our candidate, speaking directly to our voters," Epshteyn said during Monday's stream. "We're so excited to be bypassing the left-wing media."

During the show, they sat at a table in what they said was a campaign "war room," with flat-screen televisions, an American flag and a giant poster of Trump's face on the walls behind them. Campaign manager Kellyanne Conway and GOP strategist Sean Spicer were interviewed, and there was a commentary from Blaze TV host Tomi Lahren.

"We're going to have a hard fight," Lahren said. "They're not going to hand it to us. They don't want to drain the swamp."

Their only break was for Trump campaign commercials.

Part of the screen was filled by a steady feed of Facebook comments, many from viewers who proudly called themselves deplorables. "Nobody takes my guns," one commenter said. "Vote early, vote often," said another.

A graphic on the screen indicated how many people were watching live, and held around the 35,000 range. By Tuesday afternoon, Facebook said there were some 1.4 million clicks on the video, live and after-the-fact. That's nowhere near the roughly 24 million people who watch a network newscast each night, but respectable for online.

No one in the Trump campaign has approached Right Side about being part of any Trump TV venture in the future, said Seales, who commands a self-described ragtag band of media outsiders that believes most news organizations tilt left. He wants to give people the chance to see campaign appearances and speeches all the way through. 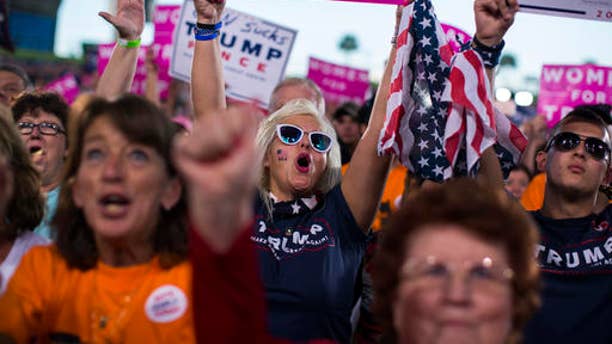 "We have no knowledge of what, if anything, Mr. Trump plans to do after the election regarding any kind of media ventures," he told the AP. "If at some point he were to ask us to be a part of anything he may do in the future, we would be foolish not to listen, as Mr. Trump is an incredibly successful businessman."

Right Side plans a program of Election Night analysis and is looking to air more shows in the future. Besides the rallies, Right Side airs programs featuring conservative personalities Pastor Mark Burns and Wayne Dupree. Seales said his eventual goal is to offer a full day of programming online.

"Our focus will turn to making this thing into a real network," he said.