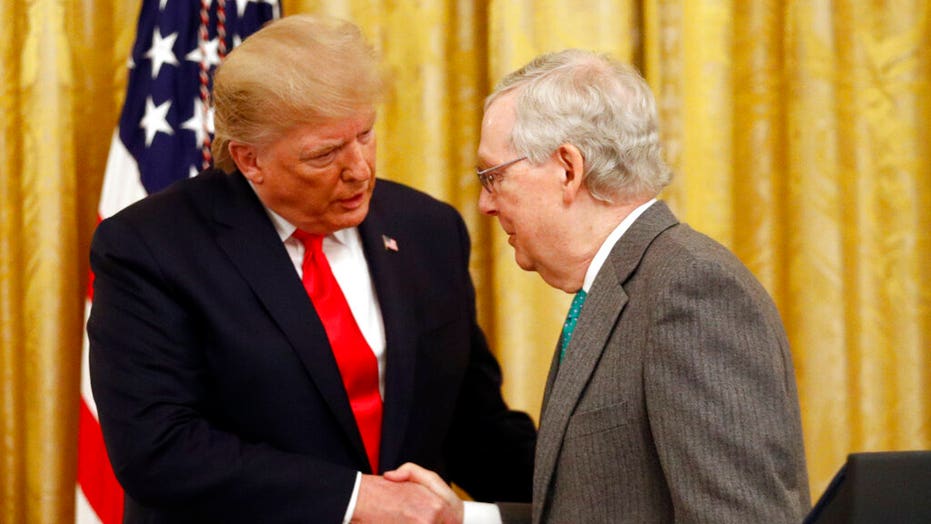 President Trump and Senate Majority Leader Mitch McConnell, R-Ky., are pushing ahead with an aggressive effort to get more federal judges confirmed amid the global coronavirus pandemic, as they grapple with the possibility that the November elections could wrest away Republican control of the Senate and White House.

Losing the White House or control of the Senate would be a major blow to efforts to install conservative jurists on the federal bench, as the president nominates judicial nominees and the Senate confirms them. McConnell -- who takes great pride in confirming Trump's judicial nominees -- has made clear he wants to fill as many vacancies as possible in 2020.

"My motto for the rest of the year is 'leave no vacancy behind,'" McConnell said at a dinner for the Federalist Society, a group for conservative and libertarian lawyers, at Union Station last November.

The majority leader and the president have had other things on their mind lately, passing in a matter of weeks three coronavirus relief packages with the most recent totaling more than $2.2 trillion worth of economic stimulus and disease-fighting measures. But they still found time on Friday to announce the nomination of Judge Justin Walker, a McConnell ally from Kentucky and former clerk for then-judge Brett Kavanaugh, to the U.S. Court of Appeals for the District of Columbia.

"I am proud that President Trump’s search took him outside the Beltway and into the Bluegrass," McConnell said in a statement on the nominee to the D.C. Circuit, which is widely viewed as a feeder bench to the Supreme Court. "He has chosen a rising Kentucky star, born and raised in Louisville, to refresh the second-most-important federal court in the country."

Trump's nomination of Walker, who was widely panned by liberal groups that also opposed his initial nomination to the U.S. District Court for the Western District of Kentucky -- which ended in a party-line confirmation vote -- followed the president's pick earlier in the week of Cory Wilson, a judge on a Mississippi state appeals court, for the Fifth Circuit. McConnell said Wilson had "impressive experience in public service."

But these two circuit court nominations weren't the only ones McConnell and Trump have ushered through between more pressing priorities in the past few months.

Minutes after Chief Justice John Roberts gaveled out Trump's impeachment trial, which had consumed the body for almost three weeks, McConnell filed cloture on the controversial nomination of Judge Andrew Brasher to the 11th Circuit Court of Appeals. He was confirmed by a 52-43 vote just days later on Feb. 11, right as governments worldwide were beginning to understand the seriousness of the coronavirus pandemic.

McConnell and Trump have installed 51 circuit judges during Trump's time in office and 193 judges to Article III courts overall, according to a Heritage Foundation count. The most recent president to have more than 30 circuit court judges installed by March 11 of his fourth year was Bill Clinton, who managed to secure the confirmations of 33 circuit judges by that time.

But four years of uninterrupted GOP control of the Senate and White House could be under threat in November. Republicans seem confident they will be able to hold on to the Senate and maybe even take the House of Representatives. But there are far more vulnerable Republican senators up for reelection in the fall than vulnerable Democrats, and Republicans hold a slim 53-seat majority.

Add to that the fact that Trump is underperforming in most head-to-head polls against likely Democratic presidential nominee Joe Biden, and Republicans have good reason to keep their conveyer belt of lifetime-appointed judges whirring all the way through 2020.

"I have been honored to partner with the President as we work to strengthen the federal judiciary with impressive men and women who understand that the job of a judge is to apply our laws and Constitution as they are actually written," McConnell said in his Friday statement on Walker. "Lifetime appointments to the federal judiciary are among the Senate’s most serious and impactful responsibilities. I am glad the President continues to send us outstanding nominees whose confirmations will strengthen the rule of law in our country and the future of our Constitution."

But a possibly fast-approaching deadline for Republicans can also mean a light at the end of the tunnel for Democrats, who have lacked the votes to stop any judicial nominees during the Trump presidency after former Senate Majority Leader Harry Reid, D-Nev., removed the 60-vote filibuster threshold for lower court nominees during Former President Obama's time in office. McConnell scrapped it for Supreme Court nominees after Democrats filibustered Justice Neil Gorsuch's nomination in 2017.

Democrats are now redoubling efforts against Trump's picks, particularly Walker, who's nominated for the same circuit court on which Kavanaugh, as well as Justices John Roberts, Clarence Thomas, Ruth Bader Ginsburg and Antonin Scalia once sat.

"The nomination of a Mitch McConnell crony, who has been rated unqualified by his peers, to the second-highest court in the country is beyond suspicious," said Demand Justice, a progressive group run by former Obama and Hillary Clinton staffer Brian Fallon.

The statement continued: "We need an immediate investigation into whether McConnell manufactured this vacancy by unethically pressuring Judge Thomas Griffith to retire now."

Walker would replace the retiring Griffith, who is stepping down in September. Griffith is a George W. Bush appointee so Walker's confirmation would not change the ideological balance of the D.C. Circuit, which has a majority of judges appointed by Democratic presidents. There's been no evidence to back a claim that McConnell might have "pressured" the federal judge, who is isolated from the political branches of government by his lifetime appointment, to relinquish his post.

On Wilson, Vanita Gupta, the president of The Leadership Conference on Civil and Human Rights, a liberal group, said the judge "has called the Affordable Care Act ‘freedom-infringing,’ ‘perverse,’ and ‘illegitimate."

She continued: "We call on the White House and Republican senators to prioritize the safety and health of everyone in this country instead of installing judges who will endanger our collective well-being during such a dangerous and unsettling time."

Meanwhile, 22 leaders of high-profile conservative organizations signed a letter on Friday urging the Senate to back Walker's nomination, saying the judge's "everyday-American upbringing, impeccable credentials, dedication to principled judging, and reputation for collegiality is impressive."

Article III Project President Mike Davis, whose group -- which boosts Trump judicial nominees -- organized the Friday letter, expressed confidence that the Senate would be able to efficiently move forward with the president's judicial nominations even during the pandemic.

"Judicial nominations have been, and will continue to be, a top priority under Senator Mitch McConnell's leadership. The Senate is fully capable of moving judicial nominations and dealing with the coronavirus," said Davis, the former chief nominations counsel for former Senate Judiciary Committee Chairman Sen. Chuck Grassley, R-Iowa. "This is why the Senate divides up the work among the committees. The Senate can walk and chew gum at the same time."

The nominations for both Wilson and Walker -- in keeping with Senate customs and barring anything major and unforeseen -- could make their way to the Senate floor as soon as early June.