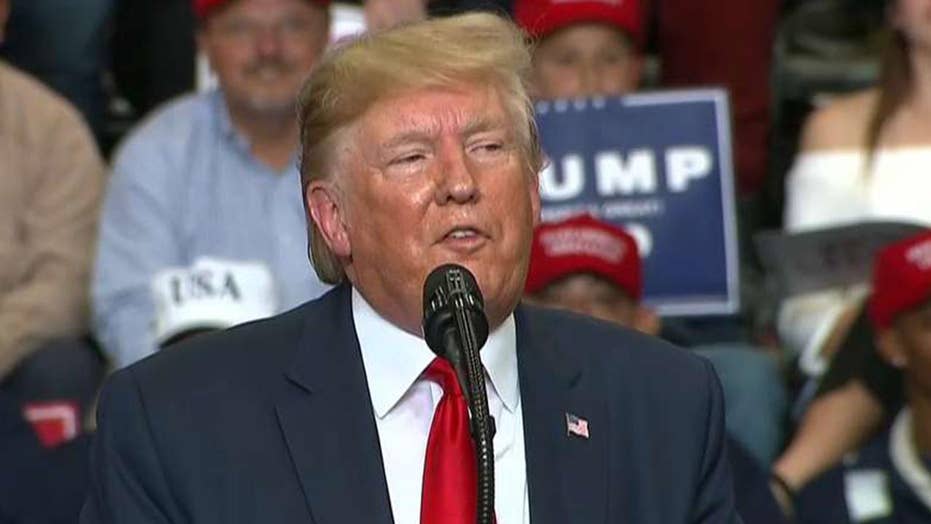 At a Keep America Great rally in Monroe, Louisiana, Trump hammered the whistleblower attorney, Mark Zaid, based on a Fox News article earlier in the day.

President Trump, at a campaign rally in Louisiana Wednesday night, unloaded on whistleblower attorney Mark Zaid, after a Fox News article from earlier in the day revealed that Zaid had tweeted about the beginning of a "coup" against the president back in 2017.

The president extensively quoted from the article, which reported that Zaid has long called for Trump's impeachment -- even promising two years ago, "We will get rid of him." Zaid asserted in his social media posts that the "coup" would occur in "many steps."

Zaid now represents the intelligence community whistleblower who is at the center of Democrats' impeachment inquiry against the president. The whistleblower has alleged that, earlier this year, Trump improperly threatened to withhold aid to Ukraine for political reasons.

"Democrats must be accountable for their hoaxes and their crimes," Trump said, holding a printout of the Fox News piece.

"I don't know if you saw, I'm just coming off the plane, and they hand me -- look at this character. They just hand me this story, ''Coup has started,' whistleblower attorney said in 2017.'"

Trump added: "That was a long time ago. It's all a hoax. They say, January 2017 -- a 'coup has started,' and the 'impeachment will follow ultimately.' It's all a hoax. It's a scam. And, you know who helps them? These people back here -- the media."

Calling Zaid a "sleazeball," Trump further noted that Zaid had declared CNN would play a role in impeaching Trump.

Fox News reported hours before the rally that in July 2017, Zaid tweeted, "I predict @CNN will play a key role in @realDonaldTrump not finishing out his full term as president."

And, amid a slew of impeachment-related posts, Zaid assured his Twitter followers that "as one falls, two more will take their place," apparently referring to Trump administration employees defying the White House.

"Can you believe this?" Trump asked. "Just came out. It's a disgrace. These people are bad people. They rip the guts out of our country."

Trump also hammered The Washington Post, saying, "19 minutes after I took the oath of office, the horrible, disgusting Washington Post -- which is a terrible paper -- an article comes out, 'The campaign to impeach President Trump has begun.'"

With the stars of the reality television show "Duck Dynasty" in attendance, Trump was in the northern Louisiana city of Monroe boosting Republican businessman Eddie Rispone in his effort to keep Democrat John Bel Edwards from a second term as governor in a crimson state Trump won by 20 percentage points. Early voting ends Saturday in the Nov. 16 election, which will mark the last governor's race of the year.

"If you're pro-God and pro-America and pro-gun and pro-duck hunting, that's all I want," Phil Robertson, one of the "Duck Dynasty" stars, said at the microphone.

"You're going out to replace a radical liberal Democrat as your governor," Trump said as the crowd booed. "John Bel Edwards has not done the job."

But, the president and other speakers at the rally also placed heavy emphasis on the upcoming 2020 election. Louisiana GOP Sen. John Kennedy, after praising Trump's time in the White House as a boon to the country, colorfully accused Democrats of trying to distract from the administration's successes.

"Speaker Nancy Pelosi is trying to impeach him," Kennedy said. "I don't mean any disrespect, but it must suck to be that dumb."

At one point, the president identified an 8-year-old in the crowd and said the child probably knew more about the energy industry than Hunter Biden did.

The president went on to tout his accomplishments in office, including record-low unemployment numbers and the killing of ISIS' leader, before turning to a critique of Hillary Clinton.

"Is there any place you would rather be than a Trump rally, on a beautiful evening in Louisiana?" Trump asked, as the crowd chanted, "Lock her up," and cheered. "Would you rather be at LSU vs. Alabama, or a Trump rally?"

Over a thousand people were gathered outside the Monroe Civic Center early Wednesday morning, and over 40,000 people obtained tickets for the event. However, tickets have not guaranteed entry to Trump's rallies, and the arena would hold up to 10,000 people.

At the rally, Trump announced he would be back in Louisiana on Thursday for another rally at the CenturyLink Center in Bossier City.

Some members of the NAACP Monroe/Ouachita Parish Branch were protesting Trump's arrival just outside of the arena, the Monroe Star reported. Echoing the chants at a recent rally hosted by Bernie Sanders and Rep. Ilhan Omar, D-Minn., the demonstrators also yelled, "Lock him up."

But, pro-Trump enthusiasm was largely high among attendees in a festival-like atmosphere.

"He's the best president we've had in quite a long time," Darlene Smith of Mississippi told the paper. "He's in it for the people. He's not in it for the money. He's not getting paid."

WATCH: DEMS CHANT 'LOCK HIM UP' AT FIERY OMAR-SANDERS RALLY

An endorsement video circulated by the state GOP showed Trump describing Rispone as "a fantastic man, a great success. Everything he's touched has turned to gold." The president, who also has planned a Nov. 14 rally in Bossier City for Rispone, called Edwards "a disaster." 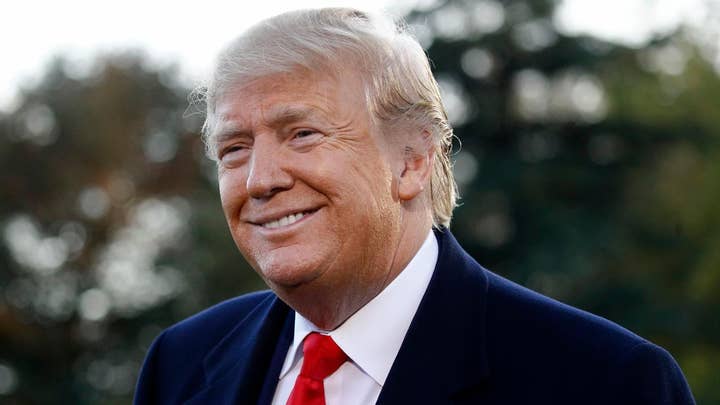 Republicans have aimed to reclaim the governorship in a Deep South state where they've claimed Edwards won in a 2015 fluke election against a flawed candidate beset by a prostitution scandal. Democrats have said securing a second Edwards victory could demonstrate competitiveness in states where the party rarely has achieved a statewide office.

A GOP loss could raise questions about the strength of Trump's political coattails, but not necessarily his reelection chances, particularly since Louisiana is expected to back the president for reelection in 2020.

Trump was visiting the heart of the congressional district represented by Republican Ralph Abraham, the third-place finisher in the gubernatorial primary. Both Rispone and Edwards have been competing for Abraham's voters. Polls showed a tight race, with few undecided voters and both campaigns hoping Trump will mobilize their bases.

"Most people have made up their mind. This is essentially a tie race at this point. It's who gets out the vote," Rispone told a Republican women's luncheon Tuesday.

A longtime Republican political donor who has poured millions of his own money into the campaign, Rispone has tied his candidacy to Trump, introducing himself to voters in TV ads by talking about his support for the president.

KENTUCKY GOV'S RACE TOO CLOSE TO CALL, AS TRUMP SAYS HE TRIED TO 'DRAG' GOP CANDIDATE OVER THE FINISH LINE

The owner of an industrial contracting firm, Rispone has avoided many specifics about what he would do in office. Rispone's campaign strategy has involved panning Edwards as a "liberal, tax-and-spend, career politician and trial lawyer" and nationalizing the race. He regularly has compared himself to Trump, declaring both were "conservative outsiders."

Edwards, a former state lawmaker and military veteran, has downplayed national issues in favor of a defense of his own performance. He's reminded voters about his Medicaid expansion program that dropped Louisiana's uninsured rate below the national average and his work on a bipartisan tax deal that ended years of budget instability.

Both anti-abortion and pro-gun, Edwards in many ways hasn't matched the platform of the national Democrats, but he holds positions that helped him draw support in 2015 from the Republican and independent voters he'd need to win again.

Even as Trump has campaigned against him, Edwards has sidestepped criticism of the president, describing a good working relationship with the White House.

"The president is doing what his party expects him to do. When it was time for governing, he invited me to the White House nine times," Edwards said.

WHISTLEBLOWER ATTORNEY IN 2017 DECLARES THAT A "COUP HAS STARTED"

He called Trump's criticism "general talking points" he's used no matter the state or candidate. He noted, for example, that the president claimed Edwards threatened Second Amendment rights — but Edwards, Trump and Rispone haven't differed much in their positions on guns.

At a campaign stop Wednesday in Monroe, Edwards pointed to the Kentucky governor's race, where results showed Democrat Andy Beshear in the lead by a few thousand votes over Republican Gov. Matt Bevin, a Trump ally. Edwards said Kentucky voters didn't cast their ballots based on Trump's visits, and he expected Louisiana voters wouldn't either. Trump had joined Bevin at a Kentucky rally hours before Tuesday's vote.

"The people of Louisiana, like the people of Kentucky, they will decide this race based on Louisiana issues, not Washington, D.C. issues," Edwards said.

Ahead of Wednesday's rally, Rispone blamed Edwards for anti-Trump radio ads recently released by a New Orleans organization. One ad linked the president and Rispone to white supremacist David Duke and encourage minority voters to "vote against hatred" by choosing Edwards. Rispone called it fearmongering. Edwards said he had nothing to do with the advertising.

Trump's visit came a day after historic elections in Mississippi and Kentucky. The gubernatorial race in Kentucky has remained too close to call, while Republicans decisively held onto the governorship in Mississippi and elected Kentucky’s first black attorney general.

Democrats, meanwhile, took complete control over the Virginia statehouse for the first time in 26 years.