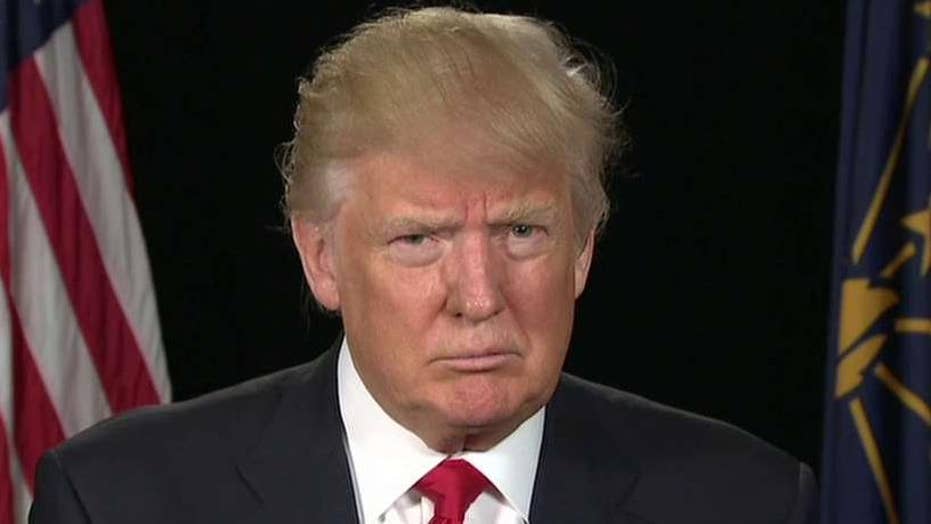 Donald Trump: 'It just all ends with Indiana'

On the eve of the Indiana primary, Republican presidential front-runner Donald Trump Monday touted a new national poll that showed him narrowly edging Hillary Clinton in a hypothetical match-up, while also taking aim at comments she made about his criticism of her campaign.

“All of the pundits, they’re all saying that ‘it’s over' if you win Indiana,” he told Fox News’ Sean Hannity.

The Rasmussen Reports survey buoyed Trump’s campaign as he seeks to add to his hot streak on Tuesday in Indiana’s primary.

The poll showed Trump edging Clinton 41-39 percent in a hypothetical match-up, the first time he’s led their polling since last October. There is an asterisk in that finding:

If voters are given the option of staying home, another recent Rasmussen survey showed Clinton and Trump tied.

He told Hannity that polling for next month’s primary in California is boosting his chances there over Republican rivals Ted Cruz and John Kasich.

“It looks like I’m going to win California big,” he said.

Trump also had some particularly strong words for Clinton and her controversial response to his criticisms of her campaign.

"I have a lot of experience dealing with men who sometimes get off the reservation in the way they behave and how they speak," Clinton said during an interview on Friday.

Trump told Hannity on Monday that was a "very derogatory statement to men."

As for Bernie Sanders, Trump said that he actually agrees with the Vermont senator on one thing: that the nation’s leaders don't know what they're doing on trade.

Trump added that he's confident that many of Sanders' supporters will eventually come over to his side, because they want jobs and they will see that he's the best candidate to make that happen.