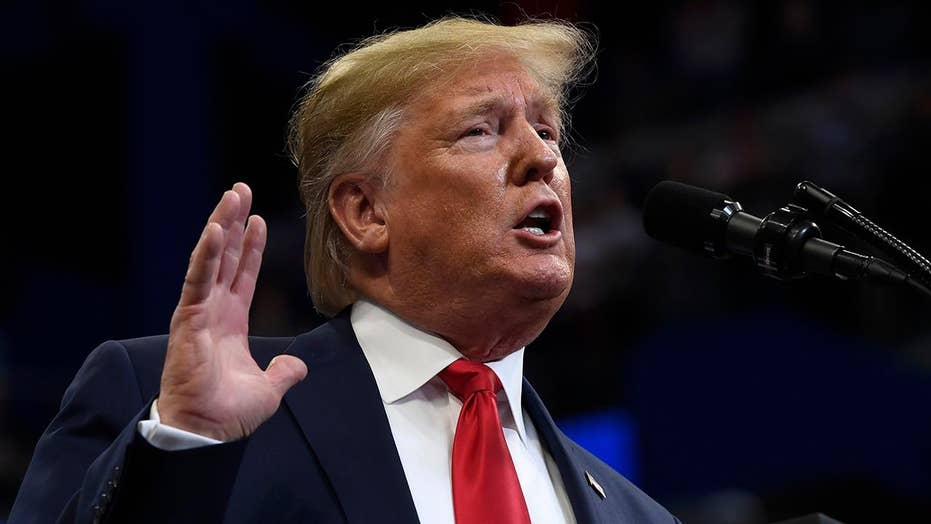 At a rally on friendly turf in Kentucky Monday night, President Trump urged what he called an "angry majority" of voters to send a powerful "signal" to Democrats and the world by handing the GOP a big victory not only in Tuesday's gubernatorial race there, but also in the pivotal upcoming statewide elections in Virginia, Mississippi, and Louisiana.

Richard Nixon had his “silent majority" and Ronald Reagan had the “moral majority." The result of the showdown in Kentucky -- as well as Tuesday's gubernatorial race in Mississippi and state legislature races in Virginia -- could serve as a barometer this week on whether Trump still has the ability to rally his "angry majority" at the voting booth amid Democrats' ongoing impeachment inquiry.

Amid chants of "USA" at Monday's rally, Trump repeatedly sought to leverage his accomplishments in office, including energy independence and historically low unemployment rates, to boost Gov. Matt Bevin.

At one point, Trump reminded the audience that American special forces had just provided "the world's number-one terrorist a one-way ticket to hell," in a colorful reference to the now-dead Islamic State leader Abu Bakr al-Baghdadi.

"The dog will be coming very shortly to the White House!" Trump remarked, shouting-out the elite canine that helped take down Baghdadi.

The president stood in front of throngs of attendees wearing "Read the transcript!" shirts -- a reference to the White House's readout of Trump's July call with Ukraine's leader, which has prompted Democrats to begin an impeachment inquiry even as Republicans insisted the conversation was benign.

"The Democrats are trying to tear our country apart," Trump said, noting that partisans had pushed the "Russia hoax" and the "Mueller scam. ... And then, Mr. Mueller testified. That was a wonderful day -- for me," referencing testimony from the former special counsel.

Calling The Washington Post "disgusting," Trump noted that the paper had reported that impeachment was coming -- just 19 minutes after he took office. (“At the moment the new commander in chief was sworn in, a campaign to build public support for his impeachment went live," the Post's piece read.)

Trump asserted that Democrats were "crazy" and obsessed with Russian conspiracy theories, noting that Hillary Clinton claimed presidential candidate Tulsi Gabbard, also a Democrat, was being "groomed" to be a "Russian asset."

To sustained applause, the president also introduced Senate Majority Leader Mitch McConnell, a fellow Republican, as a hero who "refused to cave to the left-wing mob" during the confirmation hearings of now-Associate Justice Brett Kavanaugh.

McConnell is up for re-election in 2020 against Amy McGrath, whom Trump dismissed as an "extreme liberal" who inartfully compared the president's 2016 win to the Sept. 11, 2001 terrorist attacks.

Paul: Congress needs to step up and defend the president

Later at the rally, Kentucky GOP Sen. Rand Paul called on the Ukraine whistleblower to testify, saying he was biased and that Democrats are trying to hide his identity from view.

"I say to the media: Do your job and print his name," Paul said, referring to the whistleblower.

Paul also slammed Hunter Biden for obtaining lucrative roles with companies despite having no relevant expertise while his father, as senator and vice president, pushed legislation affecting those companies.

As the rally continued, Trump hammered "Sleepy Joe" Biden as an inept elderly man whose "handlers" lived in a state of perpetual fear of the next big gaffe. He also echoed Paul's assertion that the Bidens were corrupt, saying the real "quid pro quo" was the money that the younger Biden received to curry influence with his powerful father.

"The dog will be coming very shortly to the White House!"

"America is not for sale -- and we're more determined than ever to drain the swamp," Trump said. "A lot of bad things are going to be revealed."

The president then reiterated his support for the Second Amendment, in the wake of former Democratic presidential candidate Beto O'Rourke's exit from the race. O'Rourke had run on a platform of gun confiscation.

On health care, Trump vowed to protect those with "pre-existing conditions" by preserving their "pre-existing physicians" -- a quip that the president said he coined on the spot. (President Obama had vowed, falsely, that his health care plan would allow everyone to "keep" their doctors; and Elizabeth Warren and Bernie Sanders each have pushed for "Medicare-for-all," a government-led heath care takeover.)

"Every child is a sacred gift from God," Trump added, saying Democrats are now the party of "late-term abortion."

Concluding his remarks, Trump joked that if Republicans win, the media will cover it as a "ho-hum" event -- but if Democrats win, the day will be portrayed as a major loss for the White House.

"You can't let that happen to me!" Trump said, laughing.

"Faith and family, not government and bureaucracy," the president asserted, were the foundation of the country and the principles that would carry the GOP to victory on Tuesday.

Thousands of supporters lined up outside the Rupp Arena in Lexington several hours in advance of the rally to boost Bevin, who has been locked in a dead heat with state Attorney General Andy Beshear, a Democrat. Country music star Lee Greenwood kicked off the festivities with a live rendition of Trump's preferred walk-out song, "God Bless the USA."

TRUMP ISN'T ON THE BALLOT, BUT HE'S FRONT-AND-CENTER IN KEY UPCOMING STATE ELECTIONS

Trump carried Kentucky by 30 points when he won the presidency in 2016, and has remained popular there. However, Bevin has alienated some supporters by pushing to cut state pension programs and hammering public school teachers for striking -- including his suggestion that the striking teachers indirectly bore responsibility for the shooting of a 7-year-old girl who remained at home because of school closures.

"The greatest threat to our nation is that we are so blessed," Bevin told attendees as Trump made his way to the arena. "We have it so good that we literally have the luxury of being able to afford to not care. Don’t let this happen on our watch. We’ve got to go to the polls tomorrow and let our voices be heard.”

Daniel Cameron, the GOP nominee for Kentucky attorney general, tied the election to Democrats' ongoing impeachment inquiry against the president -- and told voters they should send a specific message to House Speaker Nancy Pelosi, D-Calif.

"This is our president, and we’ll never let you take him away from this country," Cameron said.

While Trump supporters predominated outside the venue, approximately 50 vaping advocates wore "We vape, we vote" shirts and hoisted "Lock him up" signs, the Louisville Courier-Journal reported. The president has supported a ban on flavored vaping products.

Other protesters unfurled a giant "Baby Trump" balloon. Similar balloons have been seen at a variety of Trump events worldwide.

Bevin has long touted his connections with the president as beneficial to Kentucky. Trump headlined a Louisville fundraiser for Bevin this past summer.

Beshear has focused on state issues and Bevin’s feud with education groups in his bid to win in Kentucky.

"Mississippi and America need Tate Reeves to be the next governor of the great state of Mississippi," Pence told hundreds of people at the Mississippi Gulf Coast Coliseum. "Tate Reeves is Mississippi. He's a strong conservative." 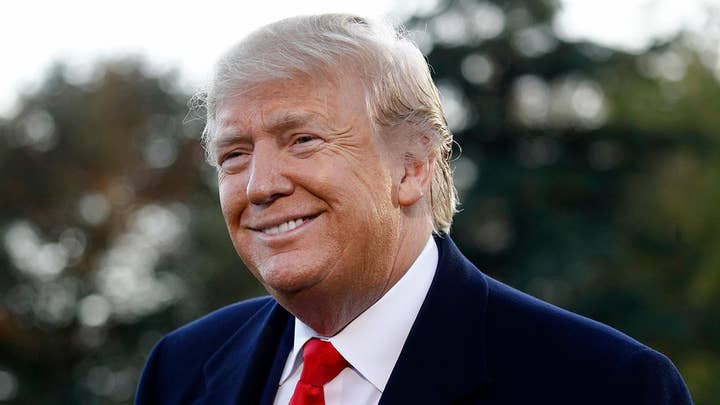 At times, the Reeves event in Biloxi sounded like a rally for Trump. People leaped to their feet and shouted, "four more years" when Pence relayed greetings from Trump.

The president campaigned for Reeves on Friday in Tupelo.

Reeves has been in his second term as lieutenant governor. The Democrat seeking the governor's office, Jim Hood, is in his fourth as attorney general; Hood has received more funding than any other Democrat in such a Mississippi race in nearly a generation.

They're on the ballot Tuesday along with two lesser-known candidates. The winner would succeed Republican Gov. Phil Bryant, who is limited by state law to two terms.

Mississippi has been locked in its most competitive governor's race since 2003, when a Republican unseated the state's last Democrat to hold the governor's office. Reeves and Hood have been spending millions of dollars, with backing from national governors' groups of both parties.

This year's race has marked a dramatic change from four years ago, when the Democrat was a long-haul truck driver who didn't vote for himself in the primary, raised little money and lost the general election by a wide margin.

Republicans have held the governorship in Mississippi for 24 of the past 28 years.

Separately, the president was blasting Louisiana’s incumbent Gov. John Bel Edwards, a Democrat who was forced into a Nov. 16 runoff against Republican businessman Eddie Rispone in last month’s non-partisan primary election after coming close but ultimately failing to win a majority.

Trump is headed to the state on Wednesday to hold a rally for the Republican challenger, who also has been locked in a tight race in the deep-red state.

Leah Askarinam, a reporter and analyst with the nonpartisan newsletter Inside Elections, noted that even in these increasingly partisan times, voters might be "willing to cross party lines when it comes to governance of their specific states."

"Gubernatorial candidates can campaign on issues that are state-specific like the state's budget and education funding -- and they can cross party lines without facing the same kind of political pressure as Senate candidates who have to work with a national legislature," Askarinam said. "We've seen candidates like John Bel Edwards support state policies that limit abortion access, for example, which is a much more difficult stance to take as a Democrat in the Senate."