President Trump took a rare swipe at 2020 Democratic hopeful Kamala Harris on Saturday, criticizing the California senator for boycotting a South Carolina criminal justice forum in protest of the group giving an award to him.

“Badly failing presidential candidate @KamalaHarris will not go to a very wonderful largely African American event today because yesterday I received a major award, at the same event, for being able to produce & sign into law major Criminal Justice Reform legislation, which will greatly help the African American community (and all other communities), and which was unable to get done in past administrations despite a tremendous desire for it,” Trump tweeted Saturday morning.

He added: “This and best unemployment numbers EVER is more than Kamala will EVER be able to do for African Americans!”

The president’s tweets came after he received the Bipartisan Justice Award from the 20/20 Bipartisan Justice Center for his efforts to pass the First Step Act, which grants early release to thousands of nonviolent offenders who are currently serving time in federal prisons.

Later Saturday, Harris hit back at Trump on Twitter, saying: "My whole life I've fought for justice and for the people — something you'd know nothing about. The only part of criminal justice you can claim credit for is the “criminal” part."

Instead of attending the forum, Harris said Friday she would “host students from all campuses, as well as the broader Columbia community to come and discuss this critical issue that I’ve worked on for my entire career.”

“As the only candidate who attended an HBCU, I know the importance that these spaces hold for young Black Americans,” Harris said in a statement Friday.  “Today, when it became clear Donald Trump would receive an award after decades of celebrating mass incarceration, pushing the death penalty for innocent Black Americans, rolling back police accountability measures and racist behavior that puts people’s lives at risk, and then learned all but ten Benedict students are excluded from participating, I cannot in good faith be complicit in papering over his record.” 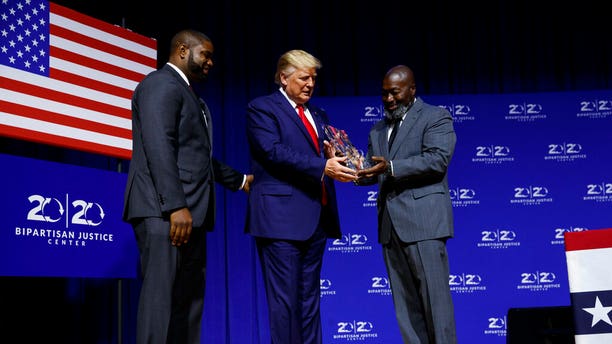 President Donald Trump is awarded the Bipartisan Justice Award by Matthew Charles, right, one of the first prisoners released by the First Step Act, during the "2019 Second Step Presidential Justice Forum" at Benedict College, Friday, Oct. 25, 2019, in Columbia, S.C. (AP)

Harris was among 10 Democratic presidential hopefuls expected to attend the forum.

“Donald Trump is a lawless President,” Harris continued.  “Not only does he circumvent the laws of our country and the principles of our Constitution, but there is nothing in his career that is about justice, for justice, or in celebration of justice.”

Later Saturday, Harris hit back on Twitter: "My whole life I've fought for justice and for the people — something you'd know nothing about. The only part of criminal justice you can claim credit for is the “criminal” part."

The senator has come under fire for her own record on criminal justice reform. Her campaign has consistently touted the progressive aspects of her career as district attorney and later attorney general of California, which include introducing a proposal for nationwide bail reform, as well as legalizing marijuana, which is a part of her comprehensive criminal justice reform agenda if she is elected president in 2020.

As of mid-week, polls showed Harris behind former Vice President Joe Biden, the top contender for the 2020 Democratic nomination, by nearly 22 points, drawing only 5.3 percent support, according to RealClear Politics.