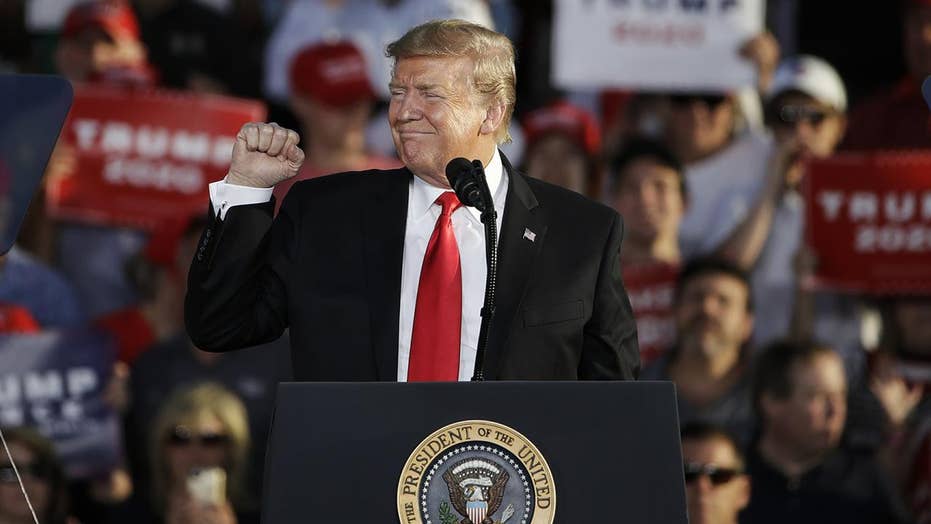 Trump: We’re going to have another term and it’s going to be great

President Trump jokes that he could serve as many as five terms during a MAGA rally in Montoursville, Pennsylvania.

President Trump joked that he could serve as many as five terms during a campaign rally Monday, just a month after tweeting that his first two years in the White House were robbed from him as a result of Special Counsel Robert Mueller’s investigation.

"Now we're going to have a second time," the president began while addressing a crowd at a “Make America Great” rally in Montoursville, Pa. Monday evening.

"And then we'll drive them crazy. Ready? And maybe if we really like it a lot and if things keep going like they're going, we'll go and we'll do what we have to do. We'll do a three and a four and a five."

Trump then clarified he’s confident he’ll secure a second presidential term following the 2020 election. "We're going to have another one, and it's going to be great," he said.

Earlier this month, Trump retweeted Jerry Falwell Jr., the conservative president of Liberty University in Virginia, who said the president should have two years added to his first term as “pay back for time stolen by this corrupt failed coup,” referring to Mueller's investigation into Russian influence in the 2016 presidential election.

In a response two hours later, the president echoed Falwell’s sentiments, writing “Despite the tremendous success that I have had as President, including perhaps the greatest ECONOMY and most successful first two years of any President in history, they have stolen two years of my (our) Presidency (Collusion Delusion) that we will never be able to get back.”

“The Witch Hunt is over but we will never forget. MAKE AMERICA GREAT AGAIN!,” Trump added in another tweet.