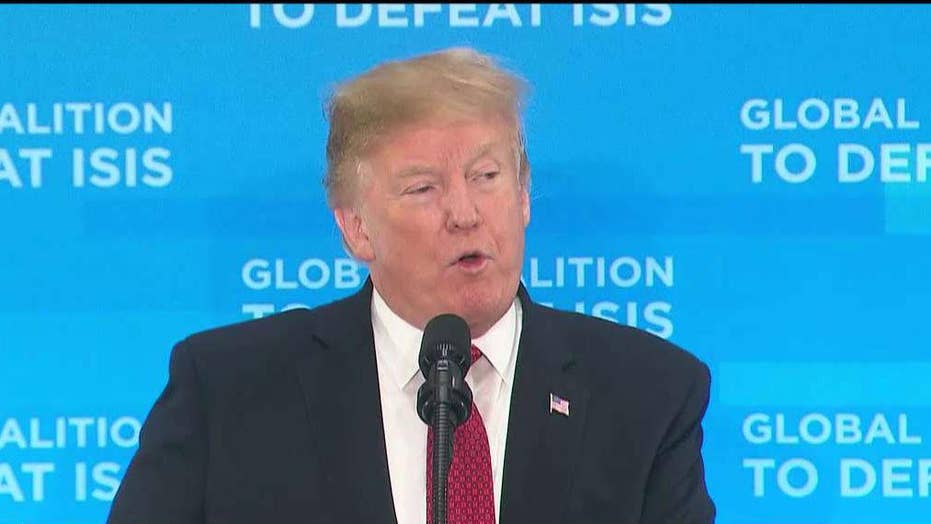 “It should be formally announced that sometime, probably next week, that we will have 100 percent of the caliphate,” Trump said at a summit of the Global Coalition to Defeat ISIS.  “I want to wait for the official word. I don't want to say it too early.”

Senior diplomats from nearly 80 countries gathered Wednesday at the State Department for a meeting of the growing anti-ISIS coalition. The president acknowledged this group will work together for years to come as ISIS strategy evolves. A senior administration official said the Islamic State has been promoting an insurgency to destabilize northeastern Syria and Iraq.

“ISIS remains a menace, one that is our generation’s responsibility to stop,” Secretary of State Mike Pompeo told the coalition.

Despite opposition, Trump said he is proceeding with plans to withdraw all U.S. troops from Syria. Pompeo defended the decision, saying that as ISIS loses its remaining territory, the coalition will rely less on the military and more on intelligence.

"The drawdown of troops is essentially a tactical change – it is not a change in the mission," said Pompeo.

The coalition has met regularly since its 2014 founding. Absent Wednesday from this coalition: the former presidential envoy to it, Brett McGurk. He quit following the president’s troop withdrawal announcement. Former Defense Secretary James Mattis also resigned.

“These are people that are intimately knowledgeable of the conditions of the ground, of -- of our allies there, and they simply couldn't in conscience -- in good conscience stay in office. That's a pretty bad sign,” said Sen. Ron Johnson, R-Wis., on “Fox News Sunday.”

Across town, Maj. Gen. James Hecker, the vice director of operations for the Joint Chiefs of Staff, told the House Armed Services Committee "there will be a decrease in the amount of pressure that we will be able to apply" on ISIS because of the U.S. troop pullout, according to The Associated Press.

Pompeo said the coalition also focused on captured ISIS fighters. “Members of this coalition must be willing to take back foreign terrorist fighters, prosecute them and punish them,” he said.

Iraq and Syria need hundreds of millions of dollars in aid, according to administration officials.  “We’ve all agreed that this is a critical national security and humanitarian priority, so now is the time for all of us – not just America – to put our money where our mouth is,” Pompeo told the coalition.  “Everyone should contribute.”