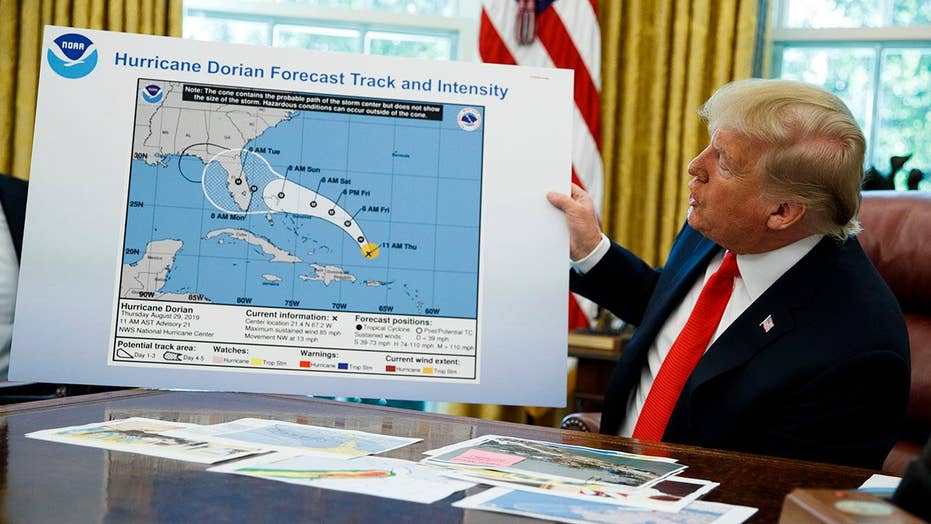 President Trump on Thursday launched a renewed effort to push back on criticisms of his claim that Hurricane Dorian’s path had threatened Alabama, sharing maps to make his case and insisting it is unfair and incorrect to say the state was never threatened by the storm.

“Just as I said, Alabama was originally projected to be hit. The Fake News denies it!” the president tweeted Thursday afternoon – following several other tweets on the subject throughout the day.

Amid a relentless defense over his comments, the president on Thursday afternoon invited Fox News into the Oval Office to stress that forecasts for Dorian last week had Alabama in the warning cone, providing a graphic from the National Hurricane Center and a screenshot of a news report on NBC.

Fox News was told that Trump was shown a graphic prior to his FEMA briefing last week that appeared to show an older forecast track with Dorian going north through the Florida peninsula and just grazing Alabama.

The president on Thursday afternoon invited Fox News into the Oval Office to argue that forecasts for Dorian last week had Alabama in the warning cone and provide graphics, like this one from the National Hurricane Center. (John Roberts/Fox News)

The White House on Thursday night also released a statement from Rear Adm. Peter J. Brown, the president’s homeland security and counterterrorism adviser, who said he briefed the president on Sunday about the storm, including “possible storm impacts well outside the official forecast cone.”

“The president’s comments were based on that morning’s Hurricane Dorian briefing, which included the possibility of tropical storm force winds in southeastern Alabama,” Brown said.

The adviser acknowledged that “the forecast track changed substantially over time” and some places “saw minimal to no impact from Hurricane Dorian.”

The president’s repeated defense of his comments about Alabama follows media scrutiny over his claims, first made over the weekend. The issue popped up again Wednesday when the president held up a map in the Oval Office showing the “cone of uncertainty” over areas the storm could hit.

The map seemed to include a section of Alabama and the Florida panhandle circled with black marker.

When asked about the markings on Wednesday, Trump said Alabama was in the "original forecast."

"I know that Alabama was in the original forecast, they thought they would get it as a piece of it. ... We had many lines going directly, many models, each line being a model, going directly through, and in all cases, Alabama was hit, if not likely, in some cases, pretty hard," Trump said Wednesday.

"They actually gave that a 95 percent chance probability. It turned out that's not what happened--it made a right turn up the coast," he continued. "But Alabama ... was going to be hit very hard, along with Georgia. But under the current, they won't be, but Georgia will be possibly."

Trump was then asked about the apparent marker markings, to which he replied, "I don't know."

Trump also tweeted a map Wednesday night saying “this was the originally projected path of the Hurricane in its early stages.”

“As you can see, almost all models predicted it go through Florida also hitting Georgia and Alabama. I accept the Fake News Apologies!” he tweeted.

This has been a subject of debate ever since the weekend, when Trump first tweeted that Dorian had the potential to cross Alabama. He also said in a briefing that "Alabama could even be in for at least some very strong winds and something more than that."

The National Weather Service's Birmingham office said otherwise, tweeting that the state would "NOT see any impacts" from the storm.

But the president, on Thursday, highlighted an earlier tweet from Alabama's National Guard saying they were "ready to act" if the storm hit Alabama.

"I was with you all the way Alabama," he tweeted.