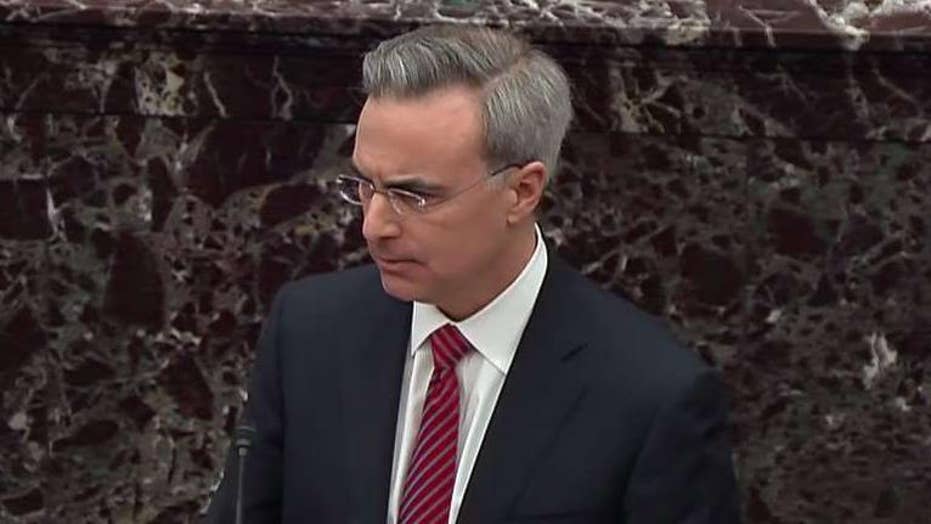 White House lawyers went on the offense Tuesday in the opening of the Senate impeachment trial of President Trump, railing against Rep. Adam Schiff in personal terms and accusing Democrats of trying to overturn the will of the American people.

The president's lawyers framed the impeachment trial as a political vendetta to oust Trump and said House Democrats have "no case."

"It's a partisan impeachment they've delivered to your doorstep in an election year," White House Counsel Pat Cipollone said.

“Some of you should be in Iowa,” Cipollone added as Democratic White House hopefuls Sens. Bernie Sanders and Elizabeth Warren sat stone-faced. “Instead we're here and they're not ready to go. It's outrageous."

Schiff, the Democratic chairman of the House Intelligence Committee, took the lead in arguing the case for Democrats and spent his opening remarks before the Senate making the case on the procedure to allow new witnesses and documents into the trial – as is customary in past impeachment trials, he said.

“Right now...most Americans do not believe there will be a fair trial,” Schiff said, adding that Americans believe Trump will be acquitted not because of innocence but because of a partisan vote.

"Let's prove them wrong," he said.

While Schiff largely made a case about the issue at hand – the rules resolution that was up for debate, Trump’s lawyers went for the jugular.

“It is very difficult to sit there and listen to Mr. Schiff tell the tale that he just told,” Cipollone said.

He laid into Schiff for kicking off the House impeachment proceedings for taking dramatic liberties with the phone call Trump had with the president of Ukraine.

Each time, Schiff’s name was invoked by Trump’s lawyers, Schiff sat at attention and stared them down. He was stoic, though at one point he nodded his head in disbelief to his attorneys when Cipollone accused him of blocking Republicans to the secret impeachment proceedings in the House basement known as the SCIF.

Republicans were welcome to the proceedings and could ask questions of the witnesses, but those who were not members of the committee or those who tried to bring in banned electronic devices were not allowed.

“They have no witnesses to absolve the President of the facts,” Schiff said.

Earlier in the day, Democrats and Republicans were warring over the rules while Trump touted the U.S. economic boom several time zones away.

Sen. Chuck Schumer took to the Senate floor immediately before the proceedings began to rail against the rules proposed by Senate Majority Leader Mitch McConnell to govern the trial, calling them a “national disgrace” and an attempt to conduct a trial at 2 a.m.

But McConnell pledged a “fair impeachment trial” and said he’ll move to table or kill various motions that he thinks alters the framework.

“No one should dictate process to United States senators,” McConnell said.

McConnell did make changes to the resolution on the fly. Instead of two days for each side to argue their opening case over 24 hours, McConnell’s resolution was updated to three days and it adds assurances that House evidence will be admitted to the record.

“The public is understanding how unfair Senator McConnell’s trial rules are and Republican senators are beginning to tell him to change them. The real test will be if they pressure Senator McConnell to allow witnesses and documents,” Schumer said after McConnell caved on some of the provisions.

“For all of the name-calling and fingerprinting from the president’s counsel, we did not hear a single argument on the merits about why there should not be the documents and witnesses we requested in this trial.”

Schumer offered an amendment to subpoena the White House for documents related to withholding aid from Ukraine, but it failed on a party-line vote. He's offering more amendments for documents and witnesses.

Before the trial resumed, House aides were spotted wheeling over impeachment documents to the Senate side and the House managers held court complaining about a “rigged” trial. Meanwhile, Trump was meeting with world leaders at an economic forum in Davos and avoided the impeachment spectacle unfolding in Washington that will determine whether he stays in office.

Before the substance of the case could begin in earnest, Chief Justice John Roberts administered the oath of office to Sen. Jim Inhofe of Oklahoma, who was absent last week attending to a family medical issue. With all 100 senators sworn in, then the thorny issues of the rules took center stage.

McConnell says he has the votes to pass a resolution that governs the time each side will get for the impeachment trial, while leaving the controversial issue of witnesses for consideration after the first phase of arguments.

It’s only the third such impeachment in U.S. history.

But the Senate gallery was hardly at capacity for the landmark day with many empty seats. Roughly 250 non-journalists were spectators to this moment of history sitting in the gallery above the Senate during Schiff's first statements.

Unlike other days when they can mill freely, senators sat quietly and listened as Schiff and White House lawyers made their arguments. Their wooden desks were covered in paperwork, binders and notepads. Many were taking notes. Only McConnell and Schumer had desks that were nearly bare.

With senators relegated to their seats, the main movement on the floor came from Senate aides walking in to refill water glasses and deliver paperwork and official senate transcribers who were standing and typing each word of the day.

There were brief moments of emotions. When Trump lawyer Jay Sekulow came to the microphone in the well of the Senate, his loud booming voice jerked some attendees into attention. Sen. Lindsey Graham, R-S.C., a loyal Trump supporter, nodded in agreement when Sekulow railed against the vague, “non-crime” allegations underpinning the impeachment case.

And Republican Sen. Tim Scott, R-S.C., smiled and nodded in approval to Sen. Ben Sasse, R-Neb., after Sekulow accused Democrats of seeking a “reassurance policy” or an “umbrella policy” in the Ukraine investigation after their efforts to impeach Trump over Russia failed.

“Why are we here? Are we here because of a phone call, or are we here before this great body because since the president was sworn into office, there was a desire to see him removed,” Sekulow said.

Two curved tables were brought onto the Senate floor to accommodate the House managers and Trump’s legal team. Trump had nine people at his table and the House Democrats had 15 people – the seven House managers, plus additional attorneys working on the impeachment trial.

No senators were allowed to have electronic devices, but Trump’s defense team had two laptops open amid their binders and paperwork. House Democrats had one laptop fired up to play videos and show visual statements to accompany their arguments.

The case centers on Trump asking the newly elected president of Ukraine for investigations into his political opponents with a White House meeting and millions in security assistance hanging in the balance. The articles of impeachment allege Trump abused the power of his office for personal gain in the 2020 election and then obstructed Congress by blocking witnesses and documents.

But the White House argues there was no crime and the process of the investigation was so partisan and flawed that the articles are “constitutionally invalid.”