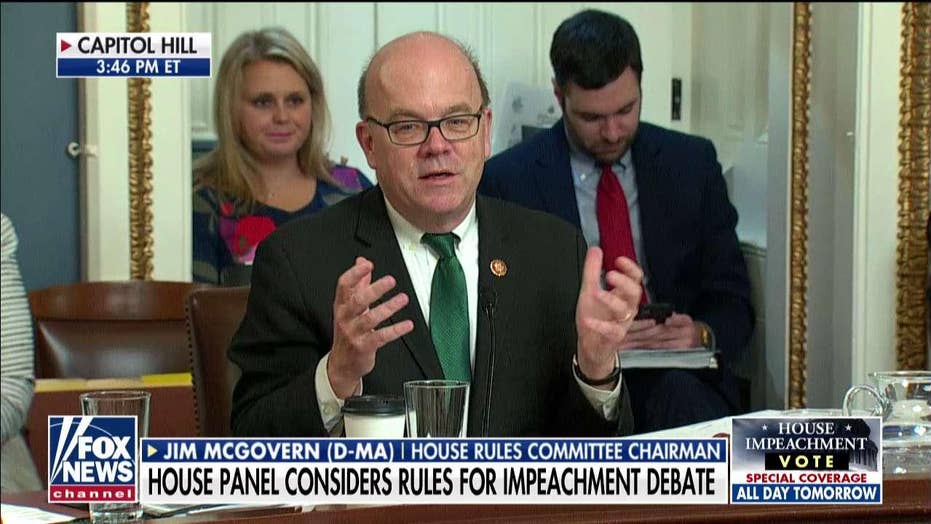 House Rules Committee Chairman James McGovern, D-Mass., said during Tuesday's hearing that the impeachment process is intended to stop a "crime in progress" and prevent President Trump from "rigging" the 2020 election.

McGovern paused the proceedings as committee member Rep. Rob Woodall, R-Ga., finished speaking about potential "repercussions" that the Democrats' accelerated impeachment process will have on the Constitution and future administrations.

"We keep on hearing about the 'clock-and-calendar'," McGovern said. "I would remind everyone that we are here because of abuse and obstruction -- the president's abuse of power and obstruction of Congress."

"My friends [Republicans] characterize this as trying to overturn the last election," the Massachusetts lawmaker continued. "I look at this as a crime in progress."

McGovern claimed Trump's activity surrounding Ukraine is unprecedented in American history and urged the panel to understand impeachment proponents are trying to prevent the president from rigging the next election.

"I've never ever seen or witnessed a moment like this," he said, claiming Trump invited foreign interference in the 2016 presidential election and is trying to do so again.

Torres said Trump's widely-circulated remark during the 2016 campaign rally that "I could stand in the middle of Fifth Avenue and shoot somebody and I wouldn't lose voters" is an insight into how the president thinks and claimed people who turn "a blind eye" to such behavior are enabling him.

"President Trump famously said he could shoot someone dead in the middle of Fifth Avenue in New York City and he would get away with it -- what mindset do you have to be in to say that out loud on national TV and to believe that?" asked Torres, who added that attended Trump's inauguration in 2017, "in good faith, " in support of the peaceful transfer of power, rule of law, and "second chances." However, reports that Trump withheld military aid to Ukraine soured her on the president further.

"I, like all of you here, did not come to Congress to impeach a president," she remarked.