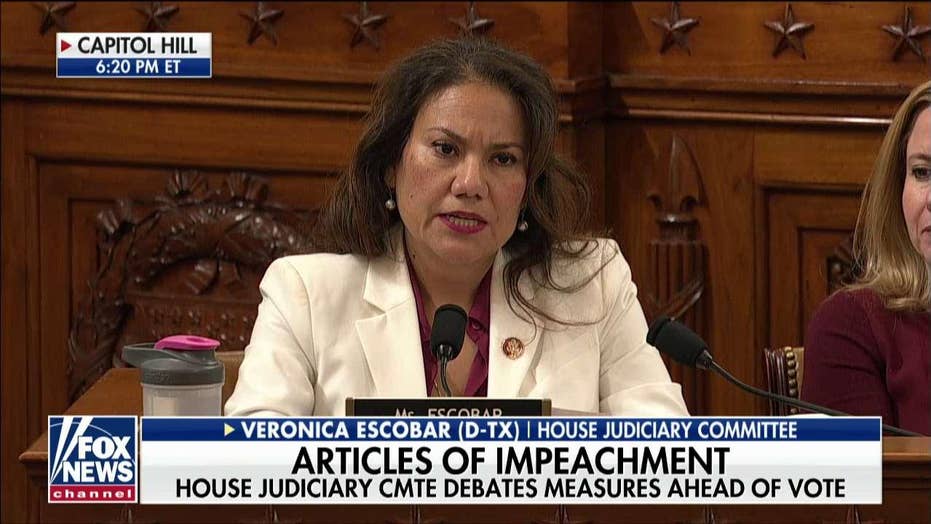 Escobar said during a committee hearing that the entire situation marks a "dark moment in American history," and agreed with Rep. Madeleine Dean, D-Pa., that those executive branch officials who testified during earlier House proceedings are American "heroes."

She began her remarks by criticizing statements made by Republican members, including Rep. Mike Johnson, R-La., who had claimed earlier that Trump has "consistently cooperated with Congress to fulfill its oversight and investigatory responsibility."

ERIC TRUMP: NANCY PELOSI HAS 'LOST CONTROL OF HER CAUCUS

"There's a thread that runs through all of those hearings, especially those hearings where we are trying to provide proper oversight over the president of the United States," she said. "We have heard our heard colleagues argue obstruction of Congress has not happened, one of our colleagues called the charge ridiculous. Another colleague said, 'The president has consistently cooperated with Democrats.' A stunning statement."

"This idea that the president has cooperated -- that is the claim that is actually absurd," she added.

Escobar accused Trump of baselessly claiming "absolute immunity" from congressional oversight while simultaneously failing to provide or list documentation that would bear out such a privilege.

She said that, in that regard, the president was less responsive to oversight and subpoenas than fellow Republican President Richard Nixon during his impeachment investigation.

"This president has achieved a new low, and has lowered the bar significantly," she remarked.

Turning to Rep. Eric Swalwell, D-Calif., Escobar asked her colleague to lay out how Trump has allegedly obstructed Congress' investigation.

"Representative Swalwell, how many documents did [the House Intelligence Committee] request during this investigation?" she asked.

"Seventy-one documents from the White House," Swalwell, who serves on that committee, replied. "[in addition to] 12 witnesses we asked to show up, whom the president directed not to show up."

Escobar thanked Swalwell for the information and asked aloud why Trump is trying to "hide" information from the public.

She continued, claiming that Trump "not for America" but acting in favor of his own selfish ends.

"This is a reckoning for us and this is a moment when we should be standing with the patriots," Escobar added before yielding back to Chairman Jerrold Nadler, D-N.Y.