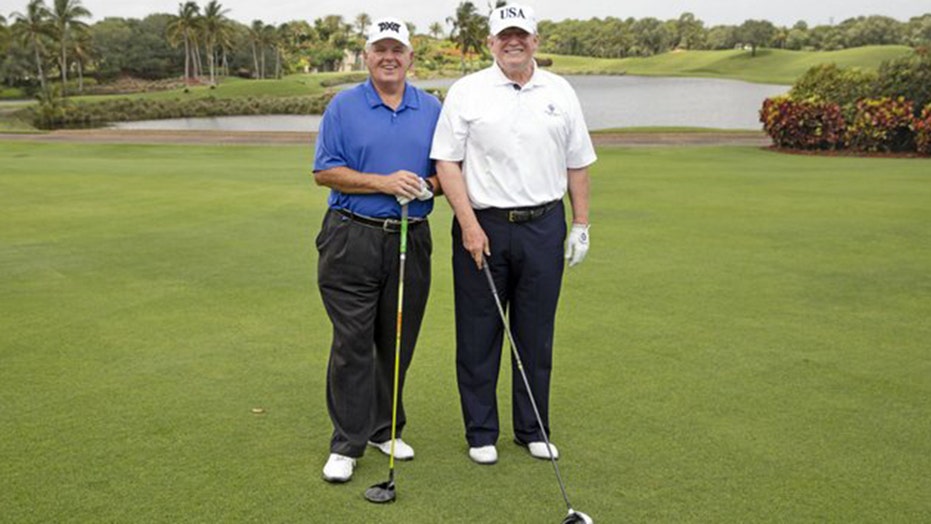 The snapped showed a smiling Trump posing with Limbaugh on the golf course at Trump International Golf Club in West Palm Beach, Fla., near his Mar-a-Lago club. Another photo captured Trump and Limbaugh posing with professional golfer Lexi Thompson on the green.

On Friday, the White House announced Trump, who is in Florida for the Easter weekend, would be playing golf at his club after some early morning rain had cleared. The White House said Limbaugh “and a couple of friends” would be joining him.

Trump’s golf outing came one day after Special Counsel Robert Mueller’s redacted report was released to the public. The report did not find evidence of collusion between the 2016 Trump campaign and Russia, but it did reveal an array of controversial actions by the president that were examined as part of the investigation’s obstruction inquiry. The 448-page report described numerous cases where Trump discouraged witnesses from cooperating with prosecutors and prodded aides to mislead the public on his behalf to hamper the Russia probe he feared would cripple his presidency.

On Thursday, Limbaugh said on his radio program that the investigation was “bogus from the beginning." Limbaugh has criticized the investigation before. During an appearance on Fox News Channel’s “Special Report with Bret Baier,” the radio host called the Russia investigation “a manufactured coup” against Trump.

On Saturday, Trump lashed out at the investigation.

“Despite the fact that the Mueller Report should not have been authorized in the first place & was written as nastily as possible by 13 (18) Angry Democrats who were Trump haters, including highly conflicted Bob Mueller himself, the end result is No Collusion, No Obstruction!” Trump tweeted.