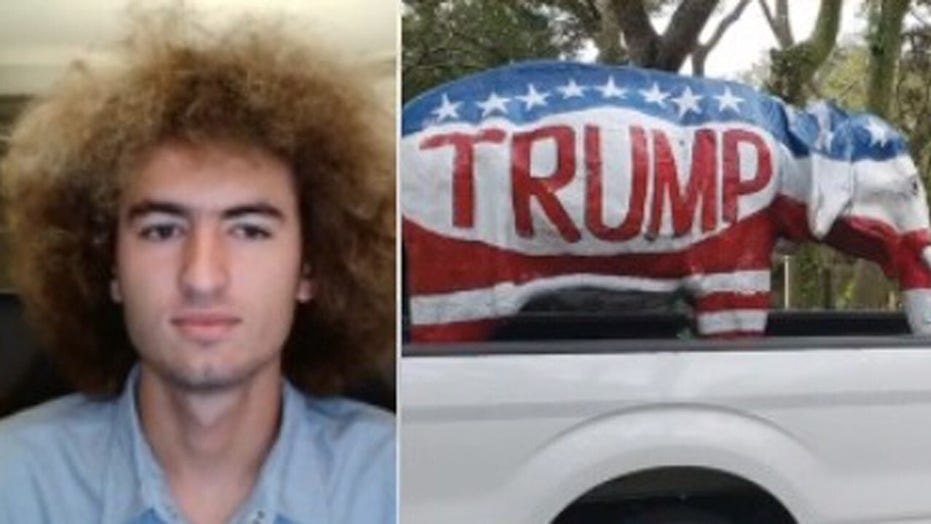 A Florida high school senior is suing his district for taking issue with a large elephant statue he put in the back of his pickup truck emblazoned with President Trump's name.

"I was told I had to hand over my parking pass, and I was not allowed to park there anymore," Tyler Maxwell said Saturday on "Fox & Friends Weekend."

The 18-year-old, who is voting for the first time on Nov. 3, said he was not given a reason at first. The Volusia County School District then said it wouldn't allow its parking lot to be used for "political statements."

Jacob Hubert, a Goldwater Institute lawyer representing the student, said political speech can only be censored if it is a threat or will cause a disruption, which isn't the case. He noted that students at the school are allowed to have Biden bumper stickers and wear Black Lives Matter apparel.

"The Supreme Court has said that under the First Amendment, students have the right to political expression when they go to school," Hubert said. "You don't give that up just because you go on to school grounds."

Hubert filed a freedom of speech lawsuit against the district in federal court after Maxwell was reprimanded on Sept.14 for his statue. The teen switched to distance learning while he was waiting for the judge to make a ruling, FOX 35 reports.

On Friday, the judge granted a temporary restraining order against the district, which means Maxwell can return to the school lot with the elephant.

"I feel pretty good," Maxwell said of the outcome. "I hope this is a good look into what's going to be happening in the near future."

Nancy Wait of Volusia County Schools provided a statement on behalf of the school board, superintendent, principal, and assistant principal.

"The school board has an obligation to provide politically neutral campuses for all students," Wait wrote. "We allow political expression by students in the form of a t-shirt or bumper sticker. But large signage is a different situation. A passerby could interpret a large sign in a school parking lot to be an endorsement by the school district. We don't allow our parking lot to be used for political statements."