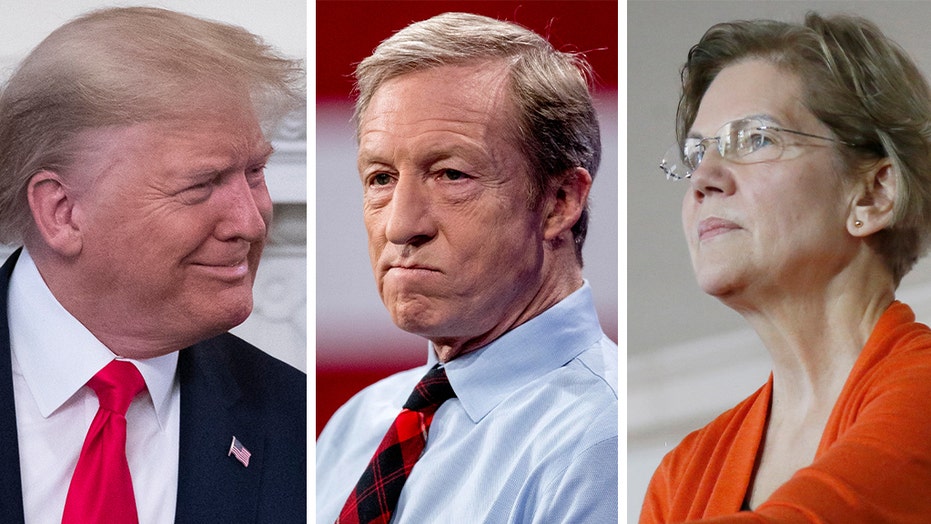 President Trump weighed in Tuesday night on Sen. Elizabeth Warren, D-Mass., and billionaire Democratic donor Tom Steyer, both of whom had underwhelming showings in the New Hampshire primaries.

This is seen as a blow to the Warren campaign, as she not only failed to have a bigger turnout in her neighboring state, but she -- along with former Vice President Joe Biden -- also fail to earn any delegates out of New Hampshire; neither of them earned the required 15 percent of voters.

The president tweeted that Warren was "having a really bad night."

"Elizabeth Warren, sometimes referred to as Pocahontas, is having a really bad night. I think she is sending signals that she wants out. Calling for unity is her way of getting there, going home, and having a 'nice cold beer' with her husband!" Trump said.

Trump has repeatedly called Warren "Pocahontas" due to the controversy that has plagued the Massachusetts senator, who had made numerous apologies for repeating her years-old claim that she had Native American heritage.

He also alluded to the livestream Warren made before launching her presidential bid, where she memorably narrated herself drinking a beer in the kitchen.

"Hold on a second -- I'm gonna get me a beer," she said, as she walked out of view of the camera.

"Um, want a beer?" she then asked as her husband briefly entered the room.

"No, I'll pass on a beer for now," he said, offering a quick farewell as he exited: "Enjoy your beer."

Trump then tweeted about billionaire candidate Tom Steyer, who placed sixth with less than four percent of New Hampshire voters.

"Impeachment King Steyer (how did that work out?) spent 200 Million Dollars and got less than 1% of the vote in Iowa, and only 3% of the Vote in New Hampshire. Could it be that something is just plain missing? Not easy to do what I did, is it?" Trump tweeted.

Steyer made a name for himself in recent years for being one of the earliest advocates for Trump's impeachment within months of his presidency.

The Trump reelection campaign also took a swipe at former Vice President Joe Biden, saying in an email to supporters: "Joe Biden Predicted He Would Win New Hampshire. He Just Got Beat Like a Drum -- Again. A crazy socialist and a former small-town mayor just crushed the former VP."

The campaign added: "Joe Biden repeatedly said he would win New Hampshire. In reality, he may finish in fifth place. And he's definitely not getting any delegates."

The president also took shots at Andrew Yang and Sen. Michael Bennet, D-Colo., both who dropped out of the race as the New Hampshire results were coming in.