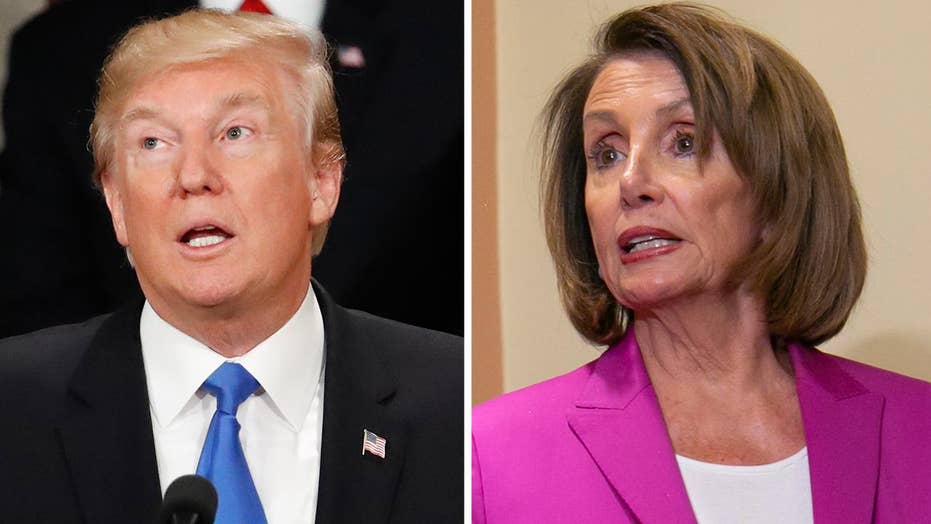 President Trump on Thursday abruptly denied military aircraft to House Speaker Nancy Pelosi for a foreign trip just minutes before the congressional delegation was set to depart, in a stunning decision that followed her call to delay the State of the Union address amid the government shutdown.

In a curt letter, Trump said her trip has been “postponed.”

Asked if lawmakers might still be able to find another way to travel overseas, a senior congressional official told Fox News Thursday evening only, "I don't know."

According to sources, the president pulled the plug on Pelosi's aircraft as she was about to leave for her overseas trip. Her congressional delegation's military aircraft was slated to depart at 3 p.m. ET.

An official said that “as soon as the president found out about the trip today, he took immediate action.” A source told Fox News that when moving to cancel Thursday's flight, the White House reasoned that the trip would keep Pelosi out of the country beyond next Tuesday night—when the next government pay period would occur.

"If she had gone on this trip she would have guaranteed that 800,000 federal workers would not receive their second paycheck because she would not have been here to negotiate any kind of deal," a senior White House official said Thursday.

But Pelosi's office fired back, with spokesman Drew Hammill saying the purpose was to meet with allies and "express appreciation & thanks to our men & women in uniform for their service & dedication" -- while noting there was no planned stop in Egypt.

"It is unbecoming of the president of the United States. But it is unfortunately a daily occurrence," he said.

Republicans had a split response over the president's decision.

"One sophomoric response does not deserve another. Speaker Pelosi’s threat to cancel the State of the Union is very irresponsible and blatantly political," he tweeted.

The president's move to cancel Pelosi's trip came after the House speaker's request to delay his annual State of the Union address -- though one White House official claimed the aircraft decision was not a "response" to Pelosi's letter.

The president has been slated to deliver his message to a Joint Session of Congress on Jan. 29, yet Pelosi on Wednesday urged the president to delay his delivery until the government re-opens, or deliver the address in writing.

The speaker stood by that call earlier Thursday.

“The date of the State of the Union is not a sacred date. It’s not constitutionally required. It’s not the president’s birthday. It’s just a date we agreed to,” Pelosi told reporters during a press conference on Capitol Hill Thursday. “That’s why I said to the president, if you don’t open up government, let’s discuss a mutually agreeable date.”

For more than 24 hours, Trump did not respond to Pelosi's request, even as fellow Republicans condemned her push for delay.

Congressional lawmakers, meanwhile, were left sitting on a bus waiting to see if they could depart. They included House Intelligence Committee Chairman Adam Schiff, D-Calif., and House Foreign Affairs Committee Chairman Eliot Engel, D-N.Y. Fox News is told Capitol Hill security officials got an emergency call from the Pentagon canceling the overseas trip due to the shutdown.

Amid mounting confusion, Fox News is told there were furious calls going back and forth among Capitol Hill, State, Pentagon and White House offices. The bus later returned to the Capitol, where members filed back into the building.

When asked for additional context about the congressional delegation and the apparent trip delay, White House Press Secretary Sarah Sanders reiterated that Pelosi could fly commercial: "The Department of Defense has to approve military air travel. As he made clear in the letter she can still go, she just has to travel commercial."

The rhetoric continues to show both sides of the standoff refusing to step off their positions that triggered the funding lapse shortly before the holidays last month.

Trump wants nearly $6 billion for a border wall, while Pelosi and fellow Democrats have described such a project as immoral. The two sides have been unable to strike a deal that both bridges their differences and re-opens a slew of shuttered agencies.

The shutdown, which is now the longest in U.S. history, has left more than 800,000 federal workers and contractors without pay. Some federal employees have been deemed essential to government function and are required to work without pay. Others have been furloughed, but still are left unpaid.