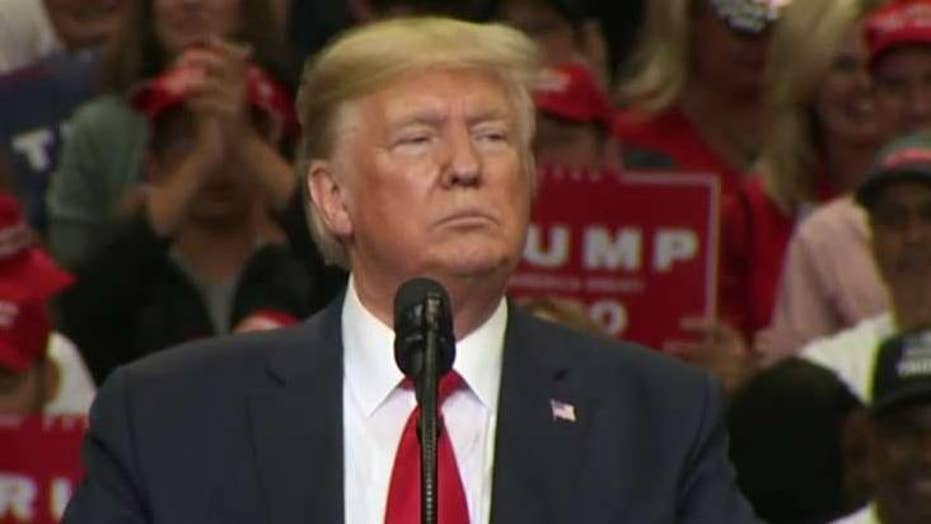 The president criticizes the 2020 Democratic candidate during rally in Dallas, Texas.

President Trump headlined a campaign rally on friendly turf in Dallas on Thursday, just hours after Energy Secretary and former Texas Gov. Rick Perry announced he would soon step aside amid scrutiny from House Democrats conducting an impeachment inquiry -- and a week after chaos and violence broke out at a Trump rally in Democratic-leaning Minnesota.

A massive crowd of approximately 30,000 gathered outside the American Airlines Center to watch the speech on a large screen, as the president launched into an extended critique of 2020 Democratic presidential candidates. He derided former Texas Rep. Beto O'Rourke as "very dumb" for pushing to confiscate guns and tax religious institutions, and remarked that Joe Biden's family overtly profited from his political career.

"Last week, a very dumb Democrat candidate for president -- that's the end of him in this state -- pledged to revoke the tax-exempt status of many churches and religious charities," Trump said, as boos rocked the arena. "And by the way, that was after, a few weeks ago, he said, 'Excuse me, we're gonna take your guns away.' ... The flailer. You remember he was flailing all over the place?"

It was a marked difference from the bedlam on the streets during Trump's speech last week in Minneapolis, when left-wing activists were recorded attacking Trump supporters on video. A Trump-supporting woman leaving that rally was hit in the face on camera. (Pro-Trump attendees also showed up in force in Minneapolis.)

A brief security episode as Trump spoke was quickly resolved. Dallas officers assigned to the rally said they were "made aware of an adult male wearing body armor" outside the arena, and that "officers located the individual observing that he was also armed." The man, who was licensed to carry a firearm, was transported to a local hospital for evaluation without incident, investigators said.

Meanwhile, after Trump tweeted a video showing long lines to enter the American Airlines Center just before he took the stage, actor Tom Arnold responded with an apparent threat: "Don't get too cocky traitor. They showed up for JFK too."

Inside the arena, Trump kept the focus on his presidential rivals, as well as the plummeting unemployment and poverty rates for various demographic groups.

While Democrats wanted to raise taxes, Trump said, Republicans "ended the war on a thing called American energy, which is very good for Texas. Since my election, natural gas production in Texas has increased by 35 percent, and oil production has increased by 60 percent. And the United States is now the number-one producer of oil and natural gas anywhere in the world!"

Trump added: "Yet every major Democratic candidate running for president wants to abolish all production of oil and natural gas. I think they want to go to windmills. 'Darling, I want to watch Trump tonight'; 'You can't, darling. The wind isn't blowing.' In other words, they want to annihilate our Texas economy."

The rally came at a critical time for Trump, whose dealings with the president of Ukraine have been the subject of a quickly unfolding impeachment inquiry run by House Democrats. Perry was subpoenaed earlier Thursday by House committees conducting the probe.

President Donald Trump taking the stage for the rally at American Airlines Arena in Dallas on Thursday. (AP Photo/Andrew Harnik)

Republicans have raised concerns that they might take a historic beating in Texas in 2020, as more suburban voters have balked at the president. Trump carried the longtime Republican stronghold and its 38 Electoral College votes by only 9 points in 2016 -- down from Mitt Romney's 15-point win in 2012.

Trump recounted his win in Texas during the rally, as well as his debate preparation in the primary against college debate champion and Texas GOP Sen. Ted Cruz.

"I hired a debate coach, and he lasted about 10 minutes -- I said, 'This guy knows less than I do.' He didn't know anything, it's true. He said, 'Never, ever interrupt if they're speaking.' I said, 'OK coach, put me in, coach.' I mean, you can't beat Ted Cruz if you don't interrupt him. It's impossible.

"I said, to my wife, first lady, potentially, I said, 'I got a problem,'" Trump recounted. "'Some of these guys are OK, they were only president of the class. ... I liked playing baseball better. But I said, Melania, and I called Ivanka, my kids -- I said, 'I got a problem. Ted Cruz was the national debate -- the number-one guy in college. He was the number-one guy in law school. How the hell do I beat a guy who's that good at debating?' But we came out OK, Ted. Ted was tough -- smart as hell, and tough."

In a shot at Democrats a day after their most recent presidential primary debate, Trump remarked, "In recent debates, you see these people up there, they're not Ted Cruz, believe me. Hey Ted, you should turn Democrat, you would win. Every single Democrat candidate for president raised their hands in favor of giving health care to all illegal aliens."

The White House has emphasized Democrats' historic leftward push, and Trump also hammered that theme at Thursday's rally -- saying Democrats wanted to "eviscerate" not only Medicare, but also babies just prior to their birth.

"They want to impose an extreme agenda," Trump said, referring to the field of Democrats seeking the White House. "They cannot pass it, and they cannot win it at the ballot box -- they're not going to win. They won't come close in 2020. They know it."

He continued: "They want to tear down symbols of faith and drive Christians and religious believers from the public square. They want to silence your voices on social media, and they want the government to censor, muzzle and shut down conservative voices -- you know that."

Democrats, though, have pointed to demographic trends as well as the fact that Cruz won reelection by just over 2 points last year as evidence that the second-most-populous state could soon be in play.

The line to enter the campaign rally for President Trump forming outside the American Airlines Center on Thursday in Dallas. (AP Photo/Jeffrey McWhorter)

“I expect President Trump to win Texas by 5 percentage points, not 9 points this time,” Southern Methodist University political science professor Cal Jillson told Politico. “There are long-term demographic changes taking place in the state that eat into Republican support. The major cities like Austin, Houston and Dallas are already leaning blue. Plus, his Republican coalition has been destabilized by his own actions and conduct."

WHY IS RICK PERRY STEPPING DOWN?

The RNC raised a record-setting $27.3 million just last month and had $59.2 million cash as of the end of August, amid the impeachment push against the president  -- which has fueled GOP campaign contributions heading into the 2020 election.

This cycle, to date, the RNC has more than doubled the DNC's fundraising efforts, according to the GOP, which also noted that the Democrats, as of last month, carried $7.3 million in debt.

The campaign continued to haul in cash Thursday. Trump began his trip at a fundraiser in Fort Worth that raised about $5.5 million for Trump Victory, a joint fundraising committee benefiting the Trump campaign and the Republican National Committee. Looking to promote new jobs, Trump then toured the recently built Louis Vuitton plant in Alvarado with his daughter and senior adviser Ivanka Trump.

"I've seen that before," Trump told his tour guides while pointing to one of the iconic bags set up on a table.

DEMS STORM OUT OF WHITE HOUSE MEETING WITH TRUMP, SAY HE CALLED PELOSI A 'NASTY' NAME AND DECLARED, 'I HATE ISIS MORE THAN YOU!'

While Republicans largely have defended Trump, they have sounded alarms over his decision to pull U.S. troops out of northern Syria — a move that paved the way for Turkey to invade and assault the Kurds, who'd fought alongside the U.S. in its campaign against Islamic State militants.

Upon landing in Texas on Thursday, Trump credited his threat of sanctions on Turkey and the violence that has unfolded for the announcement of a cease-fire, though critics said Trump green-lit the incursion and put the Kurdish forces in danger by announcing a U.S. troop withdrawal.

A sea of red hats as supporters of President Trump lined up to enter the campaign rally on Thursday in Dallas. (AP Photo/Jeffrey McWhorter)

Trump described the cease-fire as an "incredible outcome" that could not have occurred "unless you went somewhat unconventional."

A White House meeting between Trump and congressional lawmakers to discuss the situation Wednesday devolved into an insult-fest, with the president calling House Speaker Nancy Pelosi, D-Calif., a "third-grade politician," and Pelosi and other top Democrats storming out.

A senior aide for the Democrats told Fox News that Trump began the meeting, which ostensibly had been called by the White House, by remarking that "someone wanted this meeting so I agreed to it." Trump also was said to have told Pelosi, "I hate ISIS more than you do," prompting Pelosi to respond, "You don't know that."

Trump and Pelosi continued to trade jabs after the meeting, with each accusing the other of having a meltdown.