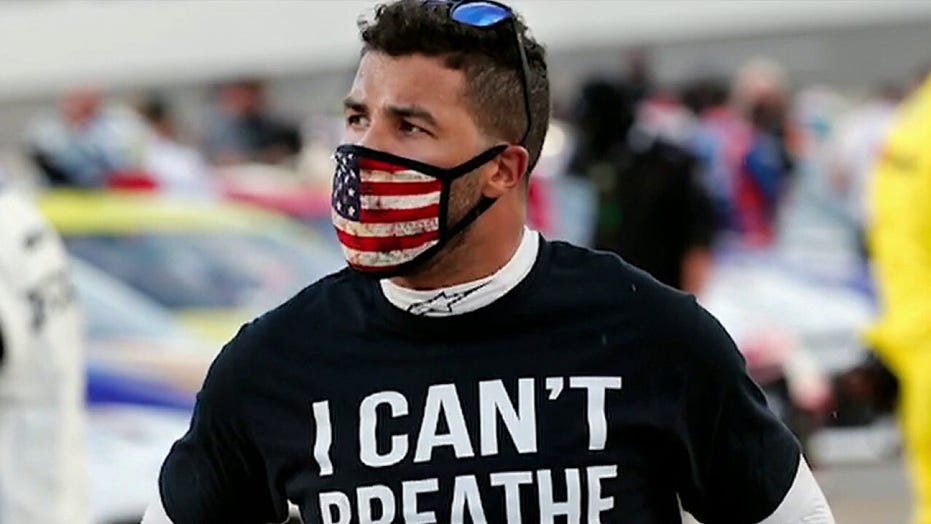 Howard Kurtz on Bubba Wallace fallout: NASCAR 'raced to judgment,' they are the culprit

President Trump on Monday lashed out at NASCAR and questioned why Bubba Wallace, the auto racing company's only Black driver, hasn't apologized after the highly publicized investigation over a rope found in his garage that, Trump claimed, turned out to be a hoax.

“Has @BubbaWallace apologized to all of those great NASCAR drivers & officials who came to his aid, stood by his side, & were willing to sacrifice everything for him, only to find out that the whole thing was just another HOAX?” Trump wrote on Twitter Monday morning. “That & Flag decision has caused lowest ratings EVER!”

Wallace responded with a statement on Twitter to "the next generation and little ones following my footsteps."

"Your words and actions will always be held to a higher standard than others. You have to be prepared for that," Wallace wrote.

"Always deal with hate being thrown at you with LOVE! Love over hate every day. Love should come naturally as people are TAUGHT to hate. Even when it's HATE from POTUS.. Love wins," he concluded.

The incident last month at the Talladega SuperSpeedway involving the rope in his garage appeared to be the result of a misunderstanding and not an intentional effort to put a noose in his area. Wallace himself had never seen the rope — it was reported by another NASCAR employee.

After the FBI went to inspect the situation, the bureau determined it was a garage door pull rope and had been hanging in the garage assigned to Wallace since at least October, when no one could’ve known Wallace’s team would be assigned to it.

NASCAR President Steve Phelps said this photo of the 'noose' was taken by NASCAR security. (NASCAR)

But before it was determined to be a pull rope, the entire NASCAR family showed its support for Wallace, with all of his fellow drivers and their crews standing behind him in pit lane before the Geico 500.

BUBBA WALLACE'S GIRLFRIEND 'SO THANKFUL' THAT 'NOOSE' WASN'T DIRECTED AT HIM

Wallace was initially defiant over the FBI’s findings, before accepting their determination and saying he was “relieved” the noose-styled rope had not been targeted at him.

Shortly after the FBI’s determination, Wallace told CNN’s Don Lemon the rope was a “straight-up noose” and he had never seen anything like it.

The following day, Wallace tweeted a statement of a different tone. “First off, I want to say how relieved I am that the investigation revealed that this wasn’t what we feared it was, I want to thank my team, NASCAR and the FBI for acting swiftly and treating this as a real threat,” Wallace wrote. “I think we’ll gladly take a little embarrassment over what the alternatives could have been,” he added.

Even some usual Republican allies pushed back against Trump's tweet.

“I don’t think Bubba Wallace has anything to apologize for,” South Carolina Sen. Lindsey Graham said on Fox News’ Brian Kilmeade’s radio show on Monday. “You saw the best in NASCAR. When there was a chance that it was a threat against Bubba Wallace, [they] all rallied to Bubba’s side. I would be looking to celebrate that kind of attitude more than being worried about it being a hoax.”

White House press secretary Kayleigh McEnany defended the president’s remarks on Fox News Monday morning: “The president’s merely pointing out that we’ve got to let facts come out before we jump to judgment."

Wallace, an Alabama native, has taken an active role in the push against racial injustice. He has worn a shirt saying “I Can’t Breathe,” raced with a Black Lives Matter paint scheme in Virginia and successfully lobbied for NASCAR’s Confederate flag ban.

For more than 70 years, the flag was a common and complicated sight at NASCAR races. The series first tried to ban the Confederate flag five years ago but did nothing to enforce the order.