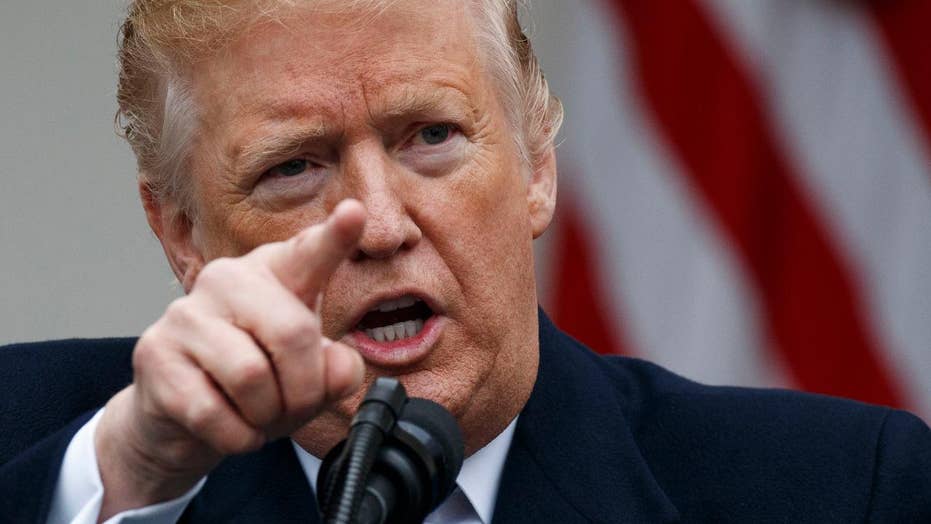 What would happen if President Trump declared the border crisis a national emergency? It’s one option he is considering.

Reuters White House correspondent Jeff Mason says Trump could go around Congress to build a wall along the southern border.

President Trump renewed his fiery criticism of the media Monday amid a barrage of tough coverage over the partial government shutdown and more, calling them "the real Opposition Party" and "the Enemy of the people" in a Twitter tear.

“With all of the success that our Country is having, including the just-released jobs numbers which are off the charts, the Fake News & totally dishonest Media concerning me and my presidency has never been worse,” Trump tweeted. “Many have become crazed lunatics who have given up on the TRUTH!”

Minutes later, he continued: “The Fake News will knowingly lie and demean in order [to] make the tremendous success of the Trump Administration, and me, look as bad as possible. They sue non-existent sources & write stories that are total fiction. Our Country is doing so well, yet this is a sad day in America!”

“The Fake News Media in our Country is the real Opposition Party. It is truly the Enemy of the People! We must bring honesty back to journalism and reporting!” Trump added.

It is unclear what specific news article or broadcast prompted the president’s social media ire -- but the tweets are likely related to news coverage of the now-17-day partial government shutdown, as well as Syria. The president said last week that he was willing to keep the shutdown going for as long as necessary in order to negotiate with Democrats for funding for a border wall along the U.S.-Mexico border. Democrats have vowed to block funding for the long-promised barrier.

The White House did not immediately respond to Fox News' request for comment on what sparked the president's anti-media tweets.

Later, Trump complained about a story in The New York Times on his decision to remove U.S. troops from Syria.

"The Failing New York Times has knowingly written a very inaccurate story on my intentions on Syria. No different from my original statements, we will be leaving at a proper pace while at the same time continuing to fight ISIS and doing all else that is prudent and necessary!" Trump tweeted Monday.

The president’s tone in his Monday tweets is consistent with past attacks on the media. Trump has repeatedly, throughout his 2016 presidential campaign and the first two years of his administration, accused journalists and major mainstream news organizations of being “fake news” and “dishonest,” even as he gives interviews to some of those same publications.

In August, more than 300 publications across the country participated in an effort, initially organized by The Boston Globe, publishing editorials promoting freedom of the press. The Globe’s piece was titled “JOURNALISTS ARE NOT THE ENEMY,” and said that replacing “a free media with a state-run media” is the “first order of business for any corrupt regime taking over a country.”