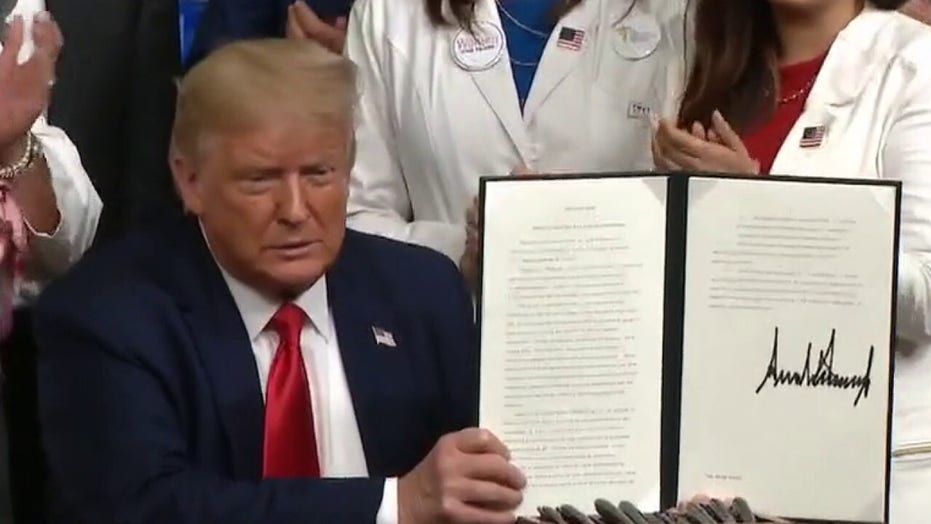 President Trump on Tuesday slammed "false" ads from the pharmaceutical industry following his executive order to lower prescription drug prices last month, saying he is "the first" president to "take them on."

“Big Pharma is taking ads against me because I am MASSIVELY lowering your drug prices, which is obviously not good for them,” Trump tweeted Tuesday. “Medicare premiums will also be going down.”

He added: “I am the first President to take them on. Don’t fall for their false ads. Biden plan is for very big increases!”

Trade group PhRMA responded to the president’s tweet Tuesday morning, saying they "remain willing to speak with the administration and discuss ways to lower costs for patients at the pharmacy counter."

“However, we remain steadfastly opposed to policies that would allow foreign governments to set prices for medicines in the United States,” the trade association said in a statement.

PhRMA was referring to a component of one of the president’s executive orders, known as the “favored nations” policy, which would require Medicare to purchase drugs at the same prices paid by foreign countries, which the president said would prevent the U.S. from continuing to subsidize the cost of research and development for the entire world.

Medicare would leverage its purchasing power to negotiate prices, and the goal would be to find a middle ground with other countries that allegedly pay less for the same prescription drugs.

That order is not expected to be signed until the end of August, giving pharmaceutical companies the opportunity to come up with alternative programs.

In addition, the president signed three executive orders last month, which he said would “lead to a massive reduction in drug costs,” including one that would deliver rebates from drug companies directly to patients for insulin and Epipens and another that would bypass pharmacy benefit managers and other “middlemen” to deliver discounts for prescription drugs directly to patients.

"Right now our industry’s sole focus is figuring out a way to beat COVID-19," a PhRMA spokesperson said in a statement last month. "However, we remain steadfastly opposed to policies that would allow foreign governments to set prices for medicines in the United States."