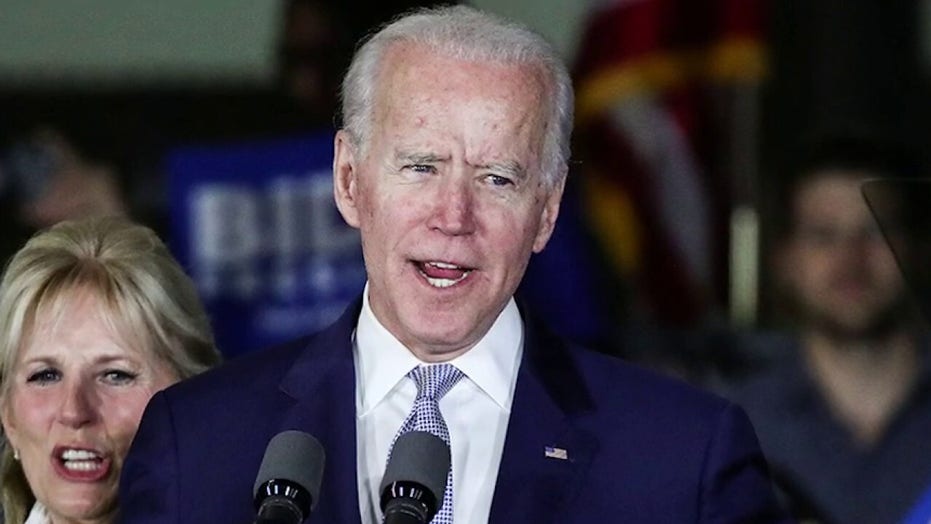 Biden campaign to target President Trump's handling of the economy

President Trump and his Democratic challenger Joe Biden each marked the grim milestone of coronavirus pandemic deaths reaching 100,000 in the U.S. — but the timing of their comments and the forum they each used to release their messages were different.

“For all of you who are hurting so badly, I’m so sorry for your loss,” the former vice president said Wednesday evening soon after the nation’s death toll from the coronavirus topped 100,000. “This nation grieves with you. Take some solace from the fact we all grieve with you.”

“There are moments in our history so grim, so heart-rending, that they’re forever fixed in each of our hearts as shared grief. Today is one of those moments,” Biden added in a video that his campaign released on Facebook and Twitter.

The president referred to the coronavirus death toll on Thursday morning — when he took to Twitter to write, “We have just reached a very sad milestone with the coronavirus pandemic deaths reaching 100,000.”

“To all of the families & friends of those who have passed, I want to extend my heartfelt sympathy & love for everything that these great people stood for & represent. God be with you!”

The pandemic and the economic consequences from shutting down much of the nation to prevent the spread of the virus have become the top issues in the race for the White House. The presumptive Democratic presidential nominee, his campaign, and allied groups have repeatedly blasted Trump, charging that he initially downplayed the severity of the outbreak and that he fumbled the federal response to the pandemic.

In his video address Wednesday evening, Biden argued that the death toll milestone “could have been avoided,” as he referenced a Columbia University study that indicated earlier action on social distancing could have saved 36,000 lives.

The president has slammed the study, saying in an interview last week that “Columbia is a liberal, disgraceful institution to write that because all the people that they cater to were months after me, they said we shouldn't close it."

Defending his record, Trump has repeatedly pointed to his ban on non-U.S. citizens from flying from China to the U.S., which was implemented on Feb. 2.

“I stopped people from China very early – very, very early – from coming into our country,” the president said on April 4.

But as late as March 9, Trump emphasized that “nothing is shut down, life & the economy go on.”

Four days later he declared the coronavirus a national emergency and in the following days urged Americans to limit travel and stay home to prevent the spread of the virus.

In April, Trump praised his administration’s actions, declaring that “everything we did was right” as he slammed media reports that his administration had failed to adequately ramp up testing and production of medical supplies to those on the front lines fighting the outbreak.

FOX NEWS POLL: BIDEN LEADS ON CORONAVIRUS, BUT TRUMP HAS EDGE ON ECONOMY

The death toll milestone comes as a majority of states are beginning to reopen their economies. The president has repeatedly pushed for a speedy economic recovery and he has charged that it’s because of "political purposes" that Democratic governors are “moving slowly” in loosening restrictions and reopening businesses shuttered during the pandemic.

A Fox News national poll conducted last week showed that Biden had a 9-point lead on Trump when it came to handling the coronavirus, with the president holding a 3-point edge over his Democratic challenger on dealing with the economy. That same poll also indicated Biden topping Trump 48-40 percent in a general election matchup.