President Trump attended the 120th Army-Navy football game in Philadelphia on Saturday for the third time, where he told players they can play professional football after graduation under a new waiver for service academy athletes.

Trump stopped at the locker rooms of both the Army Black Knights, who were 5-7 heading into the game, and the Navy Midshipmen, with a record of 9-2, to wish the teams good luck and announce that their service could be delayed to play in the NFL. 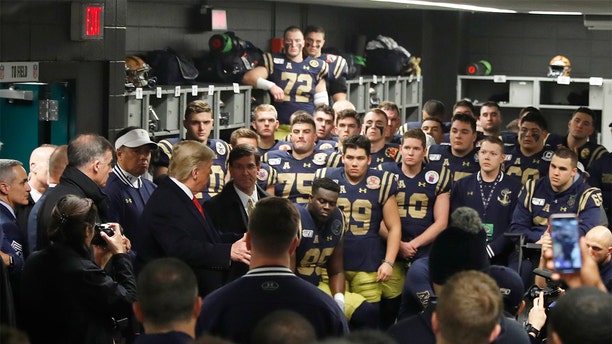 Trump was flanked by Defense Secretary Mark Esper, who confirmed that players from the service academies will have a waiver from their duties if they go on to play professional sports. 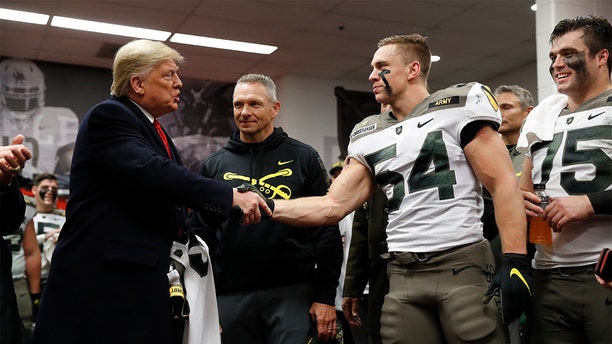 The president also participated in the coin toss before the start of the game. 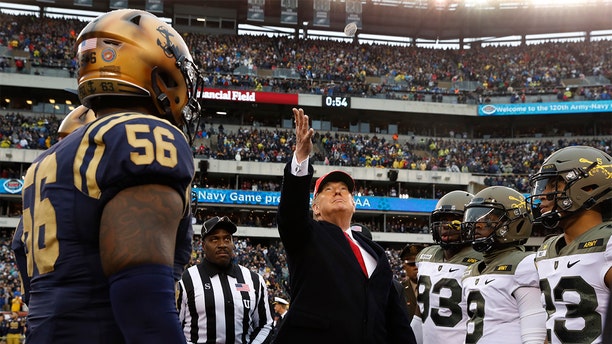 A day after the House Judiciary Committee voted to advance two articles of impeachment against Trump, the president gave the teams a pep talk before the game and participated in the opening ceremonies at Lincoln Financial Field. He wore his signature red Keep America Great cap on the rainy field and got a warm welcome from the crowd.

Crowds broke out into chants of "Trump" and "commander in chief" at various points of the game. Not to show any bias, Trump started the game on the Army side of the field, sitting with Esper, Army Secretary Ryan McCarthy and Chairman of the Joint Chiefs of Staff Mark Milley.

Then at halftime, Trump crossed the field to the Navy side and was met with more cheers. He was joined by Acting Secretary of Navy Thomas Modly and Superintendent of the Naval Academy Vice Adm. Sean Buck. Trump and the crowds looked up to admire five Black Hawk helicopters that flew over the stadium.

Navy parachuters presented Trump with the game ball. He left the game to chants of  "We love you!"

The football tradition was a respite from the simmering tensions in Washington over Trump's expected impeachment next week by House Democrats.

Trump didn’t address reporters at the White House before departing, as weather forced the president to motorcade to Air Force One rather than take the helicopter and gaggle with reporters on the White House South Lawn.

Trump attended the annual rivalry game last year and as president-elect in 2016.

Saturday’s game marks the 120th time the U.S. Military Academy at West Point, in New York, and United States Naval Academy in Annapolis, Md., have played each other in the historic football rivarly.

Also in attendance on Saturday was Sully, the famous service dog of the late President George H.W. Bush.