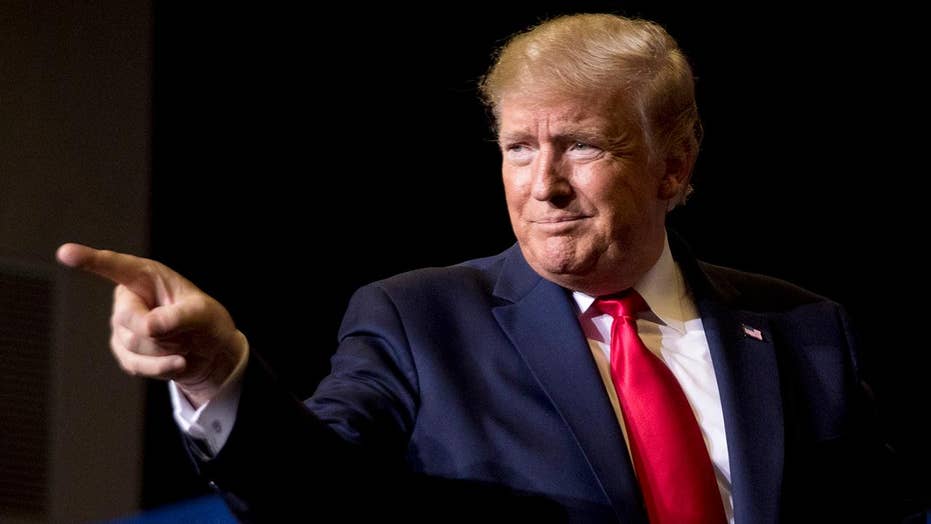 President Trump rallied supporters in Tupelo, Miss., on Friday night in a bid to shore up Republican support ahead of the state's tightest gubernatorial race in nearly a generation.

"The press protects him," said the president, who also called Biden "One Percent Joe."

Trump also slammed the Democratic-led impeachment inquiry, calling it a "preposterous hoax" one day after the House voted to formalize the rules of their impeachment process, and accused Democrats of trying to "delegitimatize" the 2016 presidential election.

House committees have held nearly a dozen closed-door depositions from witnesses regarding their knowledge of a July 25 phone call between Trump and Ukrainian President Volodymyr Zelensky. An anonymous intelligence community whistleblower has alleged that Trump sought to persuade Zelensky to open an investigation into Joe Biden, his son Hunter and their business dealings in Ukraine in exchange for military aid to the Eastern European nation.

"Do you think I would say something improper when I know there are so many people listening?" Trump asked the crowd.

Trump called O'Rourke a "poor bastard" and a "poor pathetic guy" who "made a total fool of himself" in the race for the White House.

"Hopefully, we won't be hearing about him for a long time," Trump added.

"Hopefully, we won't be hearing about him for a long time."

Trump also decried Hillary Clinton's recent comments about Rep. Tulsi Gabbard, D-Hawaii. The former secretary of state didn't mention Gabbard by name, but suggested that Gabbard was being groomed to be a third-party presidential candidate in 2020.

Trump said, "I don't know who Tulsi Gabbard is but I know one thing, she's not an agent for Russia."

Clinton made similar comments about 2016 Green Party candidate Jill Stein, to which Trump responded: "I don't know Jill Stein ... I know she's not an agent of Russia."

The president opened his remarks at Bancorp South Arena by celebrating the U.S. military raid that led to the death of Islamic State (ISIS) leader Abu Bakr al-Baghdadi, saying it had "ended his wretched life and punched out his ticket to hell."

"We have a great military. It was very very depleted when I came into office ... but it ain't depleted anymore," said Trump, who called Baghdadi "a savage and soulless monster but his reign of terror is over."

Trump lamented the media's coverage of the military's most recent feat, saying that if former President Barack Obama had killed the leader of ISIS, the media would have the story "going on for another seven months."

"Conan the dog got more publicity than me -- and I'm very happy about it," Trump said of the heroic military dog who was injured while pursuing Baghdadi through a tunnel underneath a compound in northwestern Syria.

"Conan the dog got more publicity than me -- and I'm very happy about it."

Hundreds of people had waited to see Trump at the rally to support Republican gubernatorial candidate Tate Reeves, who is finishing his second term as Mississippi's lieutenant governor after previously serving two terms as the elected state treasurer.

Reeves briefly joined Trump onstage and accused the "radical liberals" of "disrespecting" Trump by pursuing impeachment against him and urged the crowd to elect "an ally to Donald J. Trump."

"He'll never let you down," Trump said of Reeves. "And don't kid yourself, your Second Amendment is under attack."

Reeves has spent $10.8 million in the race to succeed term-limited Gov. Phil Bryant, while his Democratic opponent, state attorney general Jim Hood, has spent $5.2 million. Both are receiving financial support from national governors' groups in their parties.

Reeves has sought to tie Hood as closely as possible to national Democrats, such as House Speaker Nancy Pelosi, who are deeply unpopular in a state that voted heavily for Trump in the last presidential election.

Hood has not invited national Democratic figures to Mississippi and is running campaign commercials that show him with his family, his pickup truck and his hunting dog, Buck. In one, Hood unpacks a rifle and says that "Tate Reeves and his out-of-state corporate masters" are spending money on a "bunch of lies."

"You all know me. I've worked for you for years. I do my job and I'm a straight shooter," Hood says. The spot ends with Hood shooting the gun and shattering a bottle.

Hood is also running radio ads designed to appeal to African American voters — including one with an endorsement from former U.S. Rep. Mike Espy, who ran a strong but ultimately unsuccessful race for U.S. Senate in Mississippi last year, and another that mentions Hood leading the successful 2005 prosecution of Ku Klux Klan leader Edgar Ray Killen in the 1964 murder of three civil rights workers.

The outreach reflects the importance of black voters to any possible Hood victory. African Americans make up 38 percent of the state's population, but some say they're irritated by Hood's emphasis on courting rural white voters.