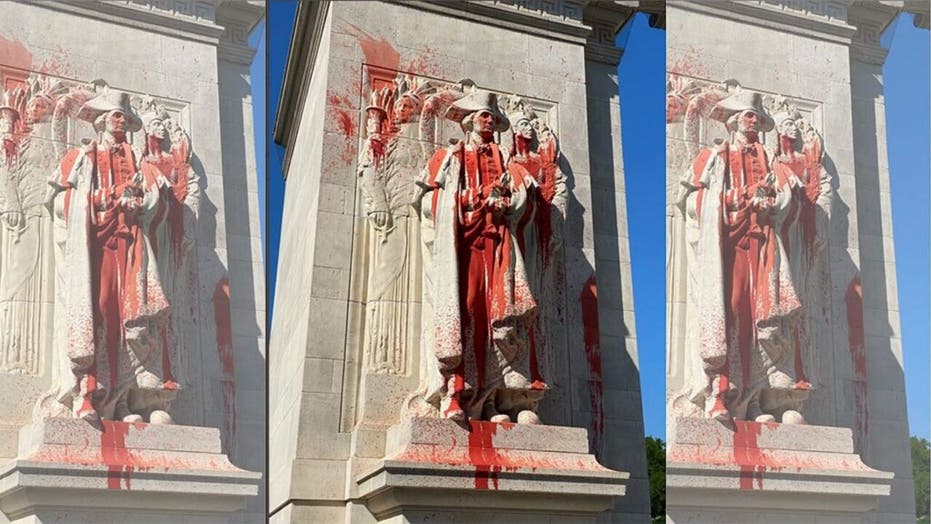 President Trump said the government is ‘tracking down’ the ‘two anarchist’ who are responsible for vandalizing a statue of George Washington in Washington Square Park.

“We are tracking down the two Anarchists who threw paint on the magnificent George Washington Statue in Manhattan. We have them on tape,” Trump wrote on Twitter. “They will be prosecuted and face 10 years in Prison based on the Monuments and Statues Act. Turn yourselves in now!”

The two suspects, one man and one woman, were caught on tape fleeing on bikes after defacing the statues. They also used white spray paint to draw outlines of 24 bodies around the park’s fountain, with red paint balloons on the heads to make them appear as if they’d been shot, according to the New York Post.

NYPD officers took away a cooler, which had been used to carry the balloons, and other evidence left behind at the scene to check for fingerprints.

The city parks department scrubbed away at the arch. “This does do damage — you can see bits of the statue all over me,’’ a worker told the Post as he went through a third round of cleaning the structure with a citrus-based solution and a powerwasher.

Last week, someone painted “slave owner” on a statue of Washington in Manhattan’s Union Square Park.

In the wake of nationwide protests following the death of George Floyd, protesters have moved beyond the destruction of Confederate statues to those of Founding Fathers, many of whom owned slaves or garnered criticism for their treatment of Native Americans, and even some statues of prominent abolitionists.

Trump has gone to battle for the statues, repeatedly threatening vandals with long prison sentences and last week signing an executive order to protect monuments.

The new order is meant to enforce laws prohibiting the desecration of public monuments, the vandalism of government property, and recent acts of violence. It withholds federal support tied to public spaces from state and local governments that have failed to protect public monuments, and withdraws federal grants for jurisdictions and law enforcement agencies that fail to stop their desecration.