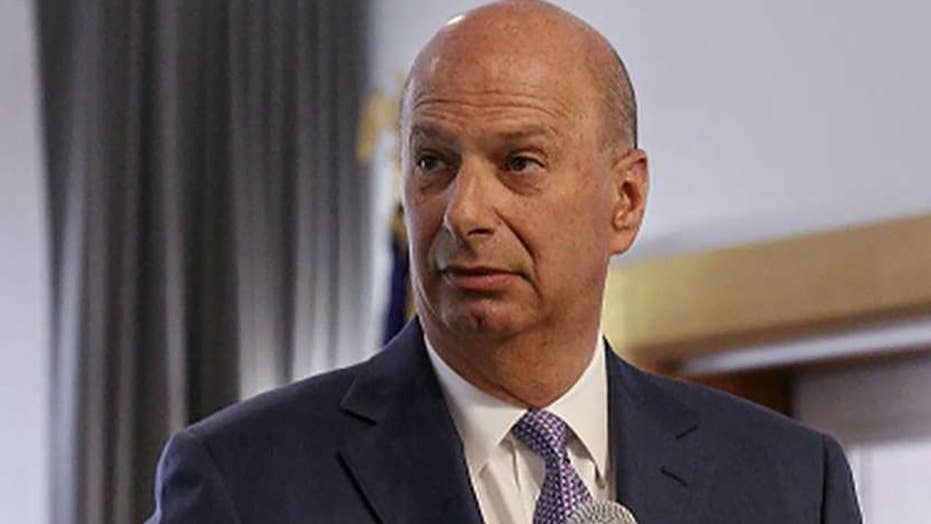 The Trump administration ordered the U.S. ambassador to the European Union not to appear at a scheduled Tuesday deposition on the Ukraine controversy, triggering a fiery new clash with House Democrats amid their impeachment inquiry.

President Trump dismissed the deposition as a "kangaroo court" as he defended the decision to block Gordon Sondland from appearing at the closed-door session on Capitol Hill.

But the move, first reported by the New York Times, prompted new warnings from Democrats that such acts will be seen as an obstruction of their investigation into the controversy surrounding Trump’s July 25 phone call with Ukrainian President Volodymyr Zelensky.

Schiff and other top Democratic committee chairmen later released a statement saying they indeed consider the administration’s “interference” to be “obstruction of the impeachment inquiry” and they plan to subpoena Sondland “for both his testimony and documents.”

The statement said they learned Tuesday morning from Sondland’s attorneys that the State Department left a voicemail at 12:30 a.m. telling them he could not appear. Further, they said the attorneys reported that Sondland turned communications sought by the committees over to the department, which “is withholding them from the Committees, in defiance of our subpoena to Secretary [Mike] Pompeo.”

An attorney for Sondland also said in a statement that the order not to appear came from the State Department. Attorney Robert Luskin said Sondland, who had agreed to appear voluntarily for the closed session, is required to follow the department's direction. No reason for the direction was cited, he said.

Luskin said Sondland "is profoundly disappointed that he will not be able to testify." His statement said: "Ambassador Sondland hopes that the issues raised by the State Department that preclude his testimony will be resolved promptly.  He stands ready to testify on short notice, whenever he is permitted to appear."

Trump tweeted that while he would "love" to send Sondland to testify, he "would be testifying before a totally compromised kangaroo court, where Republican’s rights have been taken away, and true facts are not allowed out for the public to see."

In the July phone call, which was flagged as part of a whistleblower complaint, Trump urged Zelensky to look into possible interference by Ukraine in the 2016 election as well as former Vice President Joe Biden and his son Hunter’s conduct in the country.

Democrats claim that Trump used $400 million in military aid as leverage in a quid pro quo for the Ukrainians to investigate a political opponent, and opened an impeachment inquiry, firing off a raft of subpoenas within a few days to top administration and White House officials. While a call transcript shows the president urging a Biden-related investigation, Trump denies any 'quid pro quo' claims.

According to a source familiar with the conversation, Sondland called Trump after Taylor texted him about the possibility that aid to Ukraine was being witheld for political reasons.

The source told Fox News that Sondland thought putting aid on hold was a bad idea, and that he then decided to ask Trump directly -- asking him: “What do do you want?” The source says Trump responded that he didn’t “want” anything and that there was no quid pro quo.

The decision to block Sondland's appearance comes as Democrats have been pushing forward with their inquiry. On Monday, House Democrats issued a fresh round of subpoenas to the Pentagon and the White House Office of Management and Budget for documents relating to reports that Trump ordered then-acting OMB Chief Mick Mulvaney to freeze aid to Ukraine.

On Saturday, Secretary of State Mike Pompeo reiterated prior statements that he would oppose any "harassment" of department employees by Congress.

One U.S. government official told Fox News regarding the directive blocking Sondland that the view at the State Department and White House is that House Democrats are not playing by the rules, suggesting the administration will cooperate in the investigation once they do.

And Rep. Jim Jordan, R-Ohio, cited the publication of the text messages in defending the administration's decision.

"If you're going to selectively leak text messages ... and not give full context and not give the full transcript, we understand why they made the decision at this moment," he said.