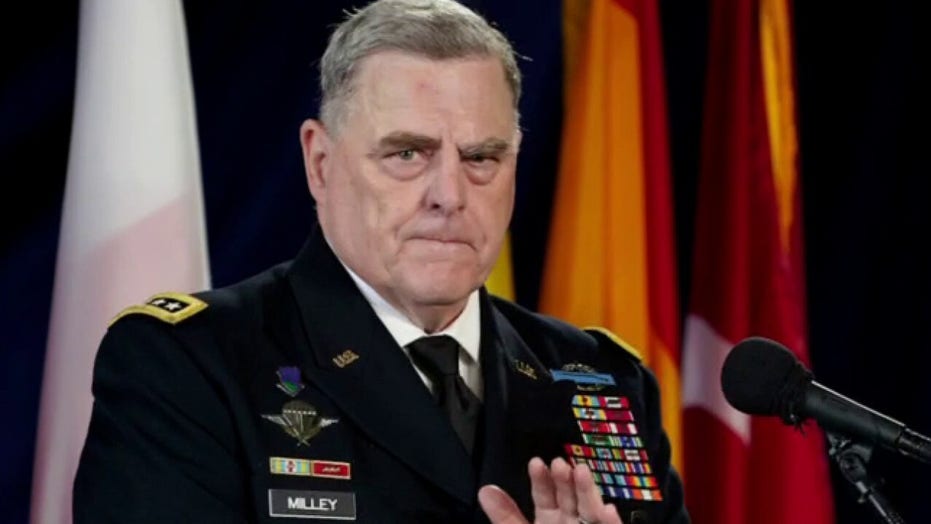 Kayleigh McEnany: Gen. Milley 'aided and abetted' the enemy if he back-channeled China

EXCLUSIVE: Former acting Secretary of Defense Christopher Miller, who led the Pentagon from the period after the 2020 election through Inauguration Day, said that he "did not and would not ever authorize" Chairman of the Joint Chiefs of Staff Gen. Mark Milley to have "secret" calls with his Chinese counterpart, describing the allegations as a "disgraceful and unprecedented act of insubordination," and calling on him to resign "immediately."

In a statement to Fox News, Miller said that the United States Armed Forces, from its inception, has "operated under the inviolable principle of civilian control of the military."

"The Chairman of the Joint Chiefs of Staff is the highest-ranking military officer whose sole role is providing military-specific advice to the president, and by law is prohibited from exercising executive authority to command forces," Miller said. "The chain of command runs from the President to the Secretary of Defense, not through the Chairman."

Miller went on to reference the allegations, which are included in the book "Peril," co-written by Washington Post reporters Bob Woodward and Robert Costa, that Milley made two secret phone calls, both to his Chinese counterpart, Gen. Li Zuocheng of the People’s Liberation Army. The book alleges that the phone calls took place prior to the 2020 presidential election, on Oct. 30, 2020, and then two days after the Jan. 6 Capitol riot, on Jan. 8, 2021.

The book claims Milley contacted Li after he had reviewed intelligence that suggested Chinese officials believed the United States was planning an attack on China amid military exercises in the South China Sea. The authors of the book also claim Milley contacted Li a second time to reassure him that the U.S. would not make any type of advances or attack China in any form, as Milley promised, "We are 100% steady. Everything’s fine. But democracy can be sloppy sometimes."

But Fox News spoke with multiple individuals who were in the room during the two phone calls Milley had with Li. The calls, in October, were coordinated with then-Defense Secretary Mark Esper’s office.

"They were not secret," a U.S. official told Fox News about the calls, which took place over video teleconference.

Fox News has learned there were about 15 people present for the calls. Sources told Fox News that there were multiple notetakers present, and said the calls were both conducted with full knowledge of then-Defense Secretary Mark Esper and then-acting Defense Secretary Chris Miller – something Miller denied.

"If the reporting in Woodward’s book is accurate, it represents a disgraceful and unprecedented act of insubordination by the Nation’s top military officer," Miller said, adding that if the story of Milley’s "histrionic outbursts and unsanctioned, anti-Constitutional involvement in foreign policy prove true, he must resign immediately or be fired by the Secretary of Defense to guarantee the sanctity of the officer corps."

"Pursuit of partisan politics and individual self-interests are a violation of an officer’s sacred duty and have no place in the United States military," Miller said, adding that "a lesser ranking officer accused of such behavior would immediately be relieved of duty pending a thorough and independent investigation."

"As secretary of defense, I did not and would not ever authorize such conduct," Miller said.

Miller went on to explain that "the reason" he agreed to serve as former President Trump’s Secretary of Defense was "because of his commitment to our service members, veterans and their families and his focus on ending our involvement in overseas operations that lacked strategic coherence."

"Any accusations that President Trump was intent on starting a war with China are completely unfounded," Miller said. "President Trump absolutely believed and advocated for a more aggressive approach to China, but he was elected to end our Nation’s wars, not start new ones.  I was proud to play a small role in achieving those goals."

Miller added: "I look forward to a full, non-partisan investigation of the accusations made by Woodward to guarantee that the genius of our Founders and following generations that established a system and culture of the subservience of our military – the most powerful force in our Nation – to civilian control endures."

And former chief of staff for the Department of Defense Kash Patel told Fox News that "the law governing the Joint Chiefs of Staff specifically forbids the chairman from exercising any operational command authority."

"Congress put this in the statute because the U.S. military is to be led by a civilian, the commander-in-chief," Patel continued. "Furthermore, by law, the national command authority goes from the president to the secretary of Defense to include anything relating troop deployments, operations in theaters of war, and nuclear command."

MILLEY CALLS WITH CHINESE COUNTERPART 'WERE NOT SECRET': US OFFICIALS

Patel added that if the calls with China are true, Milley "has violated the law regarding operational authority."

"Calling a foreign counterpart and discussing operational capabilities against that enemy is literally treasonous," Patel said. "The White House, nor the Office of the Secretary of Defense authorized the chairman to conduct any calls with Chinese officials regarding operations."

And deputy chief of staff to the Department of Defense Joe Francescon also told Fox News that it was "the policy at the time that there was no senior government engagement with China, owing to their bad acts and efforts."

Francescon added that it was the "blanket policy at the time not to have high-level engagement with the Chinese on matters like this," and added that Miller and his office were "not told in advance of any call to the Chinese specifically."

"At most, they were presented that Milley was calling foreign allies and partners to reassure them," he said.

But spokesman for the Joint Chiefs of Staff, Col. Dave Butler is defending allegations of "secret" calls with his Chinese counterpart, saying the conversations are "vital" to "reducing tensions" and "avoiding unintended consequences or conflict," maintaining that the calls were coordinated with high-level defense officials.

"The Chairman of the Joint Chiefs regularly communicates with Chiefs of Defense across the world, including with China and Russia. These conversations remain vital to improving mutual understanding of U.S. national security interests, reducing tensions, providing clarity and avoiding unintended consequences or conflict," Milley spokesman Col. Dave Butler said in a statement Wednesday.

Butler said that Milley's calls "with the Chinese and others in October and January were in keeping with these duties and responsibilities conveying reassurance in order to maintain strategic stability."

"All calls from the Chairman to his counterparts, including those reported, are staffed, coordinated and communicated with the Department of Defense and the interagency," Butler said.

"Also in keeping with his responsibilities as senior military advisor to the President and Secretary of Defense, General Milley frequently conducts meetings with uniformed leaders across the Services to ensure all leaders are aware of current issues," Butler continued. "The meeting regarding nuclear weapons protocols was to remind uniformed leaders in the Pentagon of the long-established and robust procedures in light of media reporting on the subject."

Butler added: "General Milley continues to act and advise within his authority in the lawful tradition of civilian control of the military and his oath to the Constitution."

Meanwhile, a U.S. official who spoke on the condition of anonymity, maintained that Milley routinely calls his Chinese and Russian counterparts, and explained that he has been speaking to Li for about five years. The source said this is normal for the chairman of the Joint Chiefs of Staff.

According to the official, there was full civilian oversight of the phone calls, including a representative of the State Department and Milley’s political adviser. Notes of the calls were taken and a summary note was sent to the Defense secretary and the intelligence community, the official said.

"This was not done like some sort of conspiratorial thing," another participant who overheard the conversation told Fox News.

According to those familiar, the October phone call had several topics, one of which focused on the election. The Chinese, according to the sources, were concerned about, what they saw as, instability in the U.S. system. Milley, according to a source, reassured his counterpart that the U.S. is a stable democracy.

Another source said the call was in the context of assuring adversaries that the United States were not planning any military action.

Fox News has learned that Milley had up to 20 phone calls with Li and NATO allies in the wake of the Jan. 6 riot in an effort to reassure them that the U.S. government was stable, and to reassure China that the U.S. did not plan a surprise attack – all in an effort to lower tensions with China during the interim period between the election and inauguration, and to project stability so that adversaries of the U.S. did not take advantage of the domestic turmoil during that period.

The White House is also defending Milley, with White House press secretary Jen Psaki saying the President "has worked side-by-side with Chairman Milley for almost eight months as the chairman of the Joint Chiefs has experienced with him has been that he is a patriot."

"He is somebody who is is has fidelity to the Constitution and he has confidence in his leadership. And the role he has played in his experience with him," Psaki said. "I can't speak to Anonymous, unconfirmed reports about prior conversations during the last administration."

Psaki added that the president "knows Gen. Milley," and said  "they've worked side by side through a range of international events."

"The president has complete confidence in his leadership, his patriotism and his fidelity to our Constitution," Psaki said.