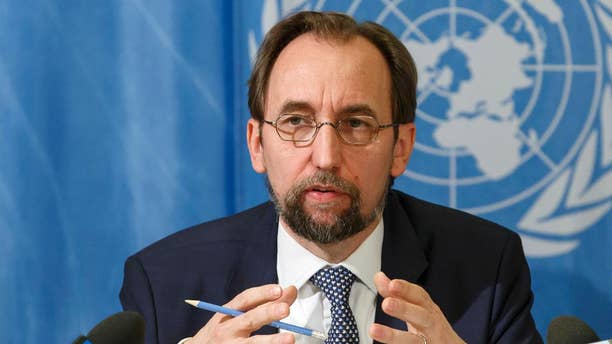 U.N. High Commissioner for Human Rights Jordan's Zeid Ra'ad al Hussein speaks to the media during a news conference at the European headquarters of the United Nations in Geneva, Switzerland, Monday, May 1, 2017. (Salvatore Di Nolfi/Keystone via AP) (The Associated Press)

The U.N. human rights chief – whose country prosecutes journalists for insulting the Prophet Muhammad – has jumped to the defense of media outlets targeted by President Trump.

Zeid Ra’ad Al Hussein, U.N. high commissioner for human rights and a Jordanian prince, stepped into the U.S. political arena Wednesday as he condemned the president for what he called his repeated attacks on “three of the most respected news organizations in the world.”

He said he was referring to The New York Times, The Washington Post and CNN and chastised the president for describing them as “liars” and “crooks.”

“To call these news organizations fake does tremendous damage and to refer to individual journalists in this way -- I have to ask the question: is this not an incitement for others to attack journalists?” he asked at a press conference Wednesday in Geneva, Switzerland.

“It’s really quite amazing when you think that freedom of the press, not only a cornerstone of the Constitution but very much something the United States defended over the years, is now itself under attack from the president himself, it’s a sort of stunning turnaround,” Al Hussein said.

“Ultimately the sequences are a dangerous one. You have incitement, fear, self-censorship, banning and then violence,” Al Hussein said.

But Anne Bayefsky, director of the Touro Institute on Human Rights and the Holocaust and president of Human Rights Voices, criticized the diplomat’s blunt attack on the U.S. president.

“The U.N. high commissioner for human rights -- knowing full well the United States has no intention of granting his hoped-for second term in office -- has launched an all-out assault on President Trump and the nation he leads,” Bayefsky told Fox News.

“The latest from this supposed democracy expert (and Jordanian prince) is to accuse President Trump of driving the U.S. democracy bus off a cliff. Apparently, Prince Zeid missed the civics lesson on the rule of law,” she said.

Al Hussein, educated at Johns Hopkins University in the U.S. and Cambridge, has served two stretches as Jordan’s top envoy to the United Nations. During that time, Jordan notoriously arrested newspaper editors for publishing cartoons depicting the Prophet Muhammad.

According to a report in Foreign Policy, during his tenure at the U.N., Jordan also supported resolutions cracking down on the “defamation of religion,” seen as part of the effort to ban blasphemy around the world.

Al Hussein, though, pointed to Trump as a threat to the press and said his criticism could have a chilling effect on the way other countries view journalists.

“These actions have consequences,” he said. “… I almost feel that the president is driving the bus of humanity and we are careening down a mountain path and in taking these measures, and at least from a human rights perspective, it seems to be reckless driving.”

The Trump administration is still thought to be considering pulling the U.S. out of the much-maligned U.N. Human Rights Council, which has been accused of spending too much time bashing Israel while leaving dictatorial regimes alone.