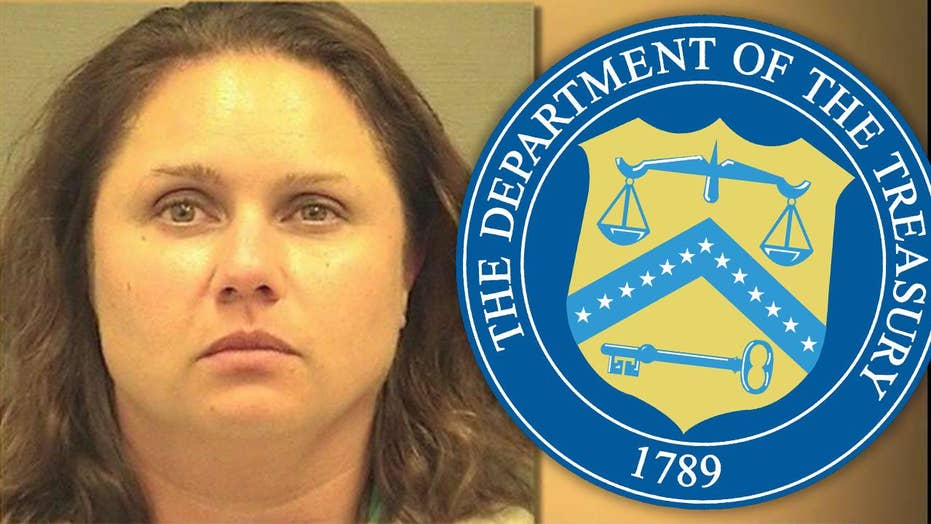 Senior Treasury Department employee charged with leaking confidential financial information on members of the Trump campaign to a reporter; Griff Jenkins reports on the arrest.

A former top Treasury Department official pleaded guilty Monday to conspiracy for leaking confidential banking reports associated with members of the Trump campaign, following her dramatic arrest in October 2018 as she toted a flash drive full of sensitive documents.

Natalie Edwards, 41, entered the plea in Manhattan federal court, where U.S. District Judge Gregory H. Woods set sentencing for June 9. Although the conspiracy charge carried a potential penalty of up to five years in prison, Edwards signed a plea deal with prosecutors that recommended a potential prison sentence of zero to six months.

Edwards was a senior adviser at Treasury's Financial Crimes Enforcement Network, also known as FinCEN. Prosecutors said her crime began in October 2017 and continued for a year, with Edwards sending a BuzzFeed News reporter numerous Suspicious Activity Reports (“SARs”). Banks must file SARs with the Treasury Department when they spot transactions raising questions about possible financial misconduct such as money laundering, but federal law strictly limited their disclosure.

The SARs related to wire transfers made by Paul Manafort and other figures in former Special Counsel Robert Mueller's investigation, including campaign official Richard Gates, Maria Butina and the Russian Embassy.

As law enforcement swooped in, she was carrying a government-issued USB flash drive containing not only thousands of SARs, but also "highly sensitive material relating to Russia, Iran, and the terrorist group known as the Islamic State of Iraq and the Levant," prosecutors said.

"Edwards is not known to be involved in any official FinCEN project or task bearing these file titles or code names," prosecutors said at the time.

"I am sorry for what I have done and I apologize to you, your honor, and the court," Edwards said.

Her arrest came on the heels of other high-profile, leak-related prosecutions under the Trump administration, which had pledged to go on the offensive against leakers whom the president has called "traitors and cowards."

Prosecutors pointed to about a dozen related stories published by BuzzFeed News over the past year-and-a-half, including an article headlined, "GOP Operative Made 'Suspicious' Cash Withdrawals During Pursuit of Clinton Emails."

Another article was titled, "These 13 Wire Transfers Are A Focus of the FBI Probe Into Paul Manafort."

She transmitted the SARs to the reporter by "taking photographs of them and texting the photographs" using an encrypted application, according to charging documents, which showed that Edwards eventually confessed to doing so. FBI agents obtained a pen register and trap-and-trace order for Edwards' cellphone during their investigation.

Edwards additionally sent or described to the BuzzFeed News reporter internal government emails or correspondence related to the reports and investigative memos and intelligence assessments published by her agency's intelligence division, prosecutors said.

When the judge asked her if she knew she was committing a crime, Edwards said she did not "know of the regulation" at the time but she knew about the federal Whistleblower Protection Act.

After consulting with her lawyer, Marc Agnifilo, she said she admitted that she agreed to disclose the SARs.

She added: "I was not allowed under the law to disclose it."

Outside court, Agnifilo said the case illustrated how "one's subjective motivations really do not serve as a defense."

"I am sorry for what I have done and I apologize to you, your honor, and the court."

He said prosecutors were "probably of the view that she was more politically motivated than she was for some conception like the good of our republic."

Agnifilo said his client believed "certain critical facts" weren't being handled in the right way by the government agencies tasked with handling them.

"She said: 'You know, if I can't trust government officials to handle this, I think I can trust the media to handle this and to bring this to the attention of the American people,'" the lawyer said.

Agnifilo said Edwards was in contact with congressional subcommittees and others in government but didn't believe they were dealing adequately with the information she offered.